When Pioneer was conceived and it was announced that there would be no starting ban list (beyond the fetchlands), everyone was pretty shocked at the cards they would be able to play on day one. "Oopsie" combo mistakes like Felidar Guardian? Ubiquitous format staples like Smuggler's Copter? Obnoxious pseudo-combo cards like Nexus of Fate? The delve cards that are banned in basically every relevant format like Treasure Cruise and Dig Through Time? Yep, they were all available at the start.

Well, of that crazy starting list pretty much everything questionable has been banned except for the busted delve spells. We even got a whole host of new cards that got banned too in Oko, Thief of Crowns, Veil of Summer, and Once Upon a Time! Dig Through Time and Treasure Cruise however, remain.

The major characteristic of the delve spells that makes them different in Pioneer from every other format they were legal in is the absence of fetchlands. Polluted Delta, Misty Rainforest, and friends are not only the backbone of almost every mana base in Modern, Legacy, and Vintage, but as yet another benefit they also do a wondrous job of filling up your graveyard very quickly. This, coupled with overpowered cantrips and an abundance of powerful one-mana spells, makes casting fully effective copies of Dig Through Time or Treasure Cruise as early as turn three a startling reality. However, without fetchlands you actually have to put spells into your graveyard naturally to delve away. There aren't any cards like Thought Scour, Serum Visions, Lightning Bolt, or Mishra's Bauble in Pioneer, meaning it's harder to fill your graveyard early as well.

This has left Treasure Cruise mostly on the bench, as an unmanipulated "draw three cards" is okay, but if you're just drawing a bunch of air like Opt and Chart a Course anyway it's very easy to waste all your time spinning your wheels and not getting anywhere. Treasure Cruise has seen play in Izzet Phoenix and other spell-heavy variants, but for the most part has been a minor part of the format.

And endure it has.

As Pioneer is more fleshed out and new sets are added, more and more combos are finding their way into the limelight. We already had Lotus Field "Storm" decks, as well as some niche Jeskai Ascendancy combo decks, but Theros Beyond Death brings us two new combo contenders:

The majority of the talk about the Player's Tour events this weekend has centered around the new combo of former bulk mythic Inverter of Truth in conjunction with new Theros Beyond Death standout Thassa's Oracle (and to a lesser extent Jace, Wielder of Mysteries).

The combo itself is fairly rudimentary; find both pieces with Dig Through Time and standard control elements, cast Inverter of Truth with a small graveyard to make your library small, then cast Thassa's Oracle and win the game. Jace provides a backup win condition that is also a reasonable card advantage planeswalker.

At the center of it all however is Dig Through Time.

Dig Through Time as a cheap, instant speed source of both card advantage and a double Demonic Tutor has always been one of the best combo enablers ever printed. You don't lose to this deck because they have assembled some sort of unstoppable voltron combo that breaks the game in half. You lose to this deck because they cast Dig Through Time three times and run you into the ground, then finish you off with the combo.

This deck is likely going to be one of the most popular decks at the Player's Tour events, and will probably be the death knell for Dig Through Time in Pioneer.

Perhaps the more archetypical "combo" card, Underworld Breach has been turning heads since it was previewed as a homage to one of the most broken cards of all time in Yawgmoth's Will. In Pioneer there are no rituals, however, so instead the combo turns to some garbage Blue commons from Return to Ravnica block.

Tap a Chronic Flooded-enchanted land to mill three cards, untap it with Hidden Strings, recast Hidden Strings from the graveyard with Underworld Breach, repeat until you find Thassa's Oracle. More steps than the previous deck, but fairly deterministic.

While there are straight

versions of the deck that look more like Modern storm and eschew Dig Through Time as it is too taxing on the graveyard, there are also versions like the one above that hybridize with the Lotus Field combo deck that has been making the rounds for the last month or so in Pioneer. These decks want Hidden Strings anyway so it is an easy graft. The more "normal" Lotus Storm decks that don't play Underworld Breach look like this:

No deterministic loops here, just raw mana and card generation leading to a big kill. Without Underworld Breach taxing the graveyard this becomes a full on Dig Through Time deck, looking to cast it multiple times per casting with Doublecast and Expansion // Explosion. Without Dig Through Time it is very unlikely this deck could exist, and before the question marks that Underworld Breach added this was the de facto best combo deck in the format.

However, that's not all Dig Through Time does. 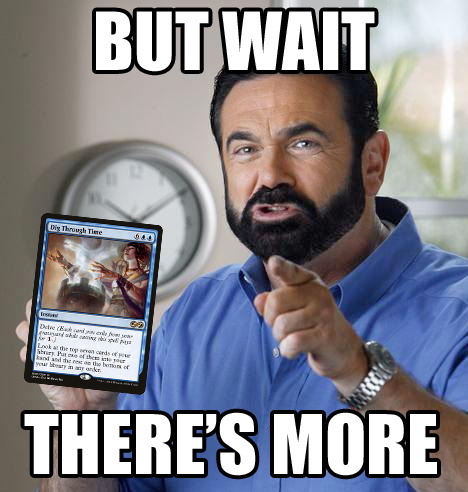 It's also one of the premier control engines in the format as well!

...to the slightly more eccentric

... Dig Through Time is the preferred endgame engine; sometimes alongside Torrential Gearhulk.

This of course has precedence. While Dig Through Time is more well known as one of the best combo enablers of all time, it has been used in many fair decks as well to chain together and shut the door, finding both win conditions and the proper reactive answers.

My answer for you is "very soon."

Combo decks can be a fun and exciting part of any format, but only if they are somewhat fringe and flimsy. The long turns that Lotus Field or Underworld Breach decks take are more reminiscent of Legacy or Modern than Standard, and a Splinter Twin-style two card combo grafted onto an already reasonable deck is also not an idea scenario. Dig Through Time is the card that brings the level of consistency necessary to succeed to these decks at a relatively painless rate and cost; it's hard to see a world where Dig Through Time is not eventually problematic.

Enjoy playing your copies of Dig Through Time in the only major format it's legal while you can, because there's no doubt its days are numbered.