No not that one, the other one!

I can vividly recall how I felt back in 2003 when it was announced that Wizards of the Coast would be changing the card face for Magic - feelings of betrayal, loss, fear... like something I loved was being taken away from me and twisted, completely out of my control. It was a commonly shared feeling at the time, to the point the Mark Rosewater had to write this article in an attempt to calm everybody down: 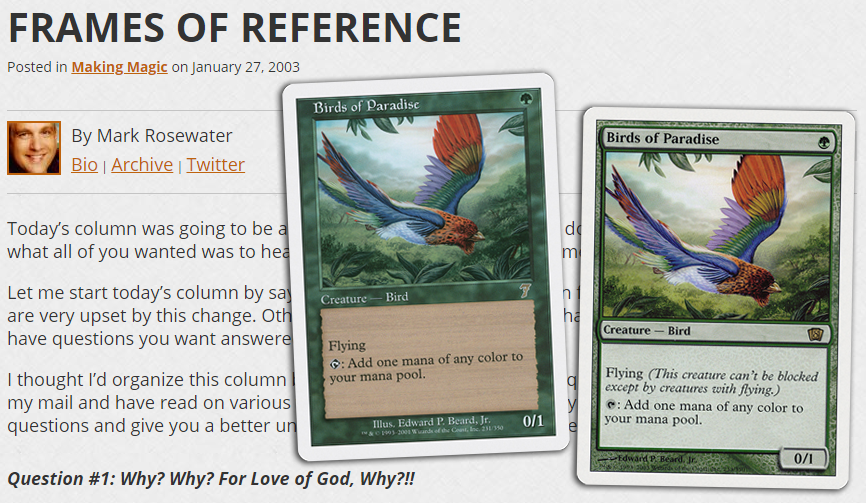 At the time I felt like the world was ending and Magic was on its deathbed, but unsurprisingly it was not. The new card face has clearly been fine for the last few decades, and while it may lack a bit of charm it is certainly much more readable and accessible than the original. This point has been driven home by the previewing yesterday of a bunch of white Time Spiral Remastered cards, as while I love the old card face the White cards are pretty hard to read.

Like many of the big changes over the years, Magic has endured. One might even say that the game is better for it, as it usually is. I'm also older and wiser now, and at least try to look at the big picture before having that gut-reaction.

Which brings us to the current hot topic at hand, the announcement of Magic's new Universes Beyond brand:

Among those worlds are the expansive universes of Warhammer 40,000 and The Lord of the Rings, with others set to join as our Universes Beyond expands."

- "MAGIC'S VOYAGES TO UNIVERSES BEYOND" - Wizards of the Coast

The introduction of other IPs (intellectual properties) into Magic is a fairly new one, first giving us the Godzilla Series Monster Cards:

These were re-skins of cards already in the set with art and names from the Godzilla franchise - for example, Mothra, Supersonic Queen standing in for Luminous Broodmoth. For the most part these were well received, despite the initial shock and confusion when they were announced.

The next step was the The Walking Dead Secret Lair Drop, a set of six black-bordered, mechanically unique cards that are legal in Commander, Legacy, and Vintage and were only available for a short time. The backlash to this Secret Lair release, the first to contain new cards rather than reprints, was extremely harsh from the community, but it would go on to become the best-selling Secret Lair by a significant margin.

Which brings us back to yesterday's announcement that these sorts of IP crossovers are only the beginning. Today we're going to delve into what this means for Magic, as well as the pros and cons to these sorts of crossovers.

They Make Wizards Of The Coast Money

We sure do live in a society, and like it or not Wizards of the Coast is in the business of making money. Please note however that this isn't necessarily a bad thing.

We want Wizards of the Coast to make money, so they can stay in business and keep making the best game of all time. If Magic: The Gathering didn't make money, it would have been a one and done back in 1993. It is because Magic makes money that we have multiple new sets a year, MTG Arena, large events, and more. Wizards of the Coast isn't evil for wanting to make money, they're evil because they printed Uro, Titan of Nature's Wrath. The Secret Lairs have been a huge financial boom for Magic as a brand, which makes it no surprise that Magic made more money last year than it ever has before.

The concern here is that they aren't jettisoning the future of the game for short term profits, that the plan for the growth is to be sustainable long term rather than just a cash grab, as well as making sure the game itself is affordable enough to play and doesn't price out its player base.

They Get New Players Into The Game

If someone starts playing Magic because they got The Walking Dead Secret Lair for Christmas, that's awesome! The entire point of bringing other IPs into the game is to reach new potential players, as these IPs already have their own devoted and dedicated fanbases. A random person off the street isn't going to care about what Jace and Chandra are up to, but if you put familiar faces on the cards to get them into the door that could be the path to gaining an eventual Magic player.

They Offer A New Layer Of Enjoyment

It's funny watching people react to the various new crossovers and secret lairs that have been happening. Someone who has complained about them in the past but is a huge metalhead gets super excited about the Party Hard, Shred Harder Secret Lair because now it's about something that they enjoy and are passionate about.

There's no doubt there's going to be hits and misses when it comes to Secret Lairs, as the only unifying factor we have as Magic players is that we all like and play Magic. Our other interests vary, but when the crossover hits the right spot it can create excitement in a way Magic alone can't. The counterpoint to his is that there's an amount of fatigue when you keep seeing products that "aren't meant for me," but there's no mistaking that the hits connect super well.

I know you've been clutching your pearls waiting for this moment, so let's look at the downsides:

They Pollute The Magic IP / Cheapen the Brand

This is the response that creates the most emotional and visceral opposition to these sorts of crossovers, and it's a valid one. The question of "we already have a great IP/story/history, why do we need to input other IPs? Isn't ours good enough?" is a very real one.

This is also an issue because Magic's story hasn't been very strong of late. There was a period where it was clear there was a Gatewatch and Nicol Bolas was causing trouble, but as someone not super invested in lore I have no idea what the story behind the last few sets has been. If Magic's core storylines were stronger, then I think there would be less fear of other IPs overpowering them. 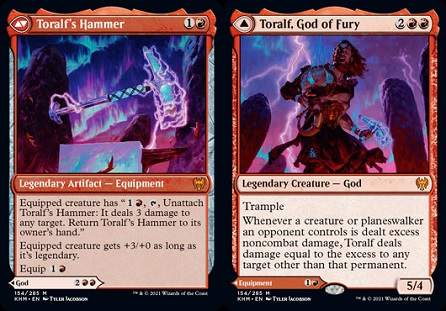 The counterpoint here is that Magic already does this, in a way. Would we feel differently about Toralf, God of Fury if it was just "Thor, God of Thunder" and had Chris Hemsworth's smiling face on it? Is being obviously Thor different from actually being Thor? Where's the line?

The Awkwardness of Mixing Worlds

There's a level of immersion when it comes to taking in any sort of fantasy or world-built content. When you watch Lord of the Rings or a Marvel movie, you get taken to a certain place with certain expectations. The same is true of Magic; when we open a booster pack or see a new card, we have a general expectation.

Seeing your opponent cast Iron Man, Bill the Pony, or MechaGodzilla can damage that immersion. Furthermore, as more and more IPs get introduced into Magic, we end up in a potential fan fiction paradise where we are equipping Darth Vader with Captain America's Mighty Shield so we can safely attack the Dr. Who planeswalker.

This can be jarring, just like if Donatello randomly showed up at the Inn of the Prancing Pony to have a drink with Pippen. It's just not grokkable.

So, Magic has used the crossover IPs to help get new players into the game. Great!

But what happens when they bring their Hobbit deck to FNM to play and they're told that none of the cards are legal in Standard, only in Legacy, Commander, or Vintage? Talk about walking barefoot right into Mordor!

Not Being Able To Opt Out

Perhaps the biggest issue with all of this is when the player isn't given the ability to opt out.

With the Godzilla reskins, you can choose to play them if it's your thing, or just not if it isn't. You can't control which cards your opponent plays, but your own personal experience is dictated by you. As someone who is completely uninterested in alternate arts, promos, or pimping my cards, I have zero interest in anything "fancy" when it comes to my Magic cards. Honestly? I personally think they're hideous. However, that's just me! I think it's great that players who like that sort of thing have that option.

The issue is that when it comes to The Walking Dead Secret Lair Drop cards there is no ability to opt out.

Cards like Rick, Steadfast Leader or Glenn, the Voice of Calm are playable in older tournament formats, and if I want to play the most competitive humans or whatever deck and need to play them, I am given no other option if I want to be competitive. Furthermore, because the cards are only available from the limited-edition Secret Lair drop, I may not even be able to get them. I also can't get them in non-foil, a problem we've already seen with Nexus of Fate.

This is the major reason for the backlash on The Walking Dead Secret Lair. You can take or leave the IP, but mechanically unique, black-bordered, tournament-legal, foil only, limited run Magic cards are a major issue for multitude of reasons.

Magic: The Gathering is the original "Collectable Card Game," but being a game at the same time as a collectable creates unique problems.

There's no doubt that Magic is a game first and foremost. It was originally conceived as a game, with the collectable element being more of a factor in the game itself than anything else. Ancestral Recall isn't rare so it would be an expensive collector's item, it's rare because it's a stupidly powerful card and Richard Garfield only wanted it to show up once and a while. He never conceived people would buy so many packs that obtaining whatever cards they wanted wouldn't be an impediment.

However, as time has gone on and the market for Collectable Card Games became more defined, the collectability aspect is undeniable. Things like foils and promotional cards tap into this, as well as alternate arts and all sorts of new versions of cards like we've seen from the Secret Lairs. We've seen this with baseball cards, comics, coins, Beanie Babys, and all sorts of other collectables.

The important thing to note here is that there is no gameplay difference in almost all of these scenarios. If you like collectables you can go crazy pimping out your deck with fancy and expensive foils, but a Japanese Foil 7th Edition Birds of Paradise still taps for mana of any color just like a heavily played Revised Birds of Paradise. If you're a gamer, you can game, and if you're a collector, you can collect. Both sides can pursue Magic how they see fit.

Issues tend to arise when Wizards of the Coast tries to hit both of these demographics at once.

There And Back Again

Which brings us back to The Lord of the Rings and the IP crossovers.

What I am sure of though is that when it comes to change and new things, Magic players have an awful tendency to react like overprotective gatekeepers. Not everything is going to be for you, and frankly you're not going to love everything about something as large and all-encompassing as Magic. When we see a new thing for the first time, thousands of hours have already likely gone into it by people whose jobs it is to get it right.

Am a little worried about the direction that IP crossovers can go in? Absolutely! But I'm also willing to accept that it could be a great thing for the game if done right.