What's Up BRO? It's Our First Look At The Brothers' War! For much of the first ten years of Magic's history, most of the story and background for each set was placed on Dominaria, with characters like Urza, Karn, Mishra, and more.

Urza, Mishra, Yawgmoth, and more are referenced on dozens of cards, but were often larger than life because of this. Eventually both Urza and Yawgmoth would get their own cards in Modern Horizons 2, but it always felt like we've never seen them at their full power. We've spent a lot of time lately hopping from plane to plane, be it Kaldheim, Innistrad, or Strixhaven, but with Dominaria United returning the story to Dominaria we will now be continuing the trend in The Brothers' War, albeit in the distant past.

We got our first look at The Brothers' War yesterday during the Daily MTG stream on the main Magic Twitch account, giving us a glimpse at what the set is going to be all about, as well as finally showing us Urza as a planeswalker. Today I'm going to go over the previewed cards as we piece together what we can expect from the set. 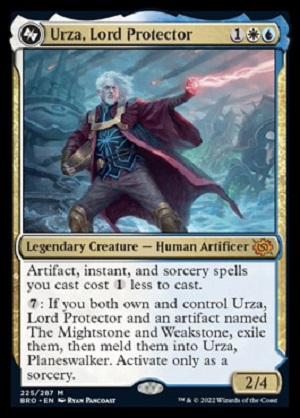 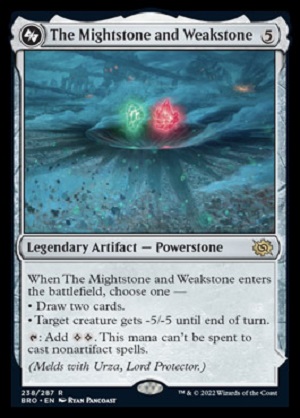 Meld, the oft forgotten mechanic from Eldritch Moon that was on three cards and never used again, returns in a huge way on the face card for the set. The artifact The Mightstone and the Weakstone has the meld ability, allowing it to join with Urza, Lord Protector to form Urza, Planeswalker.

Prepare yourself, because Urza, Planeswalker is unlike any planeswalker we've ever seen before. 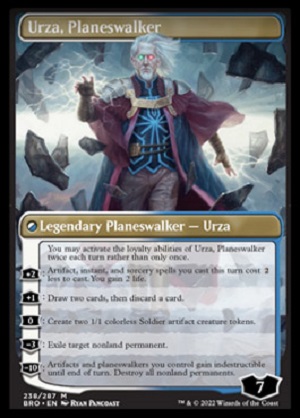 Five abilities! Two abilities a turn! Urza, Planeswalker quite literally does it all. Urza does so much it wouldn't fit on one card, which is why you need the back of two to make it work.

We're talking cost reduction, lifegain, card draw, token creation, removal, and a one-sided board wiping ultimate that happens very fast - and you get to use two of these in a turn! There's no doubt that Urza, Planeswalker is the most powerful planeswalker ever printed once it's on the battlefield, but of course the issue is actually getting Urza onto the battlefield. 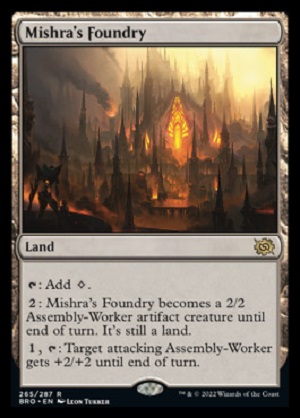 Mishra's Factory is perhaps the best creature land ever printed, so it's logical to take notice of the fixed version.

Mishra's Foundry is extremely similar to Mishra's Factory, doubling the activation cost, and swapping the pump ability to cost a mana and give +2/+2, but only to attacking Assembly-Workers. The double activation cost is obviously a pretty large nerf, but still well within range of playability in Standard, Pioneer/Explorer, and maybe even Modern. The change to the pump ability is also a welcome one, as one of the most common mistakes made in Cube drafts is not recognizing that Mishra's Factory can activate to block, and then give itself +1/+1 making it a 3/3 on defense with no additional mana invested.

The history of good colorless lands in Standard bodes well for Mishra's Foundry. The most recent, Faceless Haven, was banned because it was so ubiquitous among mono-colored aggressive decks, while Mutavault was one of the most played cards in the format both times it was legal in Standard. Mishra's Foundry feels right in that range as far as power level, as while it's a hair less efficient there will surely be upsides to being an artifact in the artifact set.

Mishra's Foundry will likely be one of the most played cards in all of The Brothers' War. 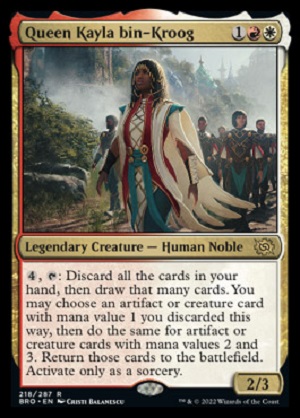 Queen Kayla bin-Kroog is reminiscent of a lot of the rares in Dominaria United: medium mana cost, seemingly narrow effect. However, her ability, while expensive, is actually very powerful.

As we know from Madness, every time a card you discard ends up being played instead, it's essentially the same as drawing a card. Four mana is a lot to spend in your main phase, but if you discard the right cards, you can get all that mana back and more, as well as card advantage to boot! Even if you just discard a three-drop and a two-drop, you're plus one on mana spent and plus two on card advantage, which is incredible.

Plus, there's the fact that this card is just really fun too! Playing with the graveyard and drawing a bunch of cards are two very fun and powerful things to do in Magic, which makes Queen Kayla a very sneakily powerful card.

However, individual cards aren't the only very exciting thing about The Brothers' War. 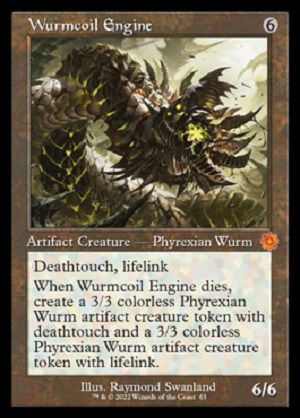 Every pack of The Brothers' War will have a slot dedicated to a retro artifact card in a retro frame, which will be a reprint of a classic artifact from Magic's history. These cards will not be legal in Standard, but they will be legal in the limited formats. Not only is this a fun way to introduce reprints in the highly desirable old border, but this adds a very fun and unique element to the limited format.

Having the Mystical Archives took Strixhaven from a good to a great Limited format, as it really did feel like these mystical and classic spells were coming out of the woodworks to help you win (or lose) your games. This was also a thing in Time Spiral with the timeshifted sheet, where it again brought a very unique and fun element to the limited format.

This is going to be a slam dunk.

It's just a sneak peek, but The Brothers' War is off to a great start. Tapping into nostalgia with classic characters and the beloved old card frame is a great place to be, especially after visiting so many different planes, so as long as Wizards of the Coast can provide enough great new stuff to go with the nostalgia, as well as continuing this new Phyrexian storyline, this could be a phenomenal set.

I'd say I'm looking forward to it, but I'm still excited about Dominaria United and preparing for Worlds. One thing at a time, but when we get there, it looks like it's going to be awesome!