Isn't it weird how a card can go from villain to hero?

Lurrus of the Dream-Den was the scourge of Magic when Ikoria released. Before the companion rule was changed, Lurrus was the centerpiece of almost every deck in every format, to the point of absurdity. Now with the new companion rule in place, Lurrus sees a bit of companion play across Modern, Standard, and Historic, but is more a fun feature than oppressive.

Lost in all of this is the fact that you can just play Lurrus as a normal Magic card!

That's exactly what we are doing this week with Lurrus Squad, a deck I've been playing over the last few weeks to excellent results. I did a full writeup about the deck last Friday right here on CoolStuffInc.com, so let's get right to the games! 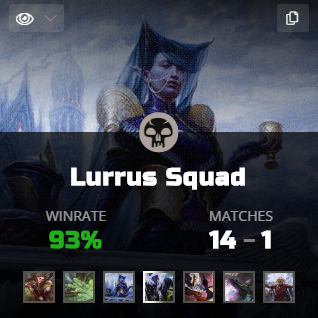 I've been on an absolute tear with this deck on the MTG Arena ladder both before and after the Uro, Titan of Nature's Wrath ban, which continued right into this video.

While the flexibility of the deck was on full display as we got to use most of our sideboard across all five matches, I just want to highlight how awesome this deck's mana base is. We have 16 lands that do nothing but cast our spells, while the other 7 are both slam dunk home runs. Agadeem's Awakening is already just a really solid card in general for a Black creature deck, but has extra value with Archfiend's Vessel and Ayara, First of Locthwain. And speaking of Locthwain, how awesome is it to get into a resource battle with someone when you've got Castle Locthwain in play? You just trade resources back and forth until you both run out, and then oops your Swamp just starts drawing you cards!

This is an awesome and fun deck for the new Standard format, which also rewards tight play and matchup assessment. Figure out what the games you win are going to look like for each matchup, and play and sideboard accordingly. Enjoy!