Thanksgiving has come and gone (boy that that came fast) and has us both looking forward at the holiday season as well as back on an absolutely wild couple of years.

Much happened in 2021 both within Magic and without, with an unbelievable number of cards printed, a return to some large in-person events, as well as alterations to professional play and Magic as a whole. As Magic has been around for almost 30 years change is always inevitable, some for good, some for bad.

Today in the spirit of the season I wanted to take some time to go over five things I've been thankful for this year!

Falling in Love with Limited Again

Much of my rise to the public eye came playing Constructed on the SCG Tour, so it may surprise people to know that I actually started my competitive Magic career as a Limited player. I cut my teeth on Magic Online drafting Onslaught Block and Mirrodin block four or five times a day and all my early major events like PTQs and Grand Prix were Limited. While my first PTQ win was in Extended, I immediately followed it with a Limited PTQ win before even playing in my first Pro Tour, and took 24th place at Pro Tour Prague 2006 which was an all-draft Pro Tour

However, because I focused on the SCG Tour for so long I became a pretty much 100% Constructed guy.

This year I started drafting again on stream in a series I do called Bronze to Mythic, where I start drafting a new format with an account at the bottom of Bronze and track my progress through every draft all the way up through Mythic. I had done these runs once or twice before, but the reception was so good during my Kaldheim run that I decided to do it every set.

Not only has the series gone over very well, but I've had an absolute blast getting back into Limited Magic! Despite the somewhat rough spots of Constructed over the last few years, Limited design has been experiencing a renaissance, making it the perfect time to get right back in. I still love Constructed and play it a bunch, but there's something awesome and comforting to just firing up a draft without needing to build a deck or do any prep work and just think on your feet all the way through.

It's good to be back!

When MTG Arena released, it was one of the most important moments in Magic's history. Magic finally had an online client that was worthy of the 21st century, that was ready to support current players, bring in new players, and bring back lapsed players.

The last few years haven't been as wonderful (which is perhaps a topic for another day), but the one shining gem has been MTG Arena making the jump to mobile play. When MTG Arena came out and it was announced that it would eventually come to tablets and phones I was extremely skeptical.

Playing on a tablet seemed reasonable, but on a phone? What happens if you try to play a Scute Swarm or Krenko, Mob Boss? However, the mobile release has far exceeded any and all expectations. It's crisp, easy to play, and well scaled for the smaller screen. It's got full functionality and honestly there's nothing like firing up a draft or jamming a quick match of Historic while you're waiting at the DMV or on a quick bathroom break.

The rest of the platform may be suffering, but the mobile port completely knocked it out of the park.

Look, it can't be all Magic, all the time! 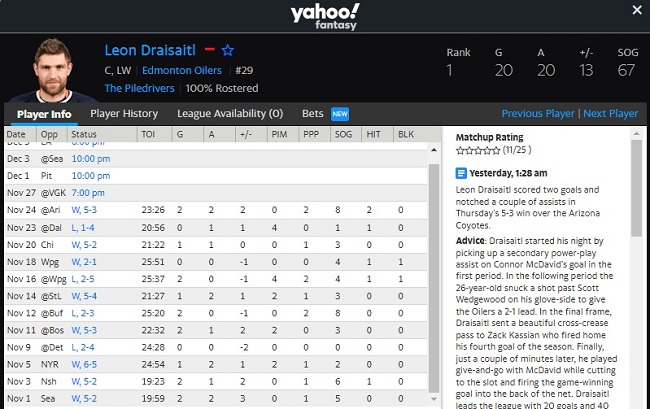 Those who know me know I'm a rabid hockey fan and I've run a very serious fantasy hockey league for the last seven years. It's a "keeper" league, meaning you keep a certain amount of your players each year and has full NHL sized rosters making it a very intensive league.

As such, I've had the pleasure of having Leon Draisaitl on my team for the last few years, which has been an absolute treat.

To put it into Magic terms, Leon has been essentially the Koma, Cosmos Serpent of fantasy hockey this year, in that if you have him on your team (in your draft deck) it kinda feels like you're cheating. With 20 goals and 20 assists already in only 19 games, Leon is on a pace that makes even the best players in the league (like his teammate Conner McDavid) look like late pick commons.

You may see me on stream in my Draisaitl Edmonton Oilers shirt... well now you know why!

Speaking of the stream, it was over two years ago where I was playing Goblins on stream and someone said that I should play goblins every week. I joked that it would get old pretty quick, but Twitch chat kept pressing the issue and Mogg Monday was born.

I've played Goblins in some way, shape, or form on my stream/YouTube every single Monday for the last 111 Mondays, and it's been not only fun to have a set part of my schedule every week (it was the only thing that kept the calendar relevant during the heat of the pandemic) but also a fun challenge to come up with different and unique Goblin content each week.

Along the way I've commissioned a theme song by the wonderful Skatune Network as well as had an intro put together, making it the first step into what I'd like do more of in my content.

And to think that I didn't even want to do it when it was first suggested!

One of the things I hadn't made time for in the last few years was the updating of my Cube.

My Cube has been around for a long time, well over a decade for sure, and was drafted very often and carefully curated. I've written a number of articles about it before and lots of very good Magic minds would draft and discuss it, as we all learned about what worked and didn't work.

However, lack of free time is always the enemy, and between buying a house, moving, and so and on and so forth my Cube ended up sitting on the shelf and collecting dust for a few years.

Well, this year I finally carved out the time to lay the whole thing out and completely update it!

It was a very enjoyable process, as one of the best parts of owning a Cube is the actual curation of it, and now the only issue is finding enough time to set up drafts! Still, the drafts I have been able to do with it have been very fun, and I'm excited to see it back in action. While I haven't been a huge fan of Modern Horizons 1 or 2 in Modern proper, the cards have been very fun in the high powered Cube environment.

While I will definitely be doing some Cube content in the future right here on CoolStuffInc.com, talking about the design of the Cube and how to design your own Cube, I did do a "Cube Sleeving Stream" on my YouTube and Stream where I hung out and talked about all the cards in the Cube while I sleeved them which could hold you over.

It hasn't been an easy couple of years, but it's always important to try and find the positive and look back on the things you've been happy with. I'm incredibly fortunate that I get to do Magic content full time for a living, and also incredibly thankful that I get to have a place right here on CoolStuffInc.com to share my thoughts with you all. I'm even more thankful that you're here reading this right now!

I encourage you to find the things that you're thankful for, however big or small, and make sure you focus on them both in the moment as well as when you think about how the next year is going to go. I hope you had a wonderful Thanksgiving and have a great holiday season too!