Thousands of years before the war between the brothers Urza and Mishra raged, the Thran prospered on the plane of Dominaria. This advanced race of people were artificers and lived their lives thanks to the technology and magic provided by various powerstones. The floating capital city of Halcyon was a wonder to behold, with its crown jewel being a mirrored temple that hovered high at its center.

Today, it is but a legend, forgotten largely to memory. A major tragedy befell the Thran Empire and it fell to ruin, with relics remaining littered across the plane. 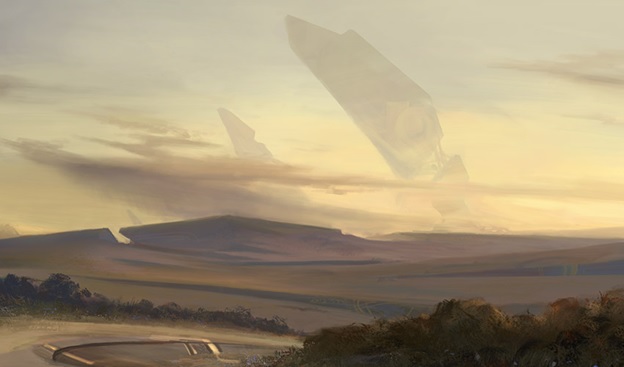 But it was not always this way. It was a land propelled forward by the combined genius of two Thran artificers: Rebbec and Glacian.

The two were lovers, working in harmony with one another. Rebbec conceptualized grand ideas to help enhance the mighty Halcyon, while her husband Glacian developed the technology that could make these ideas a reality. With powerstones, anything was possible, and the pair of Rebbec and Glacian made anything possible.

That is, until one day, an untouchable named Gix rose from the depths of the Caves of the Damned to the power rig of Halcyon. There he ran into Glacian - tending the rig with his band of goblins - who he proceeded to stab with a powershard fragment in revolt against the people in the floating city. The wound caused by this attack left Glacian incapacitated, and the healing mages of the city were unable to heal him, their magic actually worsening his condition. At the behest of Rebbec, the city called for this man: 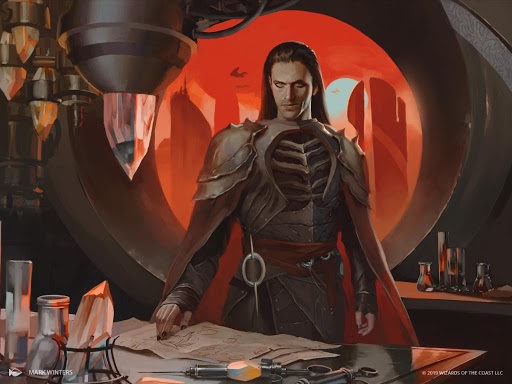 Yawgmoth had been previously exiled, along with his band of fellow eugenicists, for what was seen as heretical talk of germs and the concepts of surgery. To you and I, this might seem odd, but it was a very serious matter for the people of the Thran who healed exclusively with magic. As it clearly didn't work for Glacian, the man who basically kept Halcyon running, the leaders and Rebbec were desperate to try anything. And so Yawgmoth studied Glacian - and soon Gix, also plagued by the powerstone sickness known as phthisis - while simultaneously winning Rebbec's love and accumulating power within Halcyon.

His machinations bore fruit and he became a major force within the city, but he wanted to do more than that. Then, one day, a planeswalker by the name of Dyfed came to visit Glacian, believing him to hold a latent planeswalker spark himself. Yawgmoth walked in on their meeting, discovering the nature of what a planeswalker was, and encouraged Dyfed to find him a plane where he could take the sick to heal them. This plane would come to be known as Phyrexia, with Yawgmoth coining the term from phyresis to mean progress.

Here Yawgmoth ruled and took hold of the plane as he saw fit. Dyfed made accessing the plane far easier with the help of a portal within the Caves of the Damned, allowing the sick to escape to Phyrexia with ease. The gateway was opened by splitting a powerstone in half, with Yawgmoth taking the halves and - unbeknownst to Dyfed or Rebbec - stuck them inside the sick, wounded, and delirious Glacian.

Soon after, armies and messengers from across Dominaria found themselves in the city of Halcyon to bring Yawgmoth in to answer for numerous heinous crimes including spreading disease, genocide, torture, and so on. Yawgmoth refuted these claims and started a war that would soon send the great Thran Empire to ruin.

Fearing what Yawgmoth had become, Rebbec begged Dyfed to take some of the sick and elderly to another plane, safe from Yawgmoth's twisted influence. Here she found a plane called Mercadia and left the people in the hands of the resourceful goblins - who would later come to rule the land. From there, Dyfed went to Phyrexia to confront Yawgmoth, who took her to the inner spheres where she saw the horrors of people being warped into monstrous beings. There, Yawgmoth stabbed her, keeping her alive barely enough in attempt to harvest the planeswalking organ, which he was unable to find.

Soon after this, war broke out in Halcyon. Yawgmoth and his forces overtook the armies of the world with ease, but not before destroying the city and forcing his own people to flee for their lives to Phyrexia. Fearing what would become of this madness, Rebbec - encouraged by the fading Glacian - took the powerstone halves and sealed the portal to Phyrexia, dooming herself in the process. Here the ruins would lay for millenia, until Urza and Mishra eventually would come to find it, with Rebbec and Glacian largely saving the world of Dominaria from certain doom at the hands of the Phyrexians then and there.

When I first read this book - which you can pick up to read off Amazon for a whole $5 - I quickly fell in love with each of these characters. While we barely saw Glacian coherent through the story and Rebbec had some questionable character flaws written into the story, I still couldn't help but enjoy them as they were. So when Commander Legends rolled around, I knew I just had to make a Commander deck for them. Here it is:

Despite being one of Magic's most important power couples, building a deck with these two as commanders actually proved a little more tricky than it might first appear. My first thing I did was to start poking around the various artifacts with the deck's color identity, but what I realized was that several of them have tap abilities, making it hard to use them effectively with Glacian. Then I thought about spitting out tokens, since they could be used well with Glacian, and putting equipment on them. Since the equipment can be tapped and still worked, this sounds great... with one problem. Rebbec gives all your artifacts (here, likely artifact creatures) protection from CMCs of artifacts you control, meaning your creatures suddenly gain protection from the equipment, rendering it useless.

I then looked for artifacts that had static abilities that could allow you to tap them for Glacian's ability. The first two that came to mind were the likes of Howling Mine and Winter Orb. These two are particularly well known because their abilities shut off when tapped, meaning you could manipulate them to benefit you while harming your opponents. I also noticed after checking out those two that a lot of your typical Stax abilities also fit into this category. What I mean is cards like Ensnaring Bridge, Trinisphere, Thorn of Amethyst, Sphere of Resistance, Static Orb, and so on. When I think of fun, though, I tend to not think of Stax, so I instead tried to focus on cards more like Coercive Portal or Unwinding Clock that impact the game but don't make everyone miserable in the process.

The deck doesn't have too much by way of creatures, so we have to improvise a little bit. Sai, Master Thopterist and Efficient Construction both spit out tons of small thopter tokens to help push things along. Sharding Sphinx does similar things, but on a somewhat less efficient scale, until you get a few other thopters on the board as well. The tokens can be used for more than just Glacian's abilities as well. Urza is quite good at making little critters into mana to fuel your more powerful spells. Mycosynth Lattice also works really well with cards like Memnarch and Darksteel Forge too. If you need a big finish and can't quite get there with your thopters, then there's always a good ol' Blightsteel Colossus to clean up the game.

I tried to include as many cards referencing The Thran and a bit of the Urza block that references a lot of its technology, but as it happens, not many of the cards are all that good. Have you read cards like Thran Golem, Thran Lens, and Thran Weaponry? They're really just not that great. Fall of the Thran is good, but mass land destruction is kinda frowned upon at most tables. Thankfully, we still get a few great references thanks to the likes of Thran Temporal Gateway, Thran Dynamo, and Evra, Halcyon Witness, who was born from the light of the null moon at the end of the Thran Wars.

In truth though, when building the deck I was struggling to find ways to make it different from my favorite Sharuum deck - which I actually stuck both Rebbec and Glacian into the moment I got them. This proved kind of hard given the deck-building issues I faced, but I like to think I was still able to make it as distinct as possible in the process. Both are ultimately artifact control decks that win with a big finish, but I think this one is still a great deck if you're looking for something sweet to try out.

Give the deck a spin and crush your foes with the original enemies of Yawgmoth, one of Magic's greatest villains ever.