In 2008, I quit playing Magic. Moving from New York to Florida a few years earlier meant I lost my entire playgroup and I never really found another one in my remaining years of high school. As things tend to go, however, it was more of a break than leaving the game for good. In 2010, during my second year of college, I discovered an all-new playgroup that began to pull me back in.

I picked up a few items to get myself started back up a bit: A Deck-builder's Toolkit or two, a copy of Premium Deck Series: Slivers, Duel Deck: Elspeth vs. Tezzeret, and a couple rare repacks to get the casual juices flowing. I played a few small games with casual 60-card lists until a friend introduced me to Elder Dragon Highlander, or EDH, a format we now know as Commander.

My first deck was pretty poor. The only legendary creature I had at the time - besides Sliver Overlord, that is - was Sek'kuar, Deathkeeper. I tried building what I could out of what little collection I'd been able to put together but nothing really was working. Then I bought a three-pack bundle in a local Target which had a Shards of Alara pack and opened my first ever mythic from a pack in the process: Sharuum the Hegemon.

When I sat down and started looking at my cards, I realized I actually had a lot to turn this legendary creature into a somewhat functioning deck. By cannibalizing the Duel Decks, as well as taking a few bulk rares and cards I opened from then current sets like Scars of Mirrodin, I was able to get something together. It largely started with silly janky Myr combos before I started making it the home of bigger and better cards. Things like Master Transmuter, Argivian Archaeologist, and Darksteel Forge all started to find their way into my list.

Over the years I've built it up, keeping things somewhat on the stronger end of casual builds in the process. Now, within the last few days, a brand new card has shown up in Throne of Eldraine that makes me excited to add it into my list: Emry, Lurker of the Loch. 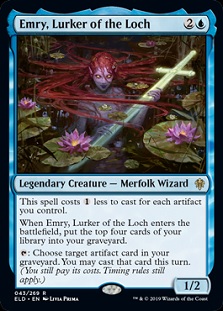 Now look, strange women lying in ponds distributing swords may not be a basis for a system of government, but they definitely work fantastically in an artifact deck. They especially work well in one that likes to recur cards from the graveyard. This is where Sharuum, a commander who likes to pick play cards from said graveyard, comes into play.

There's so many things at play with Emry. With a non-keyworded Affinity for Artifacts ability on her, she can come down for the low cost of one Blue mana. That's especially easy when our deck is loaded with artifacts, including artifact lands. She then mills you four cards when entering the battlefield, opening up all kinds of possibilities with not only Sharuum, but other recursion cards like Archaeomancer, Animate Dead, and Crucible of Worlds.

Last but not least, she can allow you to play artifacts from the graveyard just by tapping her. While this may not be something you want to do for a card like Darksteel Forge, as an example, you can still repeatedly cast cards like Courier's Capsule for tons of card draw. You can even put Sharuum into your graveyard if she dies and recast her with Emry to avoid the Commander tax!

There's tons of ways to use her so let's have a look at my list:

There's a lot going on in this deck and I like to think of it as sort of a puzzle. Tons of pieces all working and interacting with one another in small, subtle ways. On its face, the deck is actually a control deck. You have spot removal, board wipes, and counter magic. You can get them back with Archaeomancer and Mnemonic Wall and, as mentioned previously, have things like reanimation spells to keep things going.

You may notice a few combos if you look. The infamous Time Sieve and Thopter Assembly combo is in here, but I prefer to play this only in emergency situations. Moments where I'm about to lose or else a game is going too long or has become drastically unfun. I'd much rather have fun playing a long game of Commander as opposed to a quick one where I win almost immediately. Personally, I like to think of myself as a fairly Spikey player. I play Magic quite competitively on the regular and so for me, the format is where I can cut loose and do some more ridiculous things for a change.

That's why the actual combos I use to win are actually quite a bit more durdly. The deck's core combo uses a very large number of cards, hence the bit about being a bit like a puzzle. My favorite way to do it is to use three cards to generate infinite mana and then create an absurd amount of copies of Archaeomancer with Rite of Replication. You generate this mass of mana by using these three cards together:

Khalni Gem is one of the only cards I've found over the years that generates multiple mana of the same color. Yes you could use Gilded Lotus too, but I've both been using this one for years and I like the utility that picking up lands can bring with it. You can get extra land drops this way, or else replay special lands like Bojuka Bog an additional time.

You then enchant your Aphetto Alchemist with Pemmin's Aura and can repeatedly use mana from Khalni Gem to net an extra mana every time. Eventually, you generate infinite Blue mana which then allows you to start generating mana of any other color you want. If you can't find any copies of Pemmin's Aura, as I know it can be tricky to find copies of sometimes, Freed from the Real works just fine. The reason I like Pemmin's Aura a bit more, though, is that once it sticks its landing, it allows you to protect the Aphetto Alchemist by giving it Shroud.

Now we can do all kinds of things. We can take every card our opponents control using Memnarch or repeatedly kick Rite of Replication on an Archaeomancer to create five copies and return five spells, including the Rite, back to our hand. By doing this repeatedly, we can create an infinite number of Archaeomancer tokens and repeatedly cast any instant or sorcery over and over again. We can go get Demonic Tutor and find whatever cards we want to end the game with. This could be the aforementioned Time Sieve combo or we could simply go for our Akroma's Memorial and give our infinite tokens haste.

The combo is convoluted and a bit janky but that's just the way I like it. It allows for long and enjoyably fun games with friends with lots of crazy plays that make for moments of shock or hilarity. This is one of the big reasons I love slipping a number of the fun group hug cards into the list. Cards like Howling Mine, Jace Beleren, and Font of Mythos not only help you further your game plan but also make your opponents less likely to go after you in the process.

Things get especially silly when the card Gate to the Aether is dropped onto the battlefield. It's a very "let's spin the wheel!" kind of card that very often creates some of the biggest moments of any game it shows up in. In a similar, less group hug-y vein, Urza, Lord High Artificer's Temporal Aperture ability can often generate a similar effect in games he appears in. In playing him, though, I've found players often tend to hate him out quite a bit more than the card I replaced for him - Grand Architect - thanks to how he runs away with games in various lists. Consider dialing it back with the Architect if that happens in your playgroup.

There's tons of other ways to play the deck as well. You can just control the board until you're able to beat them down with massive creatures like Sphinx of the Steel Wind and Darksteel Colossus (purposefully included over Blightsteel Colossus). You can even smack them around a bit with Serra Ascendant, in here to act as a deterrent, if they get a little too out of hand. If you're able to stick him long enough, Tezzeret, Agent of Bolas can even get you there. If all else fails, you can always go with the exceedingly cruel combo of Darksteel Forge, Mycosynth Lattice, and Nevinnyral's Disk to repeatedly blow up your opponents' entire board - including lands. Big bonus points if you also play Unwinding Clock alongside it.

So how does Emry fit into all of this? In truth, she's just another piece in a huge puzzle. I ended up swapping out a long-time staple of the list Darksteel Sentinel for her to make that puzzle a bit more consistent in the process. The goal is to get cards into the graveyard with ease, after all, and so with her cards like Entomb or else Liliana Vess' +1 ability targeting yourself are excellent ways to do so. While you probably want Sharuum for some of the larger pieces, you can absolutely use some cards easily thanks to the new Lady of the Lake. I may even look into some other cards to get additional use with her in this list, like the new Witching Well also from Throne of Eldraine.

It's honestly not very often I update this list with brand new cards, as after a solid decade of play I've continued to thoroughly enjoy where this deck is. It hits that sweet spot with being a strong yet not too competitive list I can bring to a more casual-oriented table. Good, fun, maybe somewhat long games with a bunch of friends - that's what Commander is all about to me! I hope you get to take this list, or a similar one, for a test drive at some point. It's an absolute joy to pilot and I'm dying to rock this amazing new merfolk in the 99.