There's been a lot of talk about whether the annual Commander precon decks and the made-for-Commander cards are good for the format. While it could be argued that the first year or two were pretty fine and added some interestingly fresh dynamics to the format, over time there have been worries over a growing homogeneity in Commander.

Cards like these have all been criticized because if you're playing Commander, you probably need several of these right from the get-go. That's not to say anything of color-specific cards like Chaos Warp, Dockside Extortionist, Teferi's Protection, Toxic Deluge, Song of the Dryads, and so on. Even legendary creatures themselves have been highly criticized, with cards like the following all having been condemned for being too good in their respective colors and/or theme:

This doesn't even include several other problematic cards that have absolutely been designed with Commander in mind in recent years. I'm talking cards like Smothering Tithe, The Great Henge, and Golos, Tireless Pilgrim. And don't even get me started on partners. After their initial appearance in Commander 2016 and how much they warped things, it's no surprise that the mechanic's return drew a lot of fear upon its return in Commander Legends.

To top it all off, there's the aspect of Competitive Commander - or cEDH - gaining more and more popularity, blurring the lines between casual and competitive when it comes to Magic's premier format. Power level discussions have run rampant and many people are frankly tired of it all. It's caused some talk about whether or not it's actually better to go back to how things used to be - playing with quirky legendary creatures and trying to build some off-the-wall theme. Or else play the true Commander way by pulling cards out of your binder and mashing them together into a pile hoping it works.

What if we went back in time to before all the craziness started in Commander? 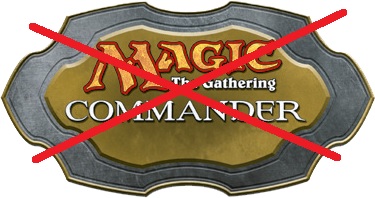 I'm talking about going all the way back to Commander 2011 and working with only the sets that came before it. In this case, that means New Phyrexia backwards, as Commander 2011 released prior to Magic 2012 or Innistrad. This avoids all the made-for-Commander stuff that's arguably been bogging down the format and pushing the idea of innovation. Some fun cards get lost in the process (like, let's be real here: Innistrad and Return to Ravnica blocks would've been just fine) but we make up for that with a chance to explore the truly casual origins of the format.

As it happens, I got back into the game largely thanks to Commander right around the release of Scars of Mirrodin and as such had quite a bit of experience with this sort of format. I used to spend days pouring over Magic Online on my days off searching for new and interesting cards and strategies to work with. It wasn't uncommon to see me build something like 8 decks, tear them down to make a Cube, and then take apart the Cube to make a ton of completely new decks unlike the ones before.

As it so happens, I was able to delve into the depths of my old online accounts where I used to house a bunch of my decklists I was working on and pulled out three old lists from this Classic Commander era! Let's dive in and take a look at some of them!

This is actually the earliest Commander deck of mine that I can still find on the internet in its original state. I'd had several listed on the original Commander forums, but with those dead and gone, it's become substantially harder to find any of those original lists. This was uploaded roughly nine years ago and was one of my first decks I ever played in my college days around the time of Scars of Mirrodin and Innistrad blocks.

It's clear that I was just getting back into the game and still scraping together something simple with what I could, as there's some card choices that would be bad even in a Commander precon today. Who would really ever think of running something like, say, Giant Growth or Plummet in a Commander deck? In truth, a lot of this list came from a mix of the Duels of the Planeswalkers elves precon, my love for classic Onslaught block elves, and some of the recent stuff in Zendikar and Worldwake at the time. And while there is some pretty good old fashioned Elvish nonsense going on here, there's so much more that could be going on. Put in a Quirion Ranger, an Essence Warden, a Birchlore Rangers, and a Heritage Druid, for Gaea's sake!

I'm sure some people are wondering why I haven't written about Elves Commander before when I obviously love it for 60-card Magic. The answer is that, really, this deck especially showed me that in Commander, a format where part of the appeal is every game being different, Elfball just kinda plays the same way every game. It gets kind of dull as a result. If nothing else, though, it serves as a pretty basic launching point for someone wanting a decently affordable deck to get started and build off of with a Classic Commander group. It's only $150 and some of the basic upgrades are quite cheap!

Let's take a look at something else a little more advanced now, something that was from around that same time frame but I spent a lot more time (and money) with:

Long-time readers of mine and people who follow me on Twitter might recognize this one. It's the Sharuum deck I wrote about back in September 2019, but a much earlier version of it! Much like the Ezuri list, this was also a list that I uploaded online back in 2011/2012 and was able to pull up in its original glory. It's not quite the original version, as that one featured more shenanigans fitting of the time with things like mana dork myrs, Myr Galvanizer, clone effects, Myr Propagator, and Golem Artisan as a combo finish. It was tremendously convoluted and a product of me trying to cobble a deck together from the parts I had.

As time went on, I streamlined it into something like this, slowly building it up one piece at a time. While it's not strictly a Classic Commander list due to a couple of newer cards slipping in, those cards are quite small. Command Tower can easily be swapped for another land and Spell Crumple can be replaced with a different counter spell. Even when it's been changed with newer cards, it still has so much of the core list on display here and continues to be a riot to play. You can even go a little further with it if you wanted and do mean things like slip in Disciple of the Vault as a way to get in an easy win by cycling Sharuum and Phyrexian Metamorph (or Sculpting Steel, which somehow isn't in this list).

Before I go into my next actual Classic Commander list, I wanted to revisit a list I wrote about last year:

Remember this? It's Zedruu, Target Painter! While you can check out that article for a more in-depth explanation of the deck itself, the basic premise of it was that you would set up big win conditions and give them to your opponents. Doing this causes chaos while you can sit behind a bunch of pillow fort effects to prevent your opponents going after you in retaliation. Or, you can always just take the simple way and use these conditions to win yourself.

In fact, it was that last concept of finding alternate wins that spawned the deck this came from. Zedruu obviously isn't okay for Classic Commander as it's got plenty of stuff from Commander 2011 onwards, but it actually spawned from a deck that was from that era. Check out Alternate Wins Brion Stoutarm!

Unlike the first two lists here, I couldn't find an original version of my Brion Stoutarm deck, so this one came about from deconstructing the Zedruu list and playing off the original concept as much as possible. That concept was going in on as many alternate win conditions as possible within reason. If I recall correctly, the reason I ended up in Boros colors with Brion is because the color combination to have the majority of alternate win-cons that were reasonably achievable. We're not as all-in on a single strategy like Mortal Combat or Epic Struggle that way.

Generally speaking, this looks a lot like the list I remember from my college days. A handful of cards definitely weren't there before, but everything here has some manner of way to make things happen. Despite having a pretty solid way to get life wins in thanks to Felidar Sovereign and Test of Endurance alongside our commander, Near-Death Experience is quite easy to achieve thanks to Phyrexian Processor. Simply put all of your life into it, wait a turn, and you're golden. You can even throw up a Worship to help ensure that you're able to stay in the game until your next turn comes around.

There's also a number of coin flip effects for Chance Encounter and a solid amount of proliferation-style abilities to speed up your Darksteel Reactor wins. One of the most unique cards here is Barren Glory - aka black border The Cheese Stands Alone. It's quite a far cry from the type of card you'd normally expect to see and is incredibly difficult to make work. Here there's basically one way: put it under an Oblivion Ring and then cast Apocalypse. My earlier versions were way more convoluted, involving Nevinyrral's Disk and cards like Armageddon or Devastation to get the job done. This is a much simpler and more elegant solution - if you can pull it off.

My favorite alternate win method, however, isn't really that alternate. In fact, it's quite Standard by winning through good old damage dealing, but it's so over the top that it feels like an alternate win-con. The strat here is to cast Soul Foundry, imprinting Serra Avatar underneath it. From there, you start creating copies of Serra Avatar every turn with massive life totals and then throw them at your opponent's face, taking out your opponents one by one. The best part is because Brion deals the damage, you effectively double your life total with every hit, thereby making further Avatar tosses even bigger!

If you're looking for a fresh way to play Commander and try your luck, this is definitely a great way to do it. It's not consistent at all and it really struggles with things like card advantage, but the times where you do actually get to pull off the epic wins are the games that become hallowed stories among your friends.

I may only have three decks for you all today, but don't worry, I'm only getting started with this Classic Commander nonsense. In a world where the traditional Commander format is getting crazier, more powerful, and far more homogenized than ever, it's good to take things back to the roots a little. I'll have more Classic Commander articles soon, but in the meantime, enjoy the lists, make Commander the way you want it to be, and have some fun with it however you play!