Hello everyone and welcome to another set review for the new upcoming release of Jumpstart! There's a lot of super sweet cards coming in thanks to the set, including excellent reprints, some new legendaries for Commander, and at least one sweet Legacy playable in the form of Allosaurus Shepherd. With these new themed packs came a small handful of cards that are new to the Pauper format.

In truth, I kind of wish I'd held off on doing my Core Set 2021 review until these cards were fully previewed. However, given that the set was stated to be aimed at beginners, I'm a bit impressed that we got anything at all - especially considering some of the cards we DID get! Because there's so few cards, I'll just go through and talk about each new card that's coming to Pauper. 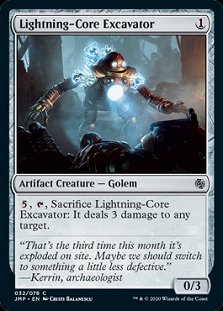 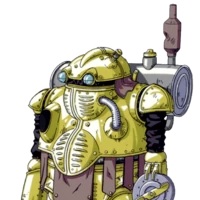 It's good to see my favorite Rick Astley-themed son get his own Magic card! As it turns out, similarities to a character from the greatest video game ever made aside, this card isn't all that spectacular. There's some possible fringe uses with recursion effects but we're talking so fringe it's hardly worth mentioning. It's too slow, too pricey, and fails the Bolt test spectacularly. Hard pass on this card. 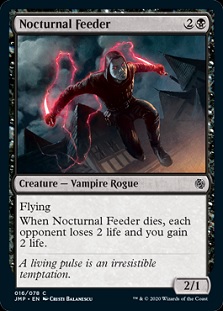 Nocturnal Feeder has some reasonable stats and doesn't really mind if it dies to a chump block from a faerie or a 1/1 bird. Problem is, 3 mana is still a tall ask for a card like this in the world of Pauper. While it might not see play in the sort of "Legacy Pauper" we're all used to, Historic Pauper events held on MTG Arena might like this quite a bit. 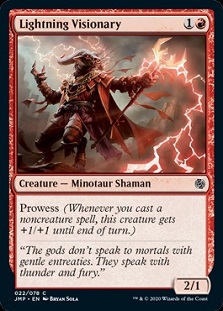 Lightning Visionary looked really cool at first glance until you look at all the creatures in Pauper with prowess. Very few of these cards have ever seen play and there are many with comparable stats. If this had haste or something, maybe we'd be talking, but as is it feels like a pretty easy pass. 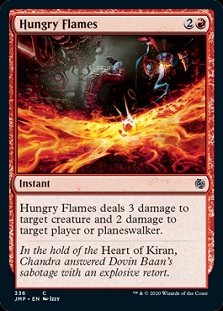 Who else forgot this card existed? Anyone? Just me? In case you didn't play a lot of Limited at the time (and to be frank plenty of people weren't enjoying it anyways) Hungry Flames was a cool uncommon from Aether Revolt. While a number of people seemed to enjoy Kaladesh limited, a lot of the response became much more mixed when Aether Revolt entered the mix, so you'd be forgiven if you forgot this one too.

That said, this marks one of two notable downshifts entering the Pauper format. This one is probably not that likely to see play given that we already have Searing Blaze. I'm sure there's going to be someone out there who wants an "always on" version of the effect rather than needing a land for maximum value. 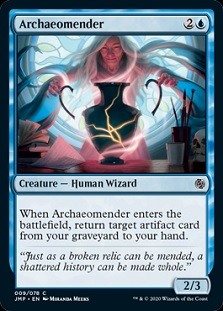 Archaeomender is clearly a reference to Archaeomancer and has a very similar effect, getting back an artifact as opposed to a spell. We haven't really seen this kind of effect in Blue before at common, with the only other card on a quick search turning up Reconstruction. In fact, from what I can see on said quick search, there are only about 10-15 commons that bring back artifacts from the graveyard at a glance. Very few of them see any play, and it's usually fringe at best.

I've seen Fortuitous Find a handful of times in One Land Spy as a way to really put your combo together and I know I've seen Sanctum Gargoyle a time or two in the past. But that was the past and this is now. We have a more or less functional version of this card in White in the form of Trusty Packbeast and I can't say that card's ever made waves. What's more is that a lot of the actual artifact decks care about White and don't want this, so I wouldn't bank on Archaeomender seeing all that much play. It is a cool card, however, so who knows. Maybe someone will brew up something fresh that breaks it.

The Thriving lands are a huge win to Pauper. Pauper has desperately struggled with mana fixing for its entire lifespan, barring of course the brief period where the fixing was too good thanks to Arcum's Astrolabe. These five lands feel like a great mid-point for a lot of players trying to play more than two color decks. Ash Barrens was a tremendous help there as it let players get their land untapped, but this might shake things up a little bit by giving players better access to the colors they need.

Admittedly, these aren't as great as I'm sure some people might like. After all, they're glorified guildgates a lot of the time, so your average deck won't want them. Hell, realistically, most decks don't even want the Khans tap lands if they can help it. What makes these lands good is the versatility they offer. Even for decks that don't necessarily want many tap lands it might be highly beneficial running a few of these in decks that utilize some off-color splashes.

I'm thinking Bogles and Slivers specifically here, as both run a number of non-Selesnya cards post-board. Tron is probably the big winner, though, since now you can make the handful of taplands in your deck tap for whatever you might need in a five-color list. The loss of life gain probably hurts too, though, so it'll come down largely to preference here. The other big winner is the brewers, who will probably make a couple fresh decks work in some capacity thanks to these lands, but we won't see the results of those efforts for a while. 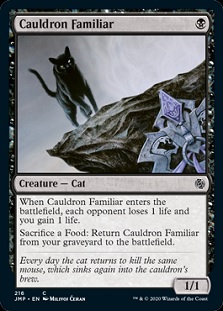 All right, now here's the real spice: Cauldron Familiar is being downshifted in Jumpstart. That's right, the terror of Standard is here, but it's missing a very big friend in Witch's Oven. Without this card, you'd think there's no shenanigans that can be pulled off with this card, right? Ah, but you're not thinking big enough! Check out these two cards:

If you have TortEx down you can cycle through multiple copies of Bartered Cow in order to continually bring back the cat. We have to get a little more creative and add a sac outlet now. Carrion Feeder and/or Viscera Seer work pretty nicely. What if I told you, though, that using Ashnod's Altar and either Prismite or Signpost Scarecrow can give you infinite Cauldron Familiar cycles to kill your opponent?

Here's how it works:

This might sound like a lot, but if you've ever seen Tortured Existence decks play out, it actually might be a reasonable line of play. TortEx decks have a huge tendency to sit around and durdle a ton, bringing the game to a crawl. It's so slow, in fact, that many players time out with the deck on Magic Online, which has caused it to have little to no presence on the platform. As such, a build with some of the key cards in low numbers might make this a reasonable strategy and a fresh line of attack for TortEx players.

There is a small problem that a lot of times TortEx likes to use things like the dredge mechanic or cards like Commune with the Gods to fill the graveyard. As a result, there's likely to be concerns about pitching some key pieces of the above away. You don't want to accidentally bin a Tortured Existence or Ashnod's Altar, right? Well, the answer might just be in the last new Pauper card from Jumpstart: 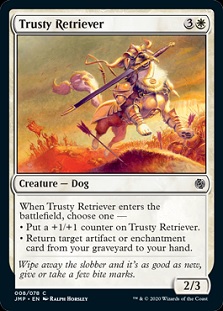 Wizards just had to give us some great puppers with Core Set 2021's big change from hounds to dogs and this is a great one. Trusty Retriever gives us a lot of reach and allows White to get back artifacts and enchantments as opposed to just one or the other like usual. Custodi Squire notably championed this ability before, as well as being able to get back creatures.

While that one might still be stronger due to better flexibility and stats, it does cost 5 mana to Trusty Retriever's four. If you run it in the aforementioned TortEx combo deck, you can bring back key pieces out of your graveyard with ease, allowing you to pave your way to victory.

Even beyond that style of deck, it just feels like an excellent card in general. While the hype Custodi Squire originally had has died down, this fills a number of the same roles in many decks and can be turned into a more aggressive creature if you feel the need to. I imagine this can fill a number of roles and may surprise you where it shows up here and there. Just don't overestimate it, because that mana cost is real in the context of Pauper.

In closing, most of these cards won't do too much for Pauper and it's a bit of a shame that Jumpstart didn't have more to offer us. However, the set was clearly meant for new players and, in all honesty, I'm impressed we even got some of the cards we did - namely the downshifts. Despite that, there's still some great tools and toys here for players to enjoy alongside all the new goodies in Core Set 2021. Now it's time to buckle down and wait to see what kind of insanity Double Masters brings to the table in a couple months!