I'm back with another Modern tournament report where I fall slightly short of making the elimination rounds with a recent move of SCG cutting to top 4 for team events. Raja Sulaiman, Stephen Dykman, and I finished in seventh place at SCG Columbus. It was good for $300 and two promo Cryptic Commands each. I'm still counting this as an SCG Tour top 8 and you can't stop me. 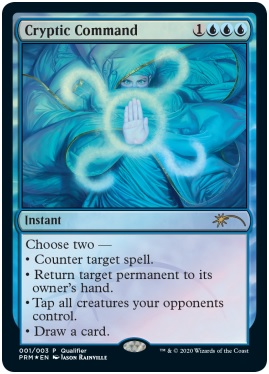 I don't like foils, but this is pretty sweet.

Here's what my team played:

Stephen is a a Death & Taxes player who recently made the Top 8 of the SCG Invitational piloting Urza, Lord High Artificer. His claim to fame is being roommates with Kat Light and Brandon Dollaway.

He was gifted a shirt by carmate, James Johnston, of Goku eating. 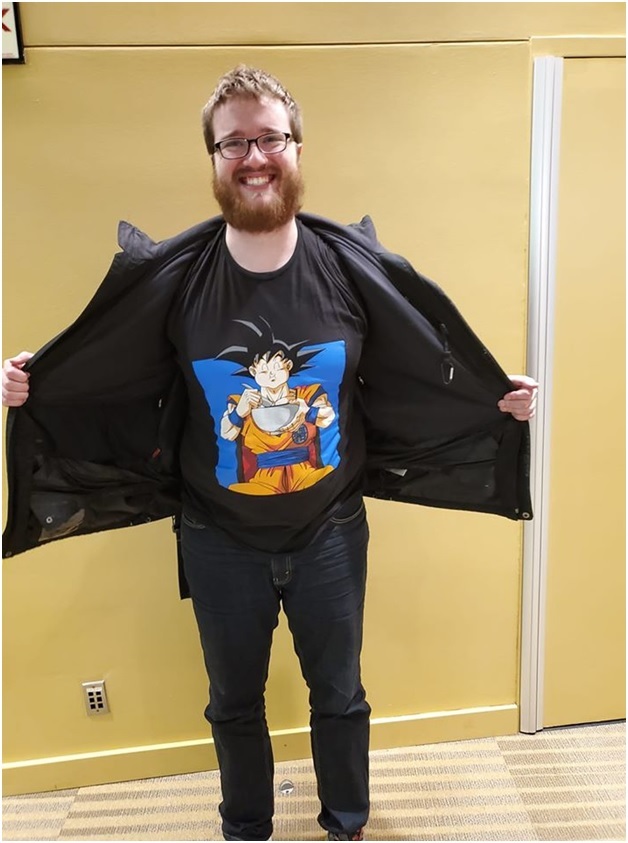 This turned out to be fitting as he consumed about 3,000 calories during our Friday dinner: a breaded cheese appetizer, a personal pizza, and dessert. The Sunday dinner featured ice cream, then chicken tendies and fries, followed by more ice cream. Stephen came to game this weekend, but also to eat.

Raja and I were concerned Stephen may take too many draws with Urza so we thought hard about the right deck for him. D&T wasn't very well positioned in Modern, but Phyrexian Revoker was great at stopping Oko.

Stephen talked to Raja and I about trying Phyrexian Revoker in Eldrazi Tron, which seemed like a great idea. We were even more excited about this new addition because it meant we could find an early creature to replace Matter Reshaper.

The biggest uncertainty was if this theorycrafted deck could actually come together a week before the tournament. Cutting an established creature in Matter Reshaper may have unintended consequences we wouldn't see until Stephen is getting crushed in the main event. Luckily that wasn't the case. He only lost once all weekend.

Initial leagues leading up to SCG Columbus proved fruitful for Stephen. The deck addressed our concerns with his deliberate play style while also leaning into his strengths as a D&T aficionado.

I did some digging on historical Eldrazi Tron decks and I saw less than a handful not playing Matter Reshaper. This is surprising since many Modern experts cast the deck aside because Reshaper isn't impactful enough in such a powerful format. It's good against grindy decks like Jund, but they were largely pushed out by Oko.

A single Endbringer is played about half of the time. It used to be more popular, but Oko makes it an overpriced Elk. If you're packing four Phyrexian Revoker the downside is mitigated. I would stick with one moving forward.

Devoted Devastation had been picking up in popularity due to its strong matchup against Urza and Primeval Titan. It also happens to be a bad matchup for Eldrdazi Tron, but Revoker on Devoted Druid or Oko makes things even. It's unclear if this is a concern in the post-Oko metagame.

The second Cavern of Souls as a flex land was great as Urza decks were full of counterspells. Moving forward it will be less powerful as artifact decks are likely to transition back to Whurza.

I wouldn't play less than two Ghost Quarter with the amount of Primeval Titans in the format. There are plenty of cute lands to play, but it's best to keep it simple.

Mind Stone is the second piece of technology in Stephen's list. It's a way to get a third turn Karn. This play pattern is better without Matter Reshaper because you would want to cast both spells early. No Matter Reshaper means Mind Stone comes down first every time.

We had a feature match against Ross Merriam, Eli Kassis, and Shaheen Soorani where Mind Stone shined. Their team all played Urza with a Red splash for Galvanic Blast, Experimental Frenzy, and Blood Moon in the sideboard. A Mind Stone ensured we had the colorless mana required to cast Eldrazi through Blood Moon in the final game.

Mycosynth Lattice being banned certainly puts a damper on the archetype, but I wouldn't count it out just yet. Karn, the Great Creator is still a powerful threat as the Eldrazi fall off quickly after Thought-Knot Seer and Reality Smasher. Karn's static ability is good against Thopter Foundry, too.

Matter Reshaper is likely back in the deck with Oko banned because decks like Jund and Death's Shadow have more room to maneuver. The lesson I'm taking away from this deck is not to be afraid to deviate from the norm. Modern has been going through many phases in which the best deck pushes many strategies out of the format completely. This provides opportunity to get paid off making a unique move.

A member of R.I.W. Hobbies I have known for over a decade. He is best known for teaching Zach Allen how to play Magic well and enjoying raw onions on Macaroni and Cheese. 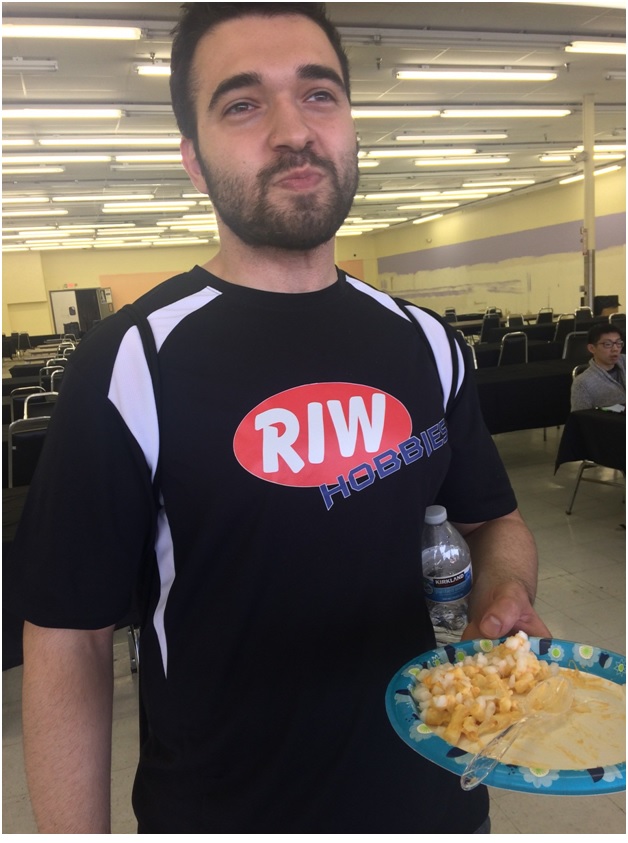 Just because I teamed with him doesn't mean I agree with his politics.

Raja and I both played Devoted Devastation. He finished 8-0 at the SCG Invitational with the deck so I felt confident going into Columbus with a strong pilot.

Our lists were pretty similar; here's what I registered:

Raja and I took turns having good and bad days in the event. I began by finishing 6-2-1 day one followed by 1-4 day two. The first day I only lost to the mirror twice which was interesting; I never played the mirror before. Most games end quickly, but Oko also is capable of warping the game state.

I mainly fought big mana decks and Urza outside of my two mirror losses. The eighth round feature match against Ross Merriam luckily went in my favor. Red Urza was defeated, but it felt miserable on my side. Raja and I went 1-3 against Red Urza on the weekend.

The Red Urza version is the most difficult matchup for Devoted Devastation because they added another angle of attack in the sideboard - Anger of the Gods. This is evaded by Veil of Summer and difficult to counter with Mystical Dispute. Raja and I were boarding in Burrenton Forge-Tender, but that only gets so far in the face of Oko turning it into an Elk. It's also hit by Engineered Explosives for one.

Red Prowess was another one of my losses on day two. It was my second time losing to it in a couple weeks. Game 1 is bad and I need to play around Kozilek's Return in both post board games. If their draws are mediocre in games 2 and 3 I can win. I lost to Ray Perez in the Top 8 of an IQ a couple weeks ago and Jameson Perdue at the Open. They both play Firebolt over Burst Lightning which makes things worse.

Devoted Devastation is likely in a bad spot in the coming weeks. Jund and Shadow returning as midrange contenders as well as Mono-Red Prowess not having anything banned are big headwinds. I'll likely table Devoted Devastation for the foreseeable future and play it again when the top deck skimps on spot removal.

Since Oko, Mox Opal, and Mycosynth Lattice are banned we have a slightly powered down Modern format. Here's what I plan to play in the short run:

I expect Tron to still be out in force which makes Field of Ruin a good choice for a third color. Karn, the Great Creator can still invalidate Batterskull by animating it, but at least he won't lock me out anymore.

Burn and Prowess will have a good couple of weeks before the metagame begins to solidify once again. A quick Batterskull backed by removal and Timely Reinforcements was enough to compete historically.

Jund and Death's Shadow were good matchups in the past. I have a couple Celestial Purge in the board to make sure I'm ready.

Mox Opal allowed Urza decks to go from cheap to expensive spells which put Spell Snare in a bad spot in the metagame. Since early drafts of Urza feature four copies of Thopter Foundry I can once again confidently play Snare. There will also be Blue midrange decks with Snapcaster Mage. Imagine Snappy actually being strong enough for Modern again!

A single Mana Leak is combined with two Mystical Dispute in the sideboard. I don't want to play too many leak effects because I want them all in for the same matchups. Dispute wasn't yet ubiquitous when I played Stoneblade last time.

Joe Bernal was one of the few Azorius mages playing Isolate, but I think it's in a great spot. I like it in the following matchups:

Humans: Aether Vial, Noble Hierarch, and Champion of the Parish

It's a cheap instant to board in that can be flashed back with Snapcaster Mage. What's not to like?

Dredge could try and take the new format by surprise. I intend to be prepared with Rest in Peace and Ashiok, Dream Render. The RIPS are also good against Jund and Whurza. Ashiok can be a good answer to early iterations of Primeval Titan decks. I expect Ramp gets a boost from Uro, Titan of Nature's Wrath.

Before Oko came on the scene many players were coming to the conclusion that numerous Jaces wasn't where you wanted to be. I was very impressed with Cryptic Command as the curve-topper due to the synergy with Mystic Sanctuary.

I added a seventh fetch land over the Glacial Fortress I used to play because it's awkward with Field of Ruin, Celestial Colonnade, and Mystic Sanctuary.

Modern has a breath of new life and I couldn't be more excited. I get to play some of my favorite creatures of all time in Blue/White Stoneblade so things are looking up. Oko, you will not be missed.