As the world continues to be on lockdown I have been having fun playing Arena. When I wrote my first article about Arena I wasn't sure if it would hold my interest. As I have been now grinding for over a month I can say it hasn't lost its luster.

My last article on Arena came out just before Ikoria was released. My plan was to do a ton of drafts and build up wildcards for emerging Standard decks, which was a smashing success.

Ikoria was able to be drafted against humans which removed the pesky aspect of manipulating bot picks. This means taking clearly powerful cards undervalued by bots. It was strange at first to draft against humans, but I got the hang of it again. This is something I never thought I would say. What is the future?

Since I began at a lower rank, the players at the draft pod were making questionable picks. I could basically pick my deck every time.

deck. We ran the tables on the Best of One draft. 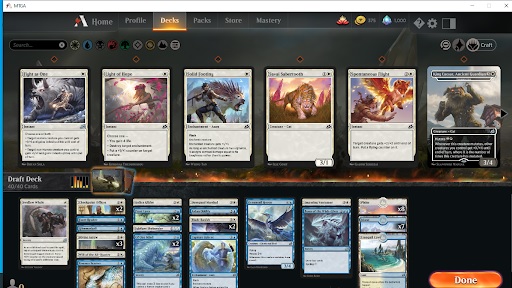 Checkpoint Officer and Facet Reader were early plays that scaled into the late game. They were humans which worked with Of One Mind, but I still sometimes forget they cannot mutate.

The 3-drops are mostly non-human which is an excellent pair with the 2-drop humans.

This particular build featured Frost Lynx, but I now prefer Thieving Otter because of mutate granting flying via Dreamtail Heron and Vulpikeet.

The high drop creatures I prefer are Imposing Vantasaur and Wingfold Pteron. I default to giving the Pteron hexproof because the mutate creatures can give flying to close out the game quickly. I cycle the Vantasaur early because I have plenty of mana sinks. A 3/6 Vigilance is powerful in this format, too.

Boon of the Wish-Giver is a bomb in removal-heavy decks. I haven't been impressed with it in decks that care about board presence.

, for example, would prefer something like Honey Mammoth at the top of the curve instead.

's best aspect is removal. Divine Arrow and Essence Scatter are cheap ways to interact that scale into the late game. I will play up to three arrows and two scatters. If Blue is the most open color my deck will have a lot of instant-speed interaction. I have actually liked Adaptive Shimmerer quite a bit in these decks. There's nothing like a mutated shimmerer; it closes quickly.

The 4-drop removal is Blade Banish and Capture Sphere. Since the Sphere is less restrictive, I strongly prefer it. As the drafters get better I'm seeing less spheres so I need to resort to additional Blade Banishes. It's still a great card, but falls short against Humans. I don't like to play more than four of these effects combined. I won't play more than two Blade Banishes either. This slot helps shore up your matchup against Green mutate decks.

Swallow Whole was great in this particular version of the deck, but it depends on how many Checkpoint Officers you have. Green has plenty of ways to buy back creatures which makes exiling a giant mutated monster appealing.

Pacifism is the cream of the crop. It's crazy how much removal White has to offer in this set. There aren't many ways to interact with enchantments. When Gemrazer mutates you will have a bad time, but that's a rare. Blue doesn't have a good way to bounce which makes Pacifism better than normal.

I have found it important to be aggressive despite packing so much removal. This draft format is defined by rares. The slower the deck the more time my opponent can find their bombs. What this means is picking mutate creatures over redundant copies of the second-tier removal. It could also mean just filling out your curve so you don't have to waste removal on every creature.

Here are some filler creatures that have impressed me:

Daysquad Marshal - Just a good rate. I have to be picky when it comes to 4-drops to make room for Capture Sphere and Blade Banishing.

Helica Glider - A first strike creature lines up well against Humans. Flying helps against Green to close the game.

The small creatures with cycling such as Drannith Healer and Valiant Rescuer are medium in this style of deck. They cannot be mutated and the body doesn't scale into the late game. The Serval is strongly preferred. Imposing Vantasaur is the optimal cycler in this deck. Since I rarely cycle, Snare Tactician doesn't make the cut.

White has plenty of combat tricks. I typically find room for a single trick because there's so much removal to play.

Spontaneous Flight - A great combo with Thieving Otter. I like this the most.

Solid Footing- A great combo with Maned Serval and can even get the Otter through for multiple turns. I'm not sad to play this, but I typically find a flight.

Fight as One- It has high upside, but was less impressive than the other two discussed.

Light of Hope- I don't play this as I prefer Solid Footing and both go around late.

Will of the Hunter- I liked this trick at first, but it's kinda difficult to set up. The opponent will already be afraid of Divine Arrow. This set is also packed to the brim with removal so you are opening up yourself for a blowout with a defensive trick.

I was able to build up enough wildcards by drafting

didn't work for me because Red creatures weren't defensive enough.

Green paired better with Blue and Black. I strongly preferred to pair Green with Black because Boot Nipper was so strong with Ram Through. Green is in a weird space where it has Humble Naturalist and Essence Symbiote and not much else to play early. Deathtouch makes Ram Through another early play.

decks I liked, but they mainly involved powerful Simic gold cards such as Parcelbeast and Primal Empathy. It's strange to have such good card advantage engines at uncommon. Overall this archetype underperformed for me, but others reported good results.

Each time I won five out of seven games before losing three I would get my entry back plus four packs. That worked well for me for about two weeks. I was able to get up to Mythic ranking.

Now that I had forty rare wildcards and twenty mythic I could put together a few decks.

I was interested in Best of Three matches so I filled out the sideboard, too. My results in BO1 matches weren't inspiring because this particular build was weaker to aggressive decks. There wasn't much I could do against a fast start as I sat there with countermagic and a game plan that would take about seven cards to get off the ground.

I tried to make it look more like Temur Flash with Reclamation so I had more early interaction. Nightpack Ambusher was another way to control the ground that worked well. If I interacted with creatures each turn Uro would eventually stabilize.

Nothing says "welcome to Constructed" like figuring out how to cast a large Explosion before Arena passes the turn for you. This deck requires some serious reps to play on Arena. I'm interested in getting a feel for many decks so I quickly built something more forgiving- Jeskai Fires.

This deck was much easier to play, but Standard is very complicated given all of the static effects. Companions also took some getting used to. It's weird to make mulligan decisions by looking at the top of the screen for a clue at what I'm playing against.

I put together Jeskai Fires because most Standard decks don't play a lot of mythics. The rare wildcards seem to be my bottleneck because of the mana bases. Since most of the unique cards to the deck are mythic, such as Kenrith and Cavalier, the investment wasn't as high. The lands ate most of my rare wildcards, but it had a lot of overlap with other decks.

I used one of my flex slots on a Brazen Borrower because I expected more aggressive decks. It's also a creature that can be given haste to apply pressure. Overall I have been happy with a single copy.

Elspeth Conquers Death has been great because I feel weak to Yorion. There are plenty of different versions of three-color value decks and ECD lines up well against just about all of them. Most low to the ground decks play Lurrus of the Dream Den so I'll have a target most of the time.

I wasn't sure if I would like Time Wipe, but it keeps coming up in clutch situations. Bouncing the Keruga has happened on more than one occasion.

Overall I'm happy with Jeskai Fires, but the current popularity of Yorion makes me think I should table it for now. Their companion is much better at going over the top.

Since I have the Jeskai mana base I was able to give the cycling deck a try that made the top 8 of a recent Arena Grand Prix:

This type of deck isn't my jam, but I was only missing uncommons and I wanted to give it a try.

The games you have a turn one Flourishing Fox are so powerful that it could stay a contender in Standard. It's scary when you have to spend your early turns defending against creatures only to be burned out from ten life thanks to Zenith Flare. Since the way to win the game is so different from the early pressure it's quite dynamic.

Overall I was happy with this deck. It has some play to it despite looking very basic on the surface. At this point the opponent knows they need to watch out for Zenith Flare after turn four which hurts its win percentage.

I'm saving the best for last. The deck I have been having the most success with currently is good ole Mono-Red.

I was afraid of Mono-Red underperforming in Best of Three, but it has exceeded expectations. When Mono-Red was initially pushed out of the format it was because

Control had Aether Gust and Devout Decree to win post board games.

Since I had a glut of mythic wildcards I pulled the trigger on crafting three Robber of the Rich. I finished off the deck by completing the set of Castle Embereth. The deck was treating me well in BO3 and I use it often to complete daily quests.

The current Standard features Jeskai Fires and Temur Reclamation pushing down the Cat/Oven decks that oppressed Mono-Red. Yourion, the current top dog, feels like a great matchup. Since their deck is eighty cards they can only hate you out so much with Aether Gust and Devout Decree.

The problematic matchup so far feels like Temur Reclamation. Game 1 is favorable as they move away from sweepers, but Uro and a pile of removal is tough to beat after board. It's hard to turtle up too much because they still go over the top quickly with Reclamation and Explosion.

That's all I have today. If you aren't on Arena yet give it a try. I'll never have to go outside again.