Hey there! This week, I will take my first look at Magic 2014 spoilers, so if you donât want to be spoiled, navigate away now! For those of you who are interested in what new cards we have in store for us this summer, I will mainly be taking a look at cards that will be making an impact on Standard. I will take a look at the set for Limited once we have the full card list in about a week or so. In this article, I will be discussing the following spoiled cards from M14: Shadowborn Demon, Xathrid Necromancer, Elvish Mystic, Scavenging Ooze, and Ogre Battledriver.

As of writing, there were a hundred eighty-four out of two hundred forty-nine cards in the M14 spoiler, including the basic lands. All but two mythics have been spoiled, so there is not all that much possible awesomeness on that front. Overall, I would say I am a bit disappointed with the set, as there are not very many cards that instantly pop out as Constructed playables. There are, however, some potential role-players and solid cards that are worth looking at. I wonât be discussing Chandra, Pyromaster right now because I think many writers will be writing lengthy articles about her this week, but Iâll try to return to her later on when I take another look at the set. 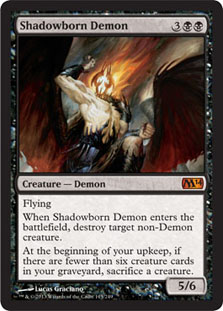 This was among the first cards to be spoiled for the new set, and I would say it has a lot of potential in certain decks. First of all, getting a 5/6 flyer for 5 mana is already a good deal, and once you add the removal effect, it becomes great. As I see it, there are two separate ways of tackling the drawback that this big flyer has. The first is to play a lot of small creatures and not even aim to have six creatures in the graveyard, but instead focus on smashing face. The other strategy is to put the creatures in the graveyard and then play this Demon.

For the first strategy, I think something like the Zombie shell would work very well. You donât mind sacrificing Gravecrawler, and you also have a lot of other fodder for the Demon. You could even play white for Lingering Souls to have even more stuff to eat. The real question here is whether there are better 5-drops than Shadowborn Demon. If you are playing black and white, you already have access to Obzedat, Ghost Council and Blood Baron of Vizkopa, and if you are playing red, you are able to play Falkenrath Aristocrat and Thundermaw Hellkite. These cards all offer their own advantages, but I do like the fact that you can get rid of annoying creatures while deploying your heavy hitter.

For the other strategy, Junk Reanimator seems to be the perfect fit. You are already putting a lot of creatures in your graveyard, and having access to a targeted creature removal would be very welcome. If you donât have enough creatures in your graveyard, you can always sacrifice some mana creatures or Lingering Souls tokens you have lying around. Not to mention that Shadowborn Demon become very good when combined with Restoration Angel; plus, itâs just a quick clock on its own. I wouldnât be surprised to see Shadowborn Demon as at least a two-of in most Junk Reanimator lists. 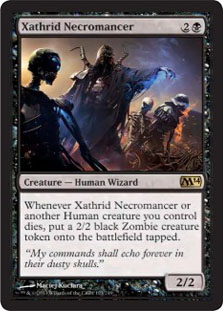 This Gray Ogre might not look all that menacing, but in the right deck, Iâm sure it will wreck some real havoc. Just adding this to an existing W/B/R The Aristocrats version does wonders against sweepers that arenât Terminus. Since you already have access to multiple sacrifice outlets, generating value from your smaller Humansâsuch as Doomed Travelerâseems really easy to accomplish. Combine this with Blood Artist, and you have a very scary and quick clock. This card is yet another reason that Pillar of Flame will continue to see play in the format. 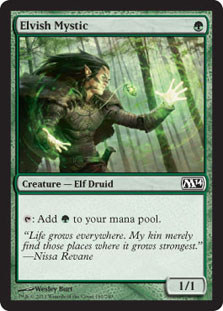 A new version of Llanowar Elves might not be the most exciting thing in the world, but it does mean that we again have access to twelve 1-mana accelerants in Standard (not counting Deathrite Shaman), meaning something like Elves might be playable again. While the deck suffers a lot against sweepers, it can be quite explosive, powering out early Craterhoof Behemoths and the like. There is only one other Elf spoiled in M14 so far, so the small green guys might end up a bit lonely unless there are some other pointy-eared creatures yet to be spoiled. Some other green-based deck might also arise that takes advantage of the fact that you can play Arbor Elf and Elvish Mystic as early accelerantsâif you donât need the white mana Avacyn's Pilgrim gives you. 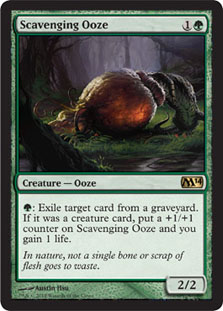 And speaking of green creatures, this Legacy staple is making its first graveyard-hating appearance in Standard. I like this reprint both because the card is extremely fair and in no way overpoweredâunlike some other Legacy-only cardsâand because it will make this card much cheaper to acquire than it currently is. It works extremely well against dedicated graveyard decks such as Junk Reanimator, but it also has its uses against decks with lighter graveyard interactions, such as decks with Snapcaster Mage. The life-gain can also be very relevant when playing against the more aggressive decks; plus, it serves as a good follow-up after sweepers.

I would say Scavenging Ooze is among the most flexible cards in Standard, and for that reason alone, it will see play. It does require a fair amount of green mana to operate properly, so decks such as the current Gruul aggro canât really play Scavenging Ooze, but the more green-heavy decks such as Naya midrange and others can surely find uses for this. 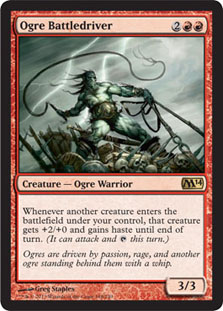 Ah yes, good red 4-drops, we definitely donât have too few of those. While this is not as aggressive on its own as Exava, Rakdos Blood Witch or Hellrider, it can cause some serious blowouts. The effect resembles Fires of Yavimaya a lot, which is fun because it was the deck I played when I first started playing in Magic tournaments some twelve years ago. While much has changed since then, giving haste to your team is always something to take notice of.

For me, this card just screams, âTokens,â and curving this into Lingering Souls with flashback is very scary. In that scenario, Ogre Battledriver has a lot of similarities with Master Biomancer, but if you want to play it with Lingering Souls, it only requires three colors as opposed to four. Back when Gatecrash was released, we really tried to get a Master Biomancer deck to work, and perhaps itâs now possible to do it with Ogre Battledriver instead. Increasing Devotion is still legal in Standard for a while, so we might yet see some hasty token beatdowns happening. I know I at least will try to make this a reality.

That was it for the spoiler watch this week. Next week, Iâll be looking some more at what Magic 2014 has to offer us in regards of Limited play. I hope to have some good tips on Sealed as well as Draft to help you at your local prereleases. The World Magic Cup is coming up soon, and as Standard is a major part of the event, I will do a lot of Standard testing the coming month. Unfortunately, I wonât be able to write all that much about it, as we prefer to keep our testing a secret when the format is new.

You can find my music on: http://soundcloud.com/bloomlive