Hello, everyone, and welcome to my first DKA ISD ISD Draft walkthrough! This was a Magic Online 8â4 queue.

I could have taken Griptide to stay on color, but Tragic Slip is a very good removal spell and worth dipping into a second color for.

Seeing Increasing Confusion, Griptide, and Bone to Ash was a strong signal that blue was open. Being passed the third Wrack with Madness meant that red was open as well. Increasing Confusion could win games on its own, and I didnât necessarily need to adapt to a mill strategy to play it, so I took that.

From the looks of this pack, red was definitely open; however, Wolfhunter's Quiver was an excellent pick and kept my options open.

This pick really wasnât close. It wasnât worth it to move into another color here, so I took the only good blue card.

I strongly considered picking Markov Warlord here, but I chose to stay on color and just take the artifact.

Warden of the Wall

Again here, it wasnât worth it to move into another color. The problem was that black was being completely cut off from me, but it looked like red and white were both open. I was going to have to choose what my second color was going to be soon.

In this pack, I finally chose my second color. Iâm a big fan of U/R aggro/tempo, and the Hinterland Hermit provided me with a 2-drop that this type of deck needed.

I was astonished that Evolving Wilds was still in the pack. It usually goes as late as fifth pick, but Iâve never seen it this late. The Alpha Brawl was really slow but on color, so I considered that, but I knew I was going to be splashing Tragic Slip, so the Evolving Wilds was better here.

At this point, it looked as though I was U/R, so Faithless Looting was a great card for me to pick up.

I wasnât very happy with this pack. My only option was Galvanic Juggernaut, which is fine, but my deck was looking a bit on the slow side. I needed to draft a lot of 2- and 3-drop creatures from here on out.

Skirsdag Cultist was looking like the pick, but I didnât want another 4-drop. My red at that point was Faithless Looting, Hinterland Hermit, and Nearheath Stalker, all of which are pretty weak. I chose the Angel because I could splash it or switch to white if the cards came.

It looked as though blue was being cut off but that white was open. Geistcatcher's Rig is better than Doomed Traveler, and it was removal, so I just went with that.

Again, blue was nowhere to be seen. Chapel Geist is awesome, so I was happy about grabbing that.

My plan to switch into white was paying off so far.

I thought long and hard about switching back to red for that Geistflame, but I was pretty happy about taking the Silent Departure.

Selfless Cathar was on color, but I wouldnât be happy about playing it.

There were absolutely no good blue or white cards in this pack. I wouldnât take Abbey Griffin because at that point, I had plenty of 4-drops already, and Abbey Griffin is very mediocre. Dead Weight was good removal, and I was already splashing black, so I went with that.

Moon Heron was a good flyer for my deck and a Spirit that worked with Angel of Flight Alabaster. Another 4-drop seemed awful, but it was a better pick than Village Bell-Ringer.

I wasnât too excited to see Elder of Laurels, but what could I do? Selhoff Occultist was the much needed creature for my deck that cost less than 4 mana.

My choices here were a second Moon Heron or Falkenrath Noble. Noble was in my splash color but is an excellent card that could swing games in my favor. My deck really needed this guy.

I could have taken Smite the Monstrous, but with my three-card splash, Shimmering Grotto was a no-brainer.

My choices were Blazing Torch and Grasp of Phantoms. Griptide-like effects are really good, so although I could have used the cheap removal, I felt that a third Griptide was better.

Curse of the Pierced Heart

Hereâs the deck I played: 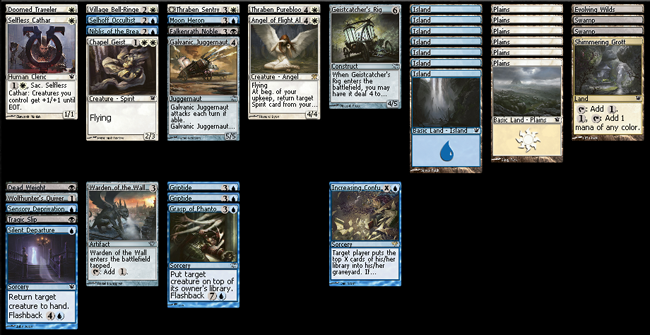 Overall, I wasnât extremely happy with the deck, but I knew that I had enough removal to make it work.

Game 1, my opponent played a lot of random 2/2s, including Stromkirk Captain, Heckling Fiends, and Gravecrawler. My Warden of the Wall kept his creatures from ever attacking while I beat him down with flyers.

Game 2 went much differently. I had a slow start, and he began with Hanweir Watchkeep, which he transformed the next turn, and then dropped a Galvanic Juggernaut on turn four. By the time I stabilized, I was at 5 life, and a Bump in the Night with flashback finished me off.

Game 3 was very much like Game 1. I drew a solid curve of flyers and a few Griptides, and my opponent could never keep up with my flyers.

My opponent began with a turn-two Shriekgeist on the play, which milled me for four cards by the time I was able to deal with it. My opponent had a few Dream Twists but was stuck on lands, so I was able to overwhelm him quickly.

A problem I found when drafting the mill deck is that all of the spells are cheap, such as Dream Twist, Thought Scour, and Curse of the Bloody Tome. Therefore, the mill deck could play as few as fifteen lands. I donât know if this was true of my opponent, but he missed multiple land drops in our game.

Game 2 was more of the same: mill effects and not enough removal for my creatures.

I mulliganed to six on the draw while my opponent mulliganed to five. I kept a two-lander with plenty of 3-drops, but I missed my third land drop for two turns. In the meantime, my opponent had a sick curve of Avacyn's Pilgrim, Villagers of Estwald, Darkthicket Wolf, and Orchard Spirit, and I died very quickly.

Game 2, we both mulliganed again, but my opponentâs hand was not as good as it was in Game 1. I had a curve of Wolfhunter's Quiver, Dead Weight, Chapel Geist, Moon Heron, and Angel of Flight Alabaster, which was too much for my opponent to deal with.

Game 3, I had a Wolfhunter's Quiver and a Village Bell-Ringer, and my opponent started the game with Doomed Traveler, Avacyn's Pilgrim, and Niblis of the Mist. I knew that once I hit my fifth land drop and was able to equip the Quiver, I would make short work of my opponentâs creatures.

However, the turn before I was able to equip it, my opponent played and flashed back Travel Preparations, making it so my Quiver did nothing. I was being beaten down fast, but I stabilized at 2 life. A timely Divine Reckoning from my opponent put the game out of reach for me, and I lost.

I was overall happy to make it to the finals with a deck that I felt was weak. I hope I can win the next one! As always, thanks for reading and be sure to follow me on Twitter @AllWeDoIsWinMTG!