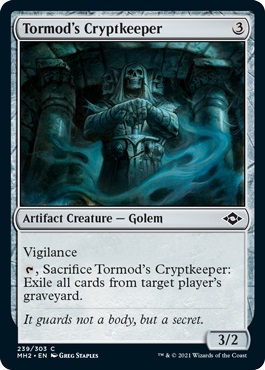 Is this an interesting one? Is it a keeper?

Let's start by looking at it from a power and toughness standpoint... 3/2 for three mana - three colorless mana, mind you - is nothing to write home about in 2021. But it's also not bad. Necessarily. We play some but not very many cards that are basically a 3/x (usually a 3/3) for three mana. Gnarled Mass wasn't really good enough for Standard even when it was performing in Block, but creatures with additional abilities or options can be:

... But we certainly play some 3/3 for three mana creatures. Kazandu Mammoth is one of the best examples. It has a serviceable combat ability, but I don't think that would get it played almost anywhere if not for the incredibly flexible role as a land.

Here is another one that flits past playability kind of near popularity... Important to note, Radha, Heart of Keld has a built-in card advantage and selection engine; not to mention the ability to win the game all by her lonesome if left unopposed late.

Let's put some of those things together for a second.

A 3/2 for three mana - colorless or no - isn't really that good for Constructed deck. That body would have a hard time cracking Standard, let alone Modern. But how do we rate Vigilance? Weaker than some combat abilities but nicely packaged alongside Tormod's Cryptkeeper's tap one.

Like Radha, Heart of Keld, this card isn't so exciting on its face before we dig into the text box, but it weirdly has the ability to win the game by itself; or at least situationally, prevent the opponent from doing so.

Strangest single implication: If it's to be played, Tormod's Cryptkeeper HAS to be a main deck card. Like no one would ever sideboard a card that costs this much to fight graveyard decks that can go off for zero mana, let alone force themselves into the submission of summoning sickness.

As such, I have a hard time imagining this cracks any Modern 60. Not while Bonecrusher Giant is around, anyway.

In Limited play? Tormod's Cryptkeeper might have some pretty good juice for the opponent's game-winning Rare. It won't likely trade straight up - we're talking about Common versus Rare (or even Mythic Rare) here - but it might buy you some time or take the fatal edge off. Main deck every time for sure.

You have combo decks that try to do one of these...

... Such that if you disrupt them, you probably got a two-for-one and set them back by fifteen draw steps. They might still kill you next turn, but more likely, they'll have to rebuild some resources.

But there are also combo decks that try to do one of these:

When they go off, sometimes they kill you on the spot. Sometimes they don't and you breathe a sigh of relief... Until you realize they are fifteen cards ahead of you - including permanent resources on the battlefield - and just drew several extra cards, and if you don't kill them on your turn you're basically in for a redux, except they're going to have untapped a ton of additional mana.

A High Tide deck might fail to Stroke you out the turn they first try... But they probably also just Thawed ten or so Islands out. Did they kill you? Maybe not, but they are passing holding seven and have a 4/5 flyer in play with all their lands untapped. You tell me who's ahead.

Or like a ton of these Primeval Titan guys. You managed not to be Slain by their Stronghold but can't really be happy about the six extra cards they drew, many of which were de facto Demonic Tutors.

Galvanic Relay, if it is good, is one of the combo pieces of that broad second category. Why? It' can't - actually can't - really help you win on your turn. 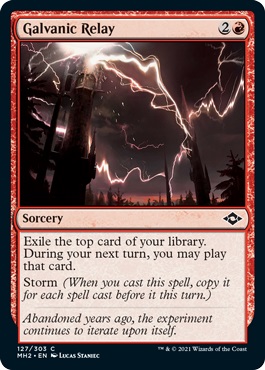 If this said "until the end of your next turn" it would be a far different Magic: The Gathering spell. This one... Isn't that.

Where can I see this being useful?

Decks that already like the Storm mechanic, but maybe want some more oomph (or anti-permission, given the reprinting of Counterspell). Not only can you convert your present-turn Dark Rituals various into future-turn equivalents (but with more mana in play, hopefully), you can do things like chain Galvanic Relays into more Galvanic Relays. If you're not under a lot of pressure, why even try to go off when you can semi-go off and build advantages? It might be the difference between the opponent actually being able to interact with you and burying them mercilessly.

If this is a playable way to go about it, I assume Galvanic Relay is sideboard only; basically, the opposite of Tormod's Cryptkeeper. Most decks that have shells that can exploit Storm are built to win all in one turn. You wouldn't slow down to build resources on purpose! You would primarily want a card like this if you were up against one-for-one permission or disruption. Counterspell or Thoughtseize. Because chaining basically anything into anything could help you to out-card and overpower the opponent over multiple turns.

What about Modern Horizons 2 Limited? 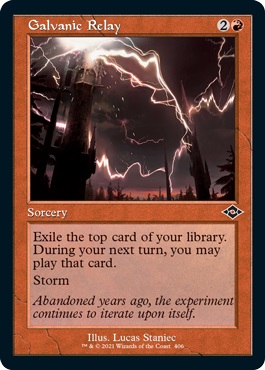 This, my friends, is - prior to Modern Horizons 2 - the only card ever printed with the ability Wizardcycling. You discard this card, paying three mana, to search your library for a Wizard. It's an instant speed Wizards-specific Demonic Tutor for three!

This, my friends, is the only other card I've ever seen with Wizardcycling: 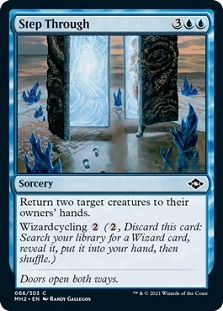 No MichaelJ, you are probably saying. That is a filthy lie. 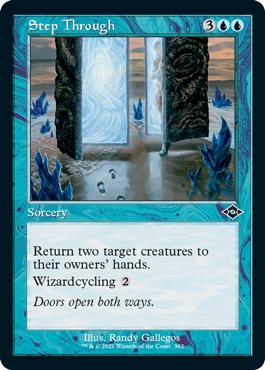 On its face, Step Through - a five-mana SORCERY with an ability that barely cracked Constructed playability in 1997 - is unlikely to see play.

Mayhap in Modern Horizons 2 Limited? But Undo for five is really, really challenging to imagine, even for forty-card decks.

That's part of what's tricky about this spell. Undo-for-five is only the backup plan. Is it a great backup plan? No. Is it a slightly below average backup plan? Still no. But I'm sure at some point it will win a game such that one player is very happy and the other player is very salty. Double if you're bouncing your own creatures.

But Wizards are tricky! This card is just a colorless Demonic Tutor... With upside!

Imagine for a second this card was Standard-legal.

That is a Wizard you want to play (or at least have access to) at a high rate of regularity by turn three; and just having Step Through in your deck helps make that consistent.

The Irencrag Pyromancer people, by the way, work in an existing deck chock full of cards like this:

Cards that are both themselves Wizards and reward you for cycling. Wizardcycling is in fact cycling.

Now of course Step Through is not going to be Standard-legal. I'm just saying it would probably find a pretty quick home if it were.

What about actual Modern? Any Wizards you might ever want to draw?

THESE TWO ARE CONSTANTLY IN THE SAME DECK!

How insane is this on six?

You can now instant speed Tutor for a game-winning Shock:

Up against Storm? Spend your second turn Wizardcycling and your third-turn ruining lives:

Want to know the even crazier part? Step Through is technically Blue... But the part of the card you actually want isn't. Mono-Red can play this card. Mono-Green can, if they want.

Anathemancer is not a popular card. But what if you could play one and just Toolbox for it for long games? Might that be a source of match winning inevitability?

Boros Reckoner was an important combo piece for years. Might it return to glory - as either a fair or unfair card - if it were suddenly super easy to get?

Certain Wizards don't see a lot of big format play, like Gadwick, the Wizened. There is nothing wrong with Gadwick. You just don't want to draw him in fast formats where you have to defend yourself. But as a singleton after an attrition battle? Silver bullet on, my friends! There are lots of pricey Wizards you might consider... Venser, Shaper Savant comes to mind in a Snapcaster Mage-y way. As do multiple forms of Niv-Mizzet. What do you think happens in a Control matchup when you discard Step Through (un-counter-able) for Niv-Mizzet, Parun (un-counter-able)? Like, even if they have an answer their life stinks, right? And if you did it with mana open? It might take a few turns, but surely you would be at the advantage.

I don't know-know that Step Through will be Modern playable. But I do think you have to ask yourself certain questions. Like, "If they can't Counterspell my Demonic Tutor and I can play it for free, can I make a deck fast enough to exploit all that?"

Or, "Are their Wizards with enough impact to justify the deck-building cost of Step Through?"

To me, the answer really seems affirmative on both counts.

Both decks that want to increase their rate of finding catalyst-type Wizards (think "Goblin Electromancer") and those desiring silver bullets (think "Niv-Mizzet, Parun") might just consider this otherwise clunky, slow, Common with an ability very few wanted for Constructed literal decades ago.