Ral, Izzet Viceroy is the hot new Planeswalker from Guilds of Ravnica.

We know from Teferi, Hero of Dominaria, that a five-mana, multicolored Blue Planeswalker can grow into the format's defining end game threat. Might lightning strike a second time with Ral?

At the very least, this card seems "good enough" but demands (and rewards) some non-intuitive approaches. Following are some synergies and play patterns I've identified to help you get a leg up in using this exciting new tool. 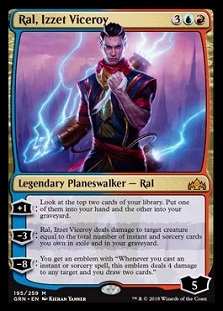 [-3]: Ral, Izzet Viceroy deals damage to target creature equal to the total number of instant and sorcery cards you own in exile and in your graveyard.

Ral's middle ability gives us insight RE: not one, but two different ways to play our early turns.

Now, Blue decks from regular old control to dedicated Approach of the Second Sun hybrid combo decks have run a variety of cheap instants and sorceries. Some of these are played just to sculpt your hand. In the early game, cycling a Hieroglyphic Illumination or playing an Opt can help you hit your land drops. Later in a game, they can dig you to your end game finisher (a la the Approach of the Second Sun) or keep you alive with other action while Teferi establishes his presence. Everyone knows these cards have a place, even if they don't agree on which ones.

For the most part, you don't get paid for playing these cards. You cast your Opt on turn one and what you get out of it is 1) being able to use your first Island instead of leaving the land untapped, and 2) increasing the likelihood you hit your land drops early. Both are good things, but neither has a particularly tangible quality in general.

The key cyclers in Standard will themselves largely cycle out of Standard as Guilds of Ravnica enters; we will, though, still have the aforementioned Opt, Anticipate, and probably something new. These cards will do more for prospective Ral players than they might in general. Ral costs five, so ramping up to be able to cast him isn't trivial. Further, the more cheap card draw you play, the more you'll get out of the [-3]. On top of it all, once you've hit Ral's limit break, the presence of these cards in your deck will help you trigger his emblem continually until the game ends. 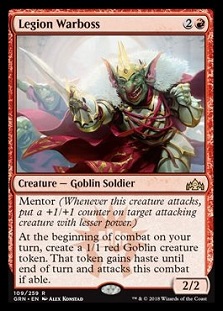 Now, cheap card draw is not the only kind of instant or sorcery a

mage might be casting early in the game. The Red Deck is going to have an inheritor; if early indications from Guilds of Ravnica mean anything... Let's just say Legion Warboss is just the first threat that has been revealed. Either that second turn 5/4 is going to die or you are. You get it.

Control deck is going to probably play cheap Red removal in addition to cheap Blue card draw. The [-3] ability is going to pay you off for playing both kinds of cards. You've got to love the idea of drawing a Lightning Strike, firing it off for three, pinging yet another four damage... And presumably drawing two more burn cards.

For that matter, who is to say Ral has to be played in a

With Amonkhet rotating, there is going to be a Glorybringer-sized hole at the Red Deck five slot. There may be Blue-Red incentives to go

, especially for a set that has Steam Vents. Ral is obviously a very different kind of top end threat; but it is probably more reliable than Vance's Blasting Cannons (if a little more expensive).

The fast Wizards deck in Standard is siding extra land and Blasting Cannons as a kind of sideboard transformation; opponents are all bringing in super quick small creature removal or sweepers; burn cards and durable card advantage can put them on the wrong corner of the rock-paper-scissors triangle... Which is all part of what has given that deck so much concentrated format oomph at a time when all the dust was supposed to have already settled.

The major difference between Teferi's [+1] card draw ability and Ral's is that Teferi's untaps two lands. That means that you can reliably sit back and protect yourself with permission or removal even after tapping out for Teferi.

While the tradition of Andrew Cuneo does not really plan to tap out on its own turn five, this untap trigger allows a Teferi player to steal a turn with Negate, Essence Scatter, or even Blink of an Eye. Ral can't do that. Instead, when you tap out for Ral, you kind of have to rely on his enormous loyalty.

Essentially, six loyalty on a five-mana Planeswalker is just an enormous part of the package. Presumably you're using your instants and sorceries [from the section above] to keep the battlefield relatively clear on turns 1-4. The best thing is to just Counterspell whatever they do on turn four, untap, and slam Ral on an empty table. They then get one turn to hammer you for the full six. Two Lightning Strikes? You probably couldn't have done anything about that even with a Teferi-untap. But there aren't a lot of creatures that can come over from zero that also have haste. Giganotosaurus? More than big enough. Also not nearly fast enough.

Once you untap with Ral and he's rolling? Ral can kind of protect himself. The [+1] ability is not just card drawing, it's selection. Not just selection, Ral is actually fueling the [-3] ability with the [+1]. Didn't find what you want? You can put another instant or sorcery into the graveyard to power up your self-contained removal next turn.

Looking at three cards a turn - minimum - will help you just keep playing with Ral in play. Anything past that is going to be an avalanche of card advantage and frustration for the opponent that dwarfs the fortress you may remember as Teferi's mid-game.

If All Else Fails, There's Narcomoeba 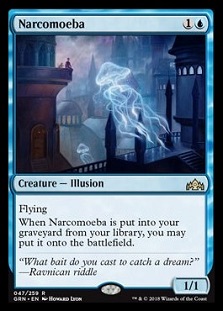 Narcomoeba has been played in Nomads en-Kor decks and Golgari Grave-Troll decks both. In Modern today, one of its most strategically useful modes is just chump blocking Red beaters to buy time.

Why do I bring Narcomoeba up now?

Not only does Ral's [+1] have natural synergy with the Illusion, but so does an entire mechanic coming up in Guilds of Ravnica. 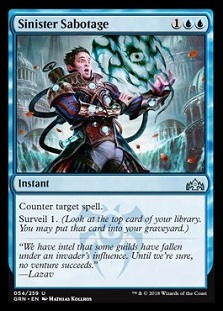 The new Surveil mechanic allows Blue mages to put cards from their libraries directly into their graveyards... You know, like Narcomoeba. When Caw-Blade was the best deck in Standard, one reason it was so effective was that WotC R&D had not anticipated a deck that could play so few creatures while taking such full advantage of Stoneforge Mystic.

Presumably, Ral is going to be most effective in a deck with mostly instants and sorceries. But if there is room for a creature or four, why not Narcomoeba?

No, Narcomoeba is not particularly high impact... If you're paying retail for it.

But what about when you're getting it for free?

An extra 1/1 flyer off of your Sinister Sabotage (especially during the opponent's turn) is just a very nice bonus. But tapping out for Ral, going [+1] to draw a card... and making a 1/1 flyer as well? That's awesome, right? That's a hell of a loyalty-building first swing by a Planeswalker. That's some Knight-Errant stuff on top of everything else; that's what that is!

Ral can obviously protect himself with the [-3]. As we've said, the ability to "start" at six loyalty is a kind of self-preservation as well. But drawing a card while making a FREE blocker is an enormous step toward untapping with your best card in play, while building loyalty. No, the 1/1 body on Narcomoeba is not durable. It doesn't have to be. When it comes up? It's simply fantastic... Like combining Jace and Elspeth and cards in hand all at once.

Am I serious about playing Narcomoeba? It is going to depend on how many Surveil cards (or similar effects) are available and immediately playable. With a lot of Surveil, the deck-building cost of including Narcomoeba goes down. If there isn't a lot of Surveil you want to play, you either have to lean more heavily on Ral for the Narcomoeba synergy... or just pay retail more often. You don't want to pay that retail cost very often, let's be honest. The fail state may not be too bad... But there's a reason it's not the preferred way to get a 1/1 into play.

Wait for It... Ultimate Ral

For Planeswalkers who have potentially game-ending Limit Break abilities, it is often desirable to wait a turn to stockpile an extra loyalty, rather than making the big play as soon as you can afford it. For example, if you go for Teferi's emblem once you have nine loyalty instead of eight, you can literally double the emblem's efficacy. Sure, you can exile a permanent using your draw step at eight loyalty; but if you keep the Hero of Dominaria around, you can use both your draw step and Teferi's [+1] draw ability to really wedge the opponent into an exiled permanent corner.

This is even more true for Ral than it is for Teferi. Why? Ral's emblem trigger is very specific. You need to cast an instant or sorcery spell. With Teferi you are at least peeling a card every turn to get a trigger on his emblem. With Ral, that card could be a Mountain... or a Narcomoeba apparently :)

Even if it is an instant, it might be a theoretically desirable Sinister Sabotage... Something that you can't immediately play on account of being a non-proactive Counterspell. However, between your turn's draw step and the powerful ability to filter through two additional cards on the [+1], you can dramatically increase not only Ral's hit rate, but velocity. After all, any qualifying instant or sorcery you cast can snowball you into as many as two more swings each, thanks to the trigger itself.

All these points are moot, of course, if you've already got an extra Teferi and / or Ral in your hand (from all those extra cards you've been drawing).

My initial forecast on this card is a high Role Player rather than a ubiquitous four-of cross-format All-Star... But Ral is going to break some backs in Standard for sure.