There is a staggering amount of Magic art, and often, the newest or cheapest version is bought when players make decks. When you have a limited amount of time to build a deck and get it all sleeved and finally together, you play with that oddly connective white-border/black-border mess with different artworks. But once youâve been playing for months with a concoction or even a deck âimprovedâ upon by yourself, having a play set of different artworks has to go. They all have to be the same art, and this usually begins with your commons. Itâs an ask to a friendâa non-trade saying, âYeah, okay, whatever,â to get a free $.25, or itâs the laziest bulk-rare trade ever.

Whether youâre a foil player or a foil-Russian-misprinted-and-altered collector, you change your play sets to fit you. My job today is to shine the light on cards you may know of but that you havenât sat down and looked closely atâlook at different art versions to see a more perfect depiction.

I saw the Grand Prix Singapore Top 8 decks and figured thatâs a great place to startâeven top-tabled decks could have a very cheap art improvement with a little showcasing.

Letâs upgrade those commons in your decks!

Ornithopter is built on the original concept of 1994. I love the Leonardo Da Vinci/Guilermo Del Toro idea of concept sketch page as finished artâsure, donât we all? Thereâs just something to Danaâs that makes me want to play it. Itâs a refreshing lightness, perhaps, that really makes me feel that Iâm attacking for 0. Itâs always like a kite, devoid of strength or will. Itâs there to be built upon, to be improved, and this art really speaks to the mechanics of the card more the other versions in my mind.

Lars Grant-West made this beautiful promo of Vault Skirge, earning him a nod in Spectrum 19, an annual art book signifying the best in fantastic art, that of Imaginative Realism. I kick myself often for not buying it from him! His robot/imp/insectoid creature is quintessentially Mirrodin, a triumph of taking a singular creature and, by concept alone, you know what plane itâs on. 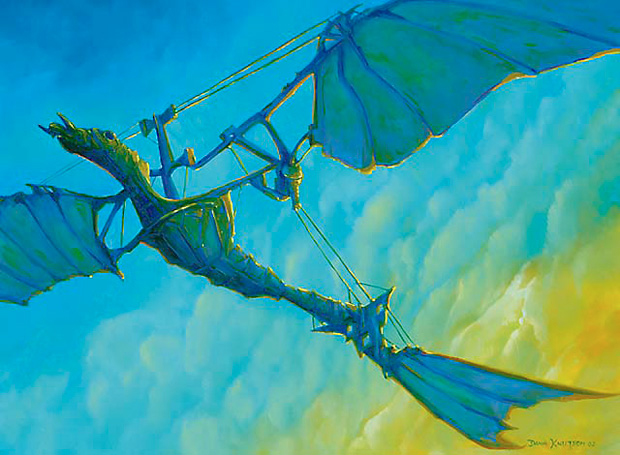 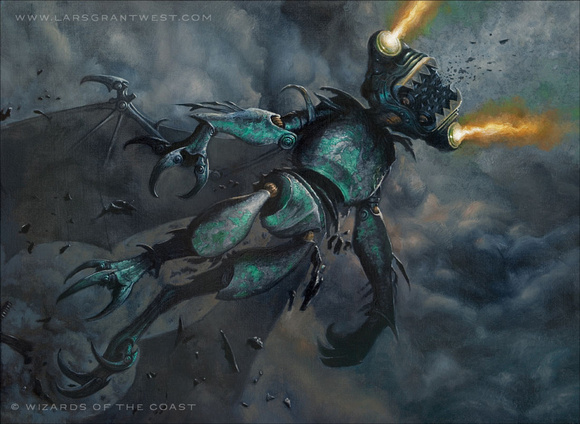 Terminate showcases a pivotal storyline moment of Darigaaz, a dragon hellbent on gathering power. These singular card as set explanations still occur, so choosing this version is an iconic idea. I love the Friday Night Magic promo version, but the original will always be in my decksâunless itâs Vintage Art Constructed with Wayneâs deck, necessitating his version.

Duressâs art is a promo from the IDW comic-book line. We never were able to see the full Ashiok storyline play out, but the promos are beautiful! Anything I see to flesh out Ashiok is something necessary to jam into decks for me. This card isnât cheap, but pretty things are often expensive, after all. 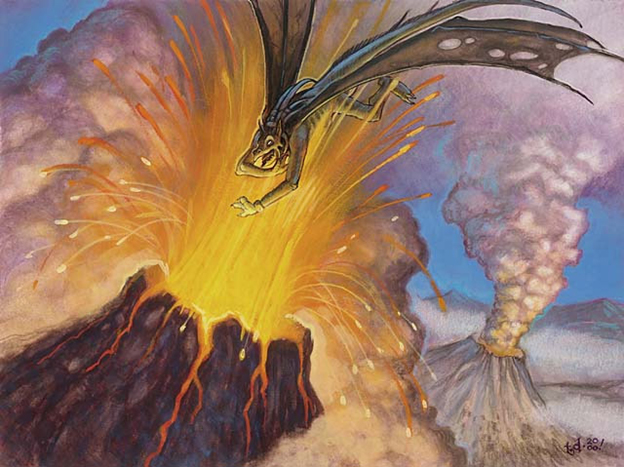 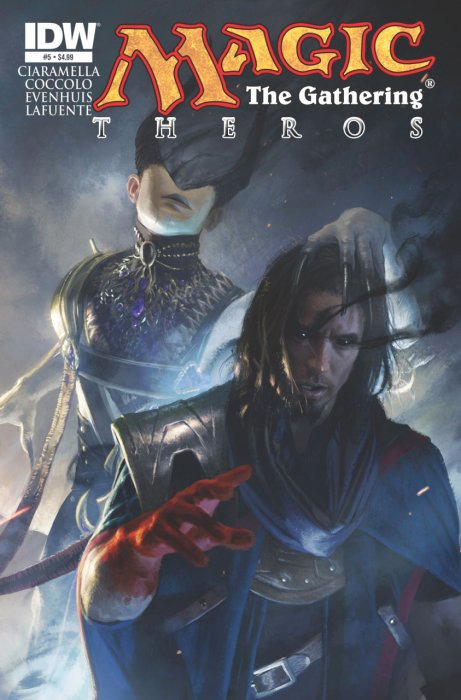 This deck can really only have a common in the sideboard, and Iâve seen a Disenchant in there! I loveâs Donato Giancolaâs art quite a bit, owning an original or two from him. I also really enjoy any Phyrexian mention in my flavor texts. Brings me back to the 1990s, you know? 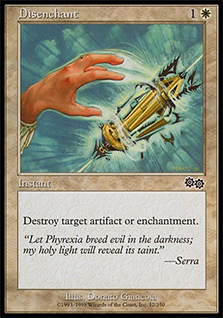 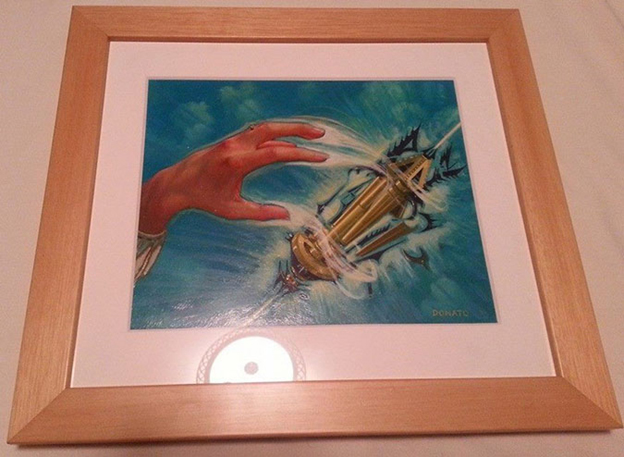 Lightning Bolt has been so iconic for so long that it only has three versions. I hope it gets opened up to more supplemental products. I like VÃ©roniqueâs version, as a hand (a dragonâs?), but every Kevy Metall out there may differ for now. Perhaps in a few years weâll see a Ral Zarek version in a promo if he ever gets the spotlight. I hope he does! 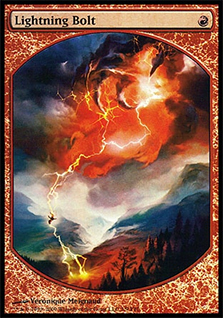 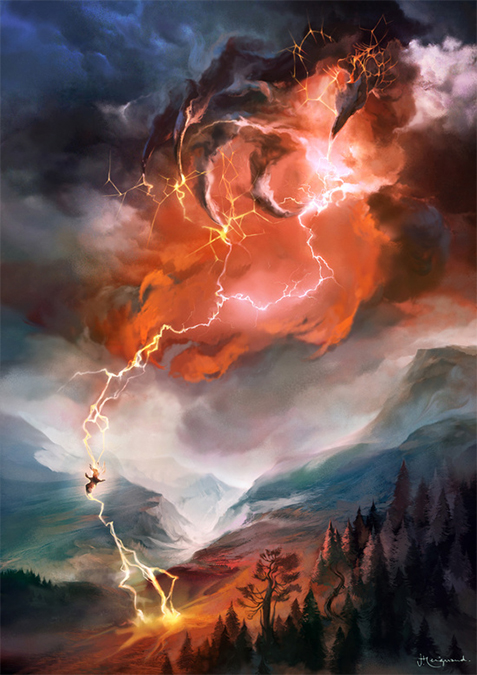 Qasali Pridemage has one promo, and it feels lot more like Naya than the original version. You can clearly see the vines and building materials, and it exudes that Mesoamerican/Aztec sort of feel that Naya was based on. I also see that shoulder brace in purple and gold, being a Minnesota Vikings fair-weather fan. Purple is the regal color, and in medieval Europe, a common person just couldnât afford or even buy that color. We never see much purple in card arts unless itâs a horizon painted by Chris Rahn.

Negate has been printed a bunch of times in the core set with the same artwork, making you perhaps forget about the textless version with Jace saying âno easy buckets,â countering both your jump shot and a fire-based spell. I think itâs delightful, and itâs really not very expensive. 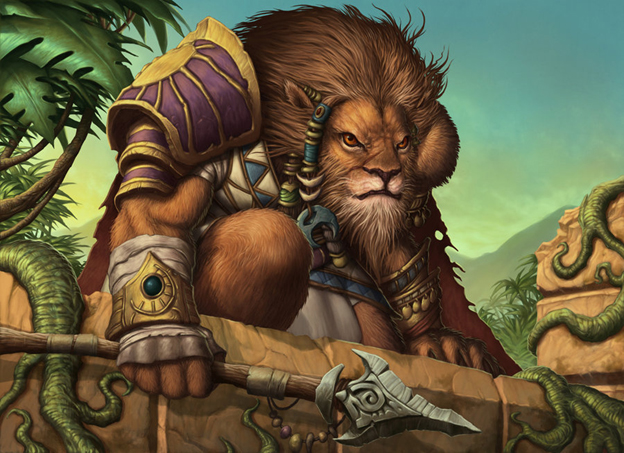 Gitaxian Probeâs original art brings you, as the viewer, into the horror of Phyrexia. The promo version is what you see if youâre strapped down to a table, waiting to be probed and eviscerated. While one artworks is a logical viewerâs perspective; Trevorâs below is bit more chilling of a representation of Mirrodinâs new normal.

Mana Leak has three versions of its art, and one of them you may not have seen yet. In a vacuum, you wonder why he isnât in generic fantasy clothing. Well, this was during Kamigawa block, so all the promotional cards fit into that as well. I love textless cardsâthe allow the art to breathe a lot more. The character is also the same one for Field of Reality! How cool is that? 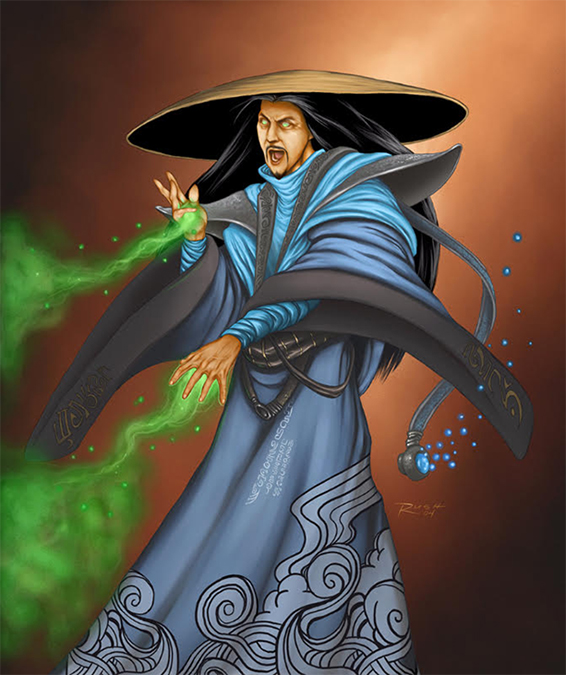 Faithless Looting is exactly the epitome of Planeswalker Dack Fayden, and what better depiction exists than this chump stealing something, only to jettison other stuff in the meantime? Karl dug deep in his painterly style, making these comic depictions also work as cards, reading at 2" Ã 3" and at 4" Ã 6" with ease. Thatâs absurdly difficult, and we donât even consider it. Itâs just natural for him to make it flawless. In addition, Karl jumps back and forth in his paintings with digital or traditional mediums. If you look closely, he uses paintbrush strokes, but itâs becoming more difficult to tell whatâs ârealâ and what isnât. 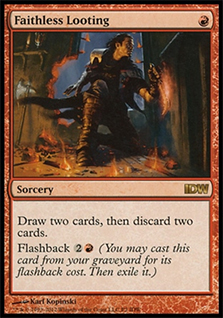 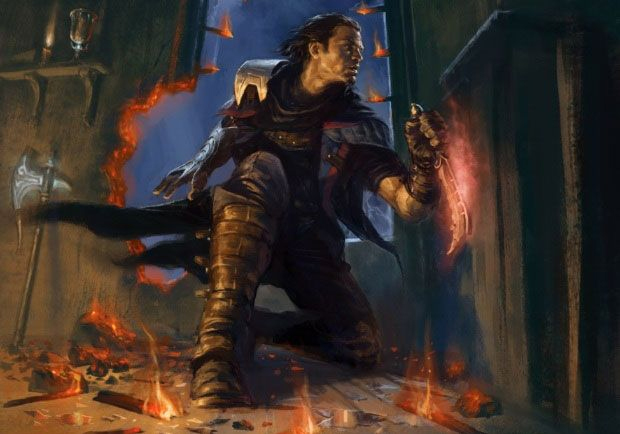 While doing research on commons in decks, I came across these beauties, and while they might have had homes in the past, if you ever build a deck, even at your kitchen table with these mechanics, use these beautiful examples of art. Iâll let them breathe a little just so you can soak them up. Give your eyeballs some candyâthatâs how I like to live my life. 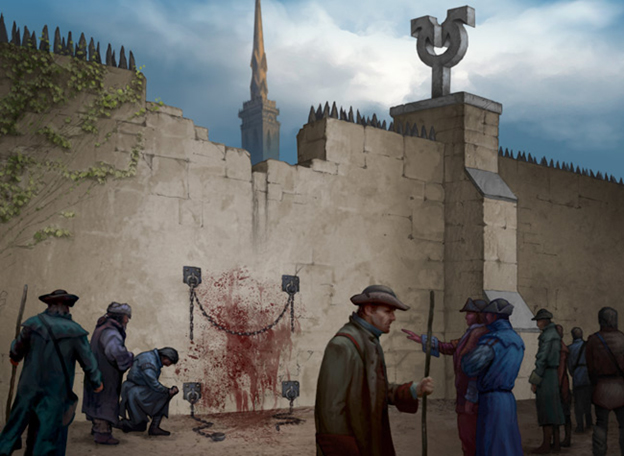 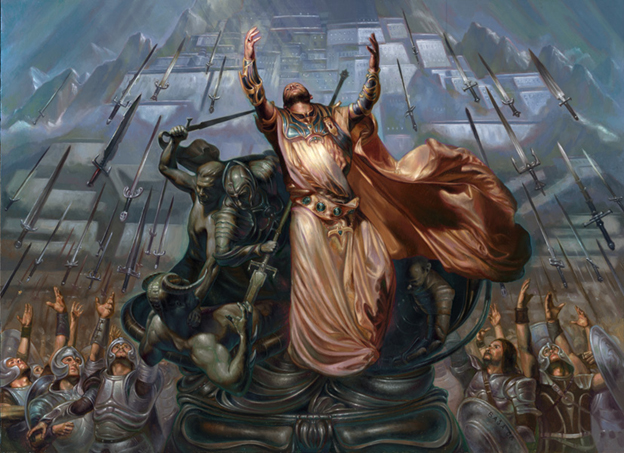 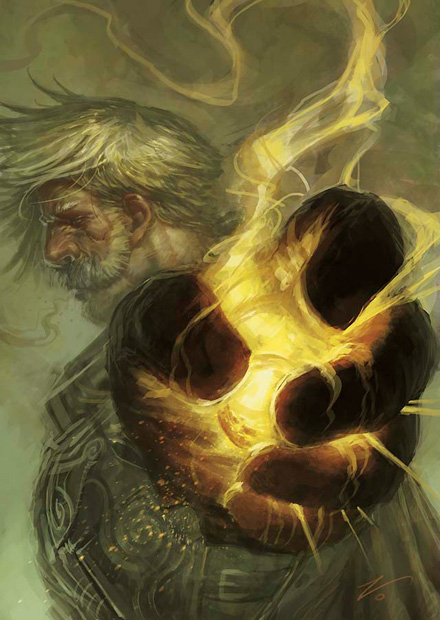 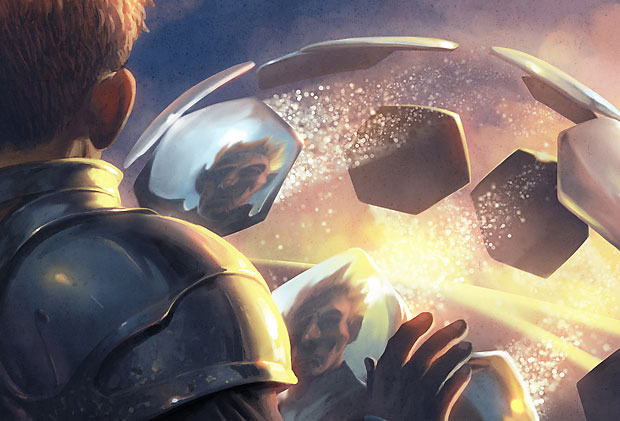 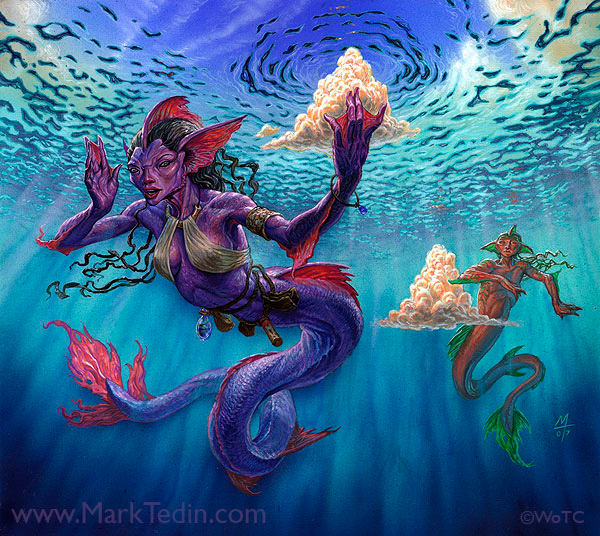 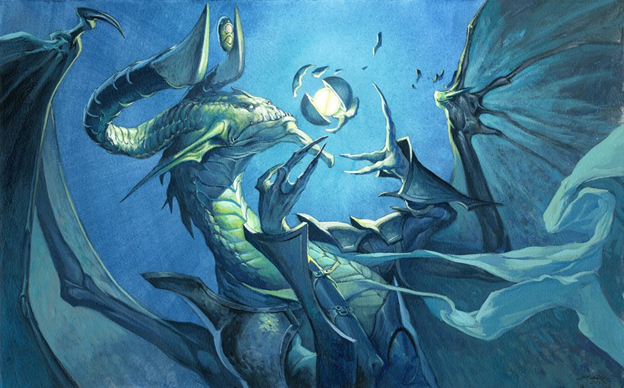 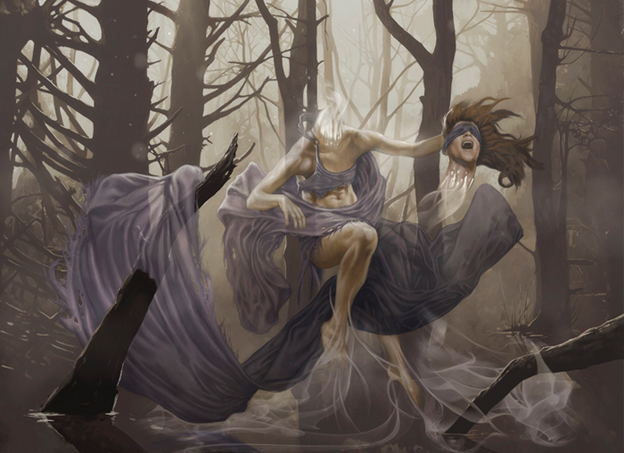 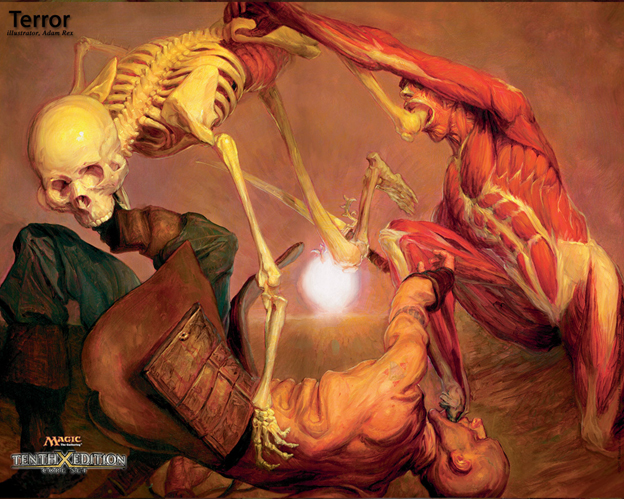 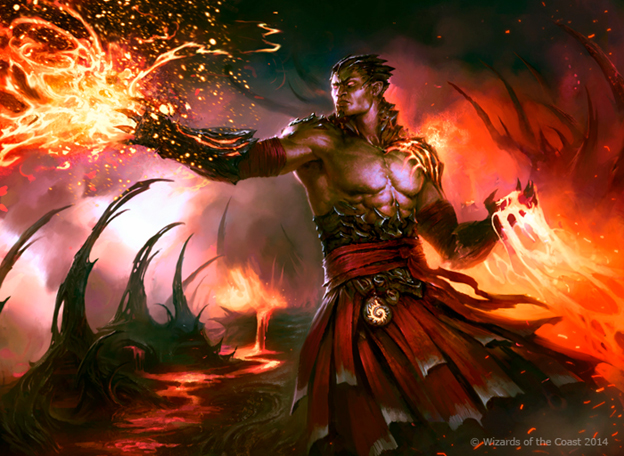 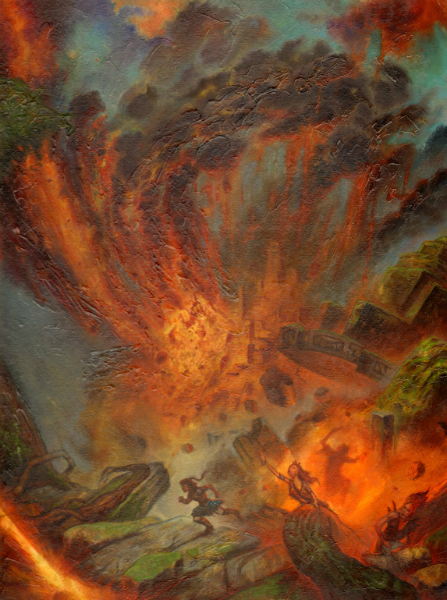 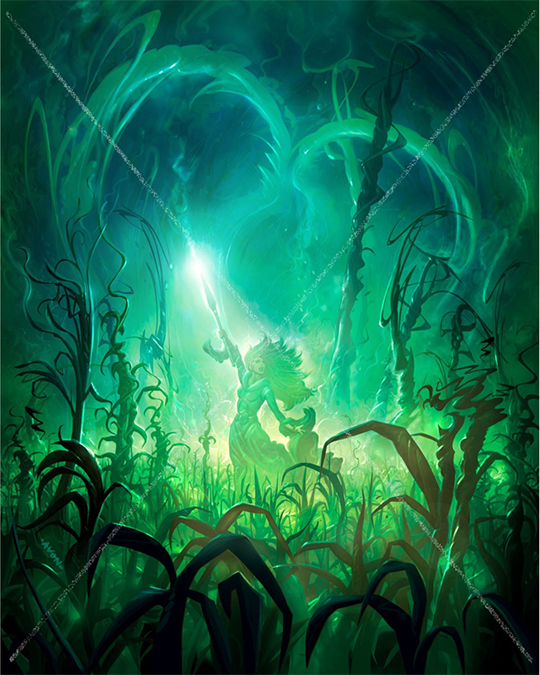 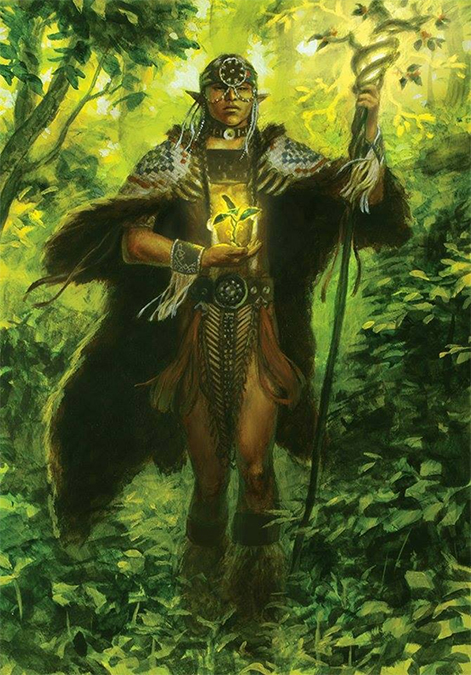 Ending with Winona Nelson is always a good choice. The other paintings are just cool versions, but Winonaâs differs. You see, this is a bit of a self-portrait of her. As she is an Ojibwe Native American, you start to see the artwork without the card, and itâs abundantly clear to see her narrative elements, including traditional garments and reverence she had in painting this. Itâs one of the best artworks in the last five years that too few people have even seen. I think itâs utterly delightful.

I hope you could find a few cards you may use. I know I had some fun looking at new artworks or ones Iâd forgotten. If you want to do this again, let me know, and if you missed my first two installments, Better Basic Lands and Better Commander Art, check them out!