Weâre going to have a little history lesson today. I find world-building to be a pretty lofty effort and one that stumps new players in terms of making anything even remotely unique. New Vorthoses do the expanded-universe idea pretty quickly on Tumblr, adding elaborate stories and nuance to established characters. What separates really great worlds from marginal, forgettable places is the level of detail. Explain too much, and itâs a bland, overly saturated, stale world. Explain too little, and your flavorful core set is a dead fish. Leaning on tropes is good for making a new world, but the effort comes in making a cohesive theme to block your set together from established things.

Letâs start with arguably the best Magic set in the past decade and how the world-building effort relates to Khans of Tarkir. The set that set a standard, is Innistrad.

Letâs review what Innistrad was by reading the instructions to artists. Nearly always, this is the clearest picture. Weâll begin with a quote from Steve Belledinâs incredible blog Push and Pull:

The world was to have among other things as inspiration, 18th century Prussia.

Prussia was a region up until the 1800s that was located over modern-day Germany and some of its neighbors to the northeast. It was characteristically flat and, for historical purposes, you need to know that Prussians were excellent military strategists and commanders. 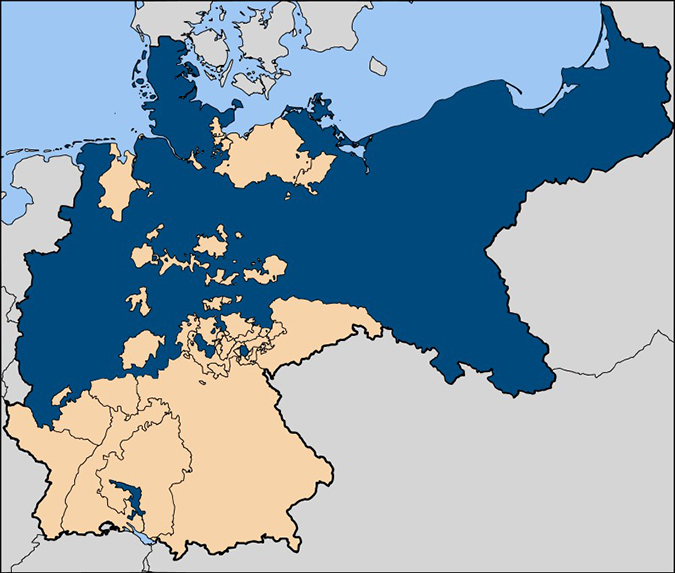 Prussia in 1882 via Wikipedia

To give some perspective on how large things were, the Prussians, and later Weimar Germany, wasnât a slouchy kingdom. 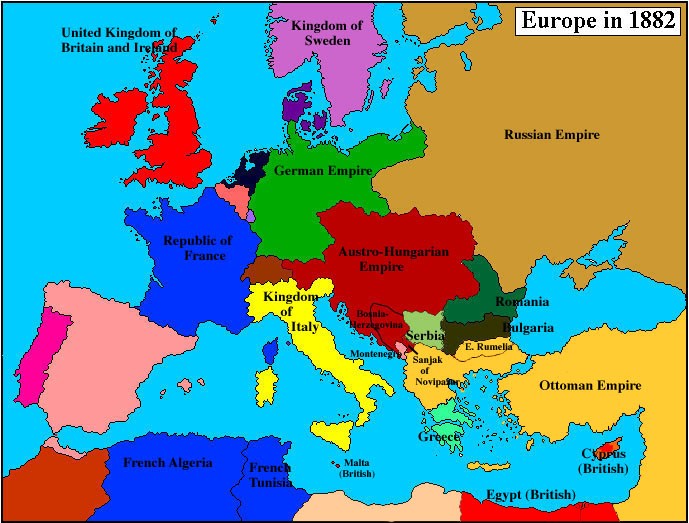 Via John Heineman and bc.edu

Was it an elaborate place? Sure, it was a bit, but think military. It loved its regalia, and the Innistrad style choices reflect this.

Prussian Homage, Jan Matejko. After admitting the dependence of Prussia to the Polish crown, Albert of Prussia receives Ducal Prussia as a fief from King Sigismund I the Old of Poland in 1525.

Prussian humans and Innistrad humans felt similar. Look at the clothing similarities alone! To many, itâs all Renaissance crap, but the coats align. Trust me on that one. 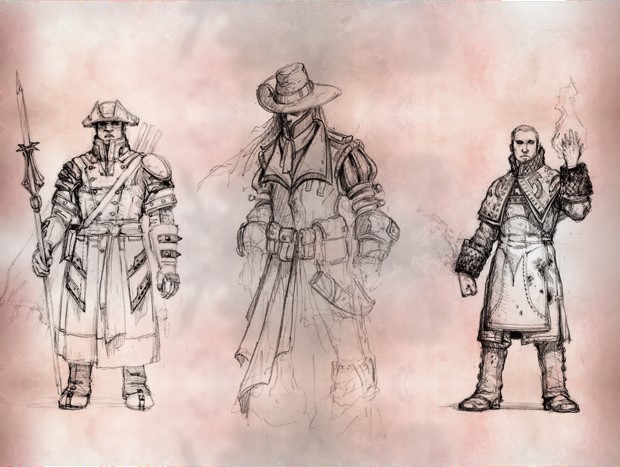 The creative team chose Prussia because itâs cool and different, but most importantly, it allowed for a variety of styles under one kingdom. Kessig was roughly the Black Forest area of Southwest Germany, Gavony was Northern German, Nephalia was the lowland coast, and Stensia was the Alps mountain range and near Ludwig IIâs castle in Fuessen. Thereâs overlap, but this set is incredibly Germanic. Somehow, the idea of using a real-world kingdom can bring the variety that Magic requires. A single country is too restrictive, and frankly, it doesnât have enough stuff to use to differentiate tribes.

Remember that a new concept is to use an empire or kingdom instead of a country, region, or continent. 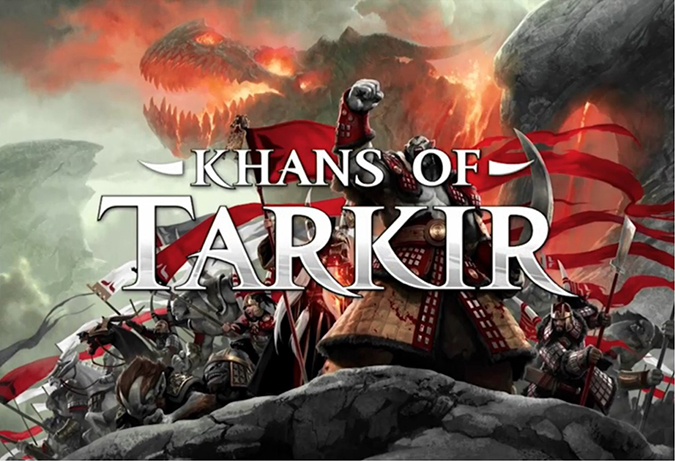 If you remember your world-history class, Genghis Khan made himself an enormous empire, stretching from China to Turkey. He conquered some of the hardest terrain known and did so with some surprisingly advanced politics. To save you from reading pages of content, growing bored, and then checking in to see if Ochoa is battling evil today, watch this video; itâs worth your time, and remember: Think of the colors of Magic the entire time!

So, once Genghis Khan passed away, his heirs split his territory into four khanates. Ah, this is where Khans of Tarkir starts to take shape! 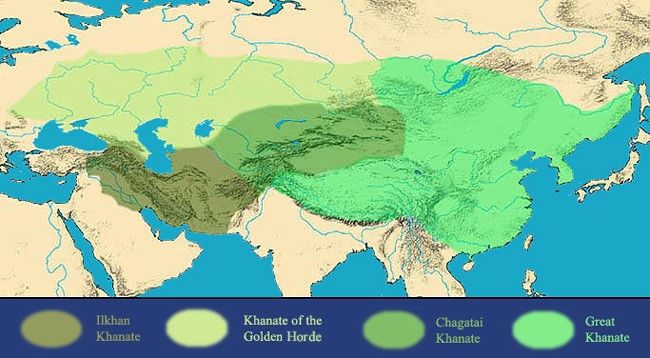 Four khanates from this wiki 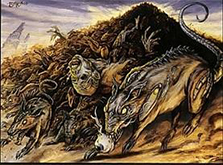 That is some massive territory considering they only had the Pony Express for messaging and gathering taxes. That was due to the Mongolian speed of everythingâremember those old silk roads you learned about when you were fifteen? It was the Mongols who reopened those roads. Fashion was a bit more uniform, but remember that whole Black Death thing? Rats also mightâve loved to traverse thousands of miles.

I love paintings from the Ottoman Empireâitâs all so Byzantine Christianâfeeling, and yet, itâs neither at the same time. Mongolians were always so busy traveling, expanding territory, and looting that permanent structures and art werenât really things they stressed. They were nomads, and their cavalry archers were like tanks. Siege weapons were silly to them because they were tradersâthey always found a way in. 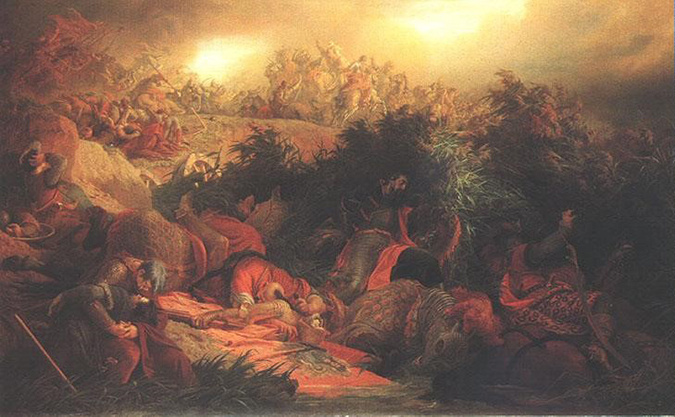 Istanbul is on my list of places to visit, if simply for the cool hats and beards on everyone. I grew up in Germany, and the marbled figures, hairless and dull, are the Westernized perspective of history. Itâs a lens, and frankly, itâs one thatâs just over. 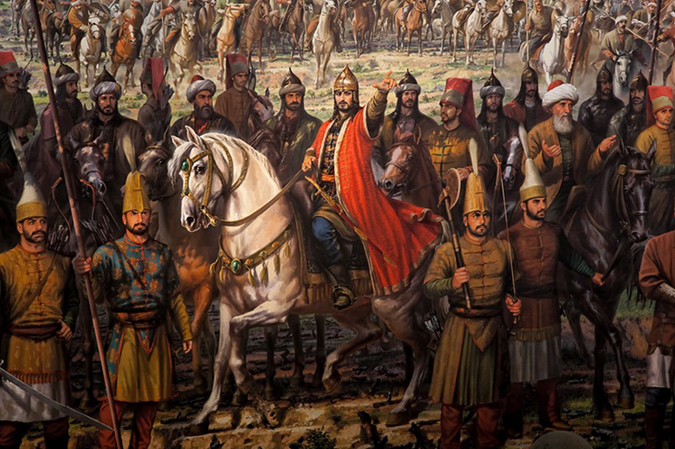 This art feels Asian, but the Magic characters in Khans of Tarkir don't all look Asian. Youâre correct. The style guide, from images alone, clearly shows that this isnât exactly Mongolia. Itâs âmore than Mongolia.â Weâre not just in Kamigawa-light, Kamigawa being an example of a deep dive that went too deep and was impossible to easily penetrate.

What came after these khanates in the western edge was the Ottoman Empire. The Ottoman Turks are what the first images of Tarkir humans look like. You can see more of the visual style here. I literally Googled these in seconds, and boom, yup, Khans of Tarkir is Mongolia in region but straight-up Ottoman Turk in styleâ.â.â.âwhich was just a later khanate area by hundreds of years. World-building can makes these artistic choices.

So letâs see where our khanates line up to the Khans of Tarkir! 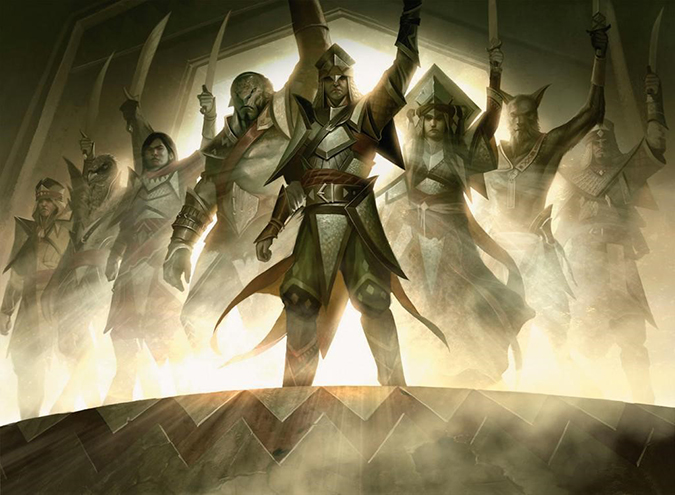 This is modern-day Azerbaijan. Itâs east of the country of Turkey and west of the Caspian Sea. I would surmise the lower part of the Golden Horde mixed with the Ilkhanate made up this group.

I had a helluva time finding a referential image for these guys because any steppe soldier, from Mongolian to Ottoman, didnât wear heavier plate armor. They were on horses with bows and arrows. They couldnât have restrictive movement. There are a few ceremonial references to some Iraqi cultures that broke off during the Ottomans, but even then, it was never fully articulated plate armor. 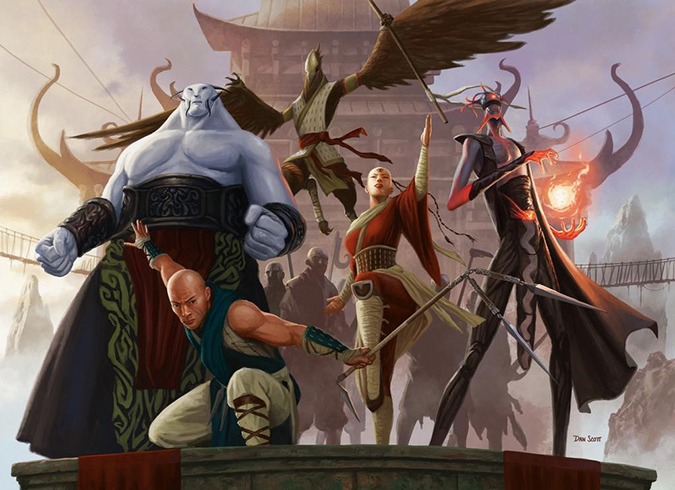 This is obviously Japanese, but while Mongolians traveled to Japan, from conflicting history, they never conquered Japan. But Tarkir needed another group, and Southeast Asia might be too confusing. Maybe, I guess, itâd be too confusing with Sultai. I donât quite understand this one. It fits the region but not the theme. Itâs not Ottoman. Itâs not a khan at all. Huh. Guess Iâll wait for Doug Beyer and Jeremy Jarvis and co. to explain why this is here. 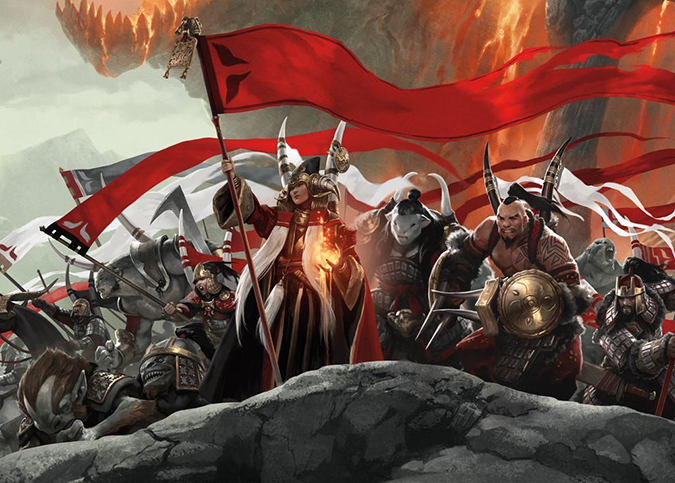 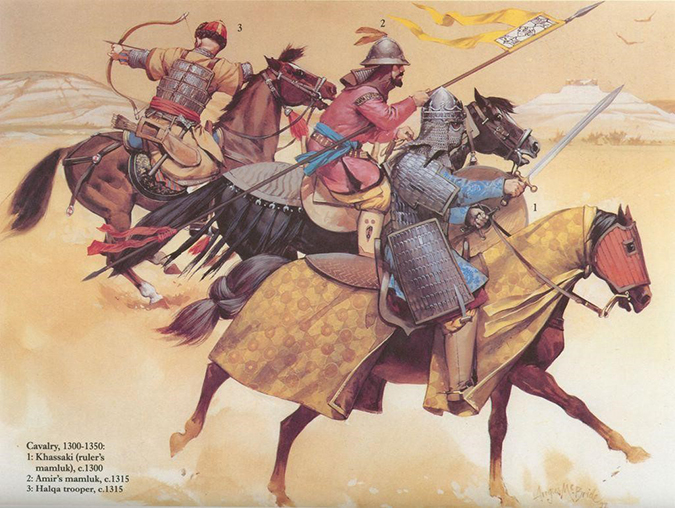 Check out the uppermost back riderâs armor and that spear!

The Nogai Khanate, or Nogai Horde, is roughly what this group is based on. It was a unified group from roughly the 1440s and 1450s through 1634. Though, visually, from the armor on the guy on the far right, it looks like Mamluk Iraq, part of the Ottoman Empire roughly 1534â1704. So, itâs roughly Armenia, Georgia, Russia, Iraq, and Kazakhstan. History is never clean, and Wizards world-building has sites in mind despite that the Great Khanate, being China, is what this group will be named due to its prominent red color. As we see more images, weâll distill styles even more. Fun! 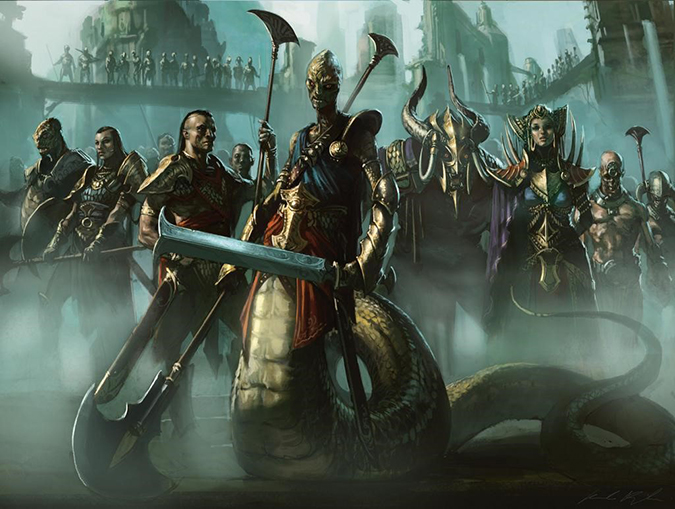 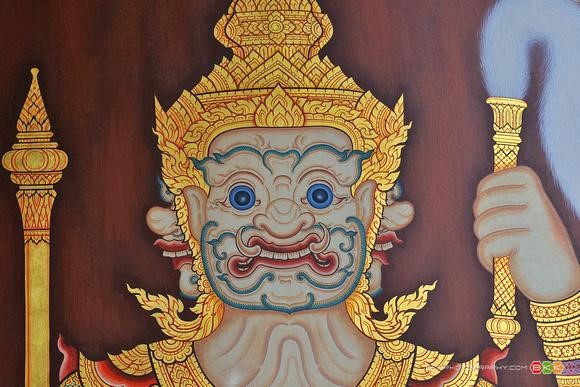 Oddly, this group is the strongest aligned to Indian symbology, but Mongolians, like Alexander the Great, never conquered India. Mongolians conquered Russians in the winter, which even Hitler failed to accomplish, but they couldnât overtake the Indian people. I see the Chagatai Khanate, mixed with the mountainous Great Khanate people. Basically, this is the Southeast Asian group of Tarkir, mixed with some India.

I see the Thai Ramakien here a lot. The Ramayana, basically Persian (Iranian) and Indian cultures, hold dear one of their most sacred stories. Itâs a super-cool myth thatâs often told by sequential artâor comics. If you have the chance, find a copy of the Ramayana online, and youâll see panels, akin to Parisian churches and only graphic novels. 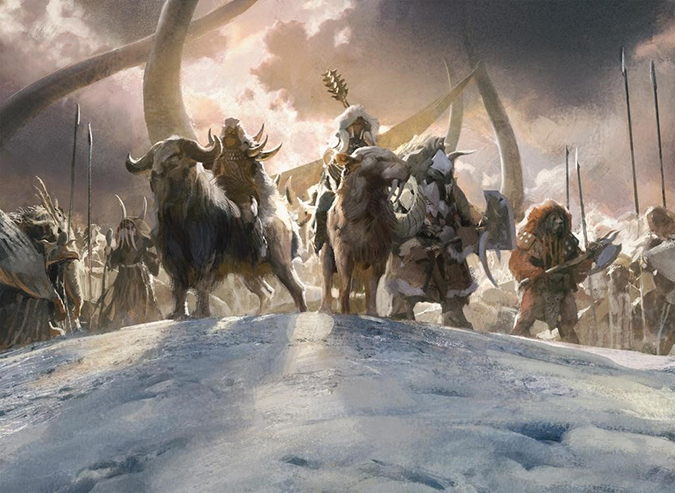 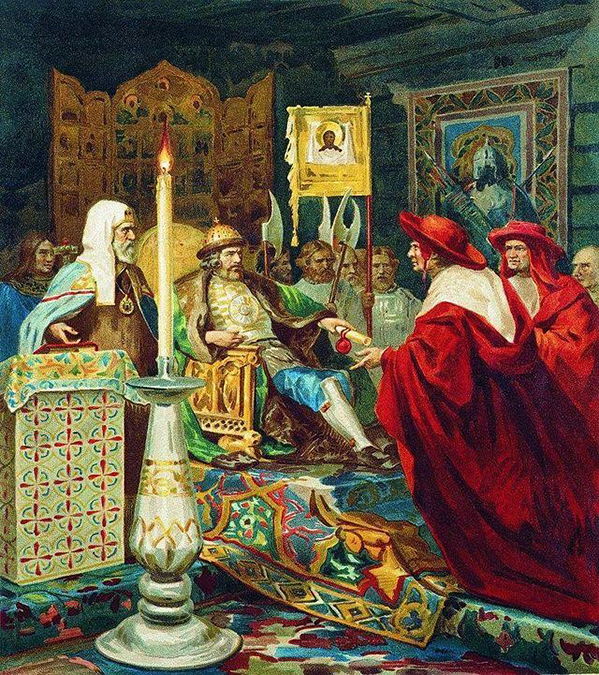 The envoys of the Roman Pope attend Alexander Nevsky.

Sketch for the mural of the Cathedral of Christ the Savior in Moscow.

The Temur frontier is actually the khanate of the Golden Horde, being basically Russia, though itâs borrowing the name from the Timurid Dynasty in modern-day Iran. So itâs Russia and itâs notâat the same time. Man, Mongolians really borrowed and mixed all the things. The furs, due to the cold, really show up here, and I plan to see a lot of sturdiness in their implements. Weâll see if their power is lowered but their toughness is increased from a flavorful standpoint.

More will come in the coming weeks; a flavor review by me will have serious depth. I have some art-history books to read in the meantime! The concept of Tarkir being more than Mongolian sticks in my mind, as creative license and blending of cultures has made something new for us Magic players. Iâm quite excited to see a Mongolian overtone mix with regional differences. We just need to see more cards to hone in on exactly where they are.

And as a bonus, here are some on flavor additions to little raiding-/Mongolian-themed Commander deck. Enjoy!