Magic is a game of numbers: sixty cards, twenty life, draw two cards, take seven damage, and add three counters. There are even more numbers surrounding the game â facts and figures, prices and trivia. They are everywhere. In Affinity for Numbers, I uncover and highlight some of the more interesting numbers in Magic. This week, those numbers are all about Eldritch Moon, the next Magic expansion to be released on July 22.

More Innistrad means more double-faced cards, including an artifact-to-creature flipper. On one side you have a mana rock and minor game clock in Cryptolith Fragment, on the other a 1/4 flying, Deathtouch creature that deals 3 damage to all opponents just by attacking. Pretty good for a mere reflection of an Eldrazi.

Emrakul, the Promised End is the second creature with protection from instants, joining Petrified Wood-Kin. 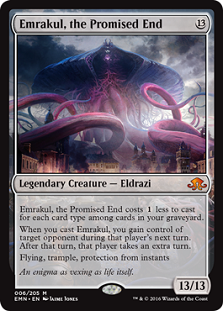 A definite nominee for "best flavor text" of the set is Geier Reach Sanitarium. Just three little words: "All are welcome." 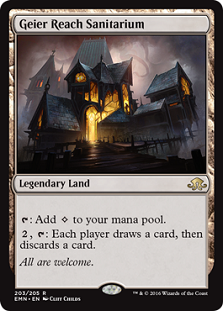 Whoever wrote that one is great at flavor texting.

Emboldened by the success of double-faced cards, Wizards has brought us Meld, where two cards go in, but only one card comes out. Usually, one would assume, as a pretty scary permanent. That's certainly the case when Hanweir Garrison and Hanweir Battlements become Hanweir, the Writhing Township.

A 7/4 trample, haste that brings friends to the party whenever it attacks qualifies as scary. It'll cost

though, and a land.

Melded from two fallen angels, Brisela, Voice of Nightmares is full of abilities: flying, first strike, vigilance, lifelink, and a nifty spell-casting limitation for opponents. She also has the ability to make Sigarda weep. 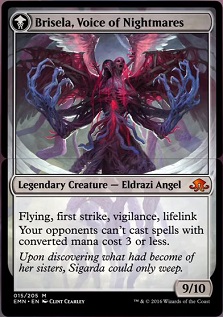 Eldritch Moon includes a 2/1 for 1 with no restrictions and upside, one of our first Eldrazi werewolves.

Kessig Prowler / Sinuous Predator joins a relatively exclusive list. There are only six other creatures in the history of Magic that meet those requirements. Only one other is Green.

Eldritch Moon has an Eldrazi tutor, Coax from the Blind Eternities, with a somewhat rare clause. The card allows the player to choose a card from outside the game. 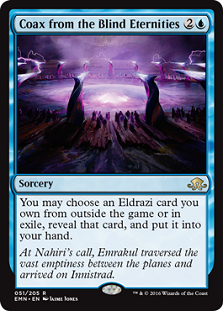 Only ten other cards include this clause, most of them are "wish" cards:

The Tree of Redemption has been corrupted! Cursed Eldraziâ.â.â.â 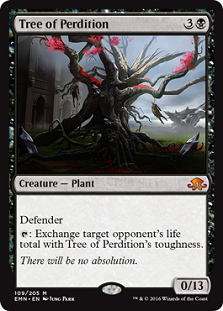 Now it's all about reducing your opponent's life total. Johnny's of the multiverse are plotting out just how to reduce Tree of Perdition's toughness below thirteen. Thirteen, thirteenâ.â.â.âfeels like I've been seeing that number around a lot lately.

Topping the preorder pricing list through week one of preview season is Gisela, the Broken Blade. This angel horror beats out both Emrakul and the first planeswalker previewed from the set, Tamiyo, Field Researcher. 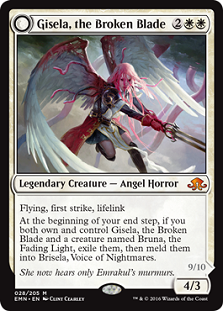 Soul Separator is a card with no room for awesome flavor text. It has but one ability, but a wordy ability it is. 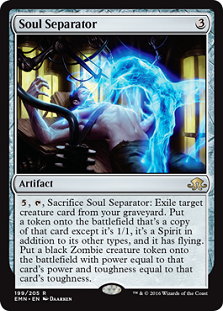