The Standard metagame has been competitive and healthy for three consecutive years. We've not seen a truly dominant deck in that time. Sure, there have been strong decks and some tournament favorites, but nothing compared to the white-and-blue one-two punch that dominated top tables earlier this decade.

Remember Caw-Blade? If you played or even followed competitive Magic during the Zendikar/Scars of Mirrodin metagame, the odds are good that you do. Caw-Blade was the very definition of a dominant deck. It was played by 25% to 35% of the field and had a win percentage above 60% in many major tournaments.

The deck became insufferable after the release of New Phyrexia and the immediate addition of Batterskull. Caw-Blade was everywhere for a couple months until Jace, the Mind Sculptor and Stoneforge Mystic were banned on July 1, 2011.

The arrival of Innistrad brought new toys in the form of Delver of Secrets, Geist of Saint Traft, and Snapcaster Mage. White-and-blue decks not only lived on, but were eventually fine-tuned into another dominant deck.

W/U Delver remained the deck-to-beat for most of Scars of Mirrodin/Innistrad Standard with no banning to provide a reprieve. The deck snapped up Restoration Angel from Avacyn Restored and grew even better. W/U Delver sat atop major tournaments as the deck to beat and completely dominated Magic Online with close to 50% of 4â0 decks from Daily Events near its peak.

W/U Delver was the last truly dominant deck in Standard.

Delver didn't survive rotation despite many of the key cards remaining available. Restoration Angel began a transition away from Delver of Secrets hijinks and toward the Flash archetype, which picked up game-breaking cards like Sphinx's Revelation and Supreme Verdict from Return to Ravnica.

There was a lot of fear Zombies would run rampant after rotation, but it took an eventual pairing with Thundermaw Hellkite for a B/R Zombie deck to gain any traction. Red, white, and blue decks of varying speedsâfrom control to tempoâfound success throughout the metagame, and Unburial Rites fueled Reanimator strategies. In the end, no single deck dominated the metagame. Jund Midrangeâfeaturing Thragtusk, Olivia Voldaren, and Huntmaster of the Fells supported by some effective removal and utility spellsâcame closest to dominance as measured by percentage share of the top finishes at Standard tournaments over the course of the year. 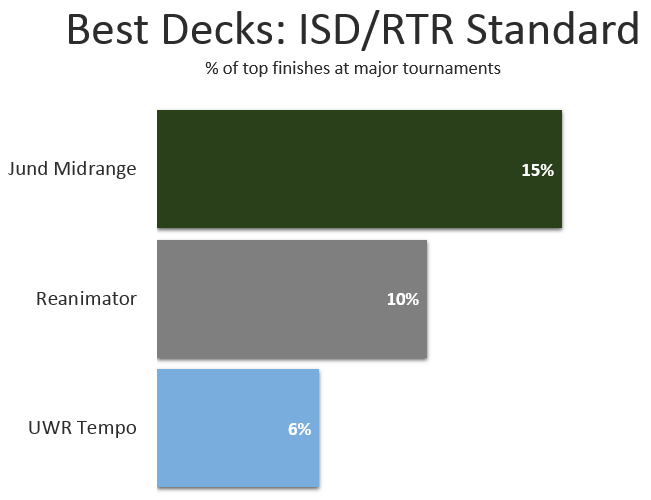 The Return to Ravnica/Theros metagame was also devoid of a dominant deck. Gods, and devotion to them, were a marquee part of the metagame. Mono-Black Devotion and Mono-Blue Devotion took turns at the top, but a slew of other strategies also found success, and no single deck owned the top tournaments. 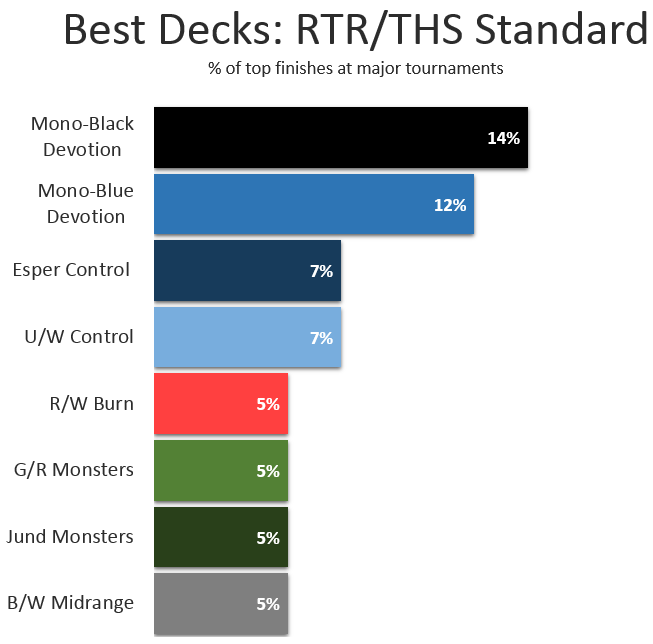 Our current Standard metagame has been all about the white, black, and green of Abzan. Aggro, midrange, and control decks sporting Abzan colors have all done well at different times. You could make a case that Abzan in aggregate is a dominant deck. Combined these decks represent 24% of the top finishes in major tournaments to date, and all three share key cards: Siege Rhino, Den Protector, Elspeth, Sun's Champion, and many removal cards. No single Abzan deck has been particularly dominant, however. Each represents a different speed of play adapted to the current metagame rather than completely dictating the metagame the way Caw-Blade and W/U Delver did. 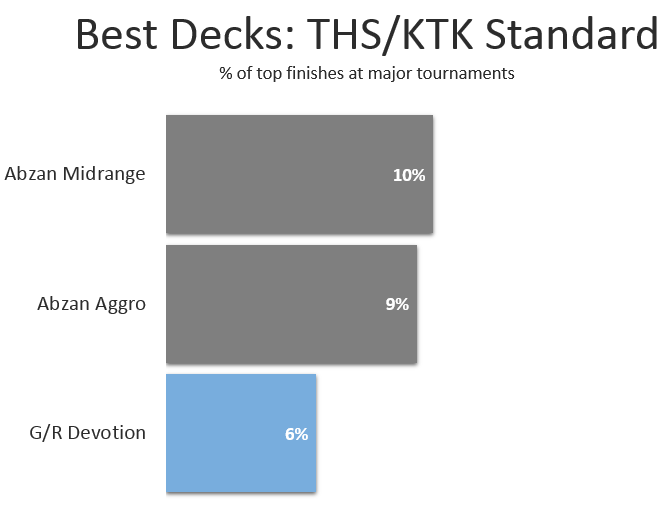 Jund Midrange, Mono-Black Devotion, and Abzan Midrange were all strong but not oppressive decks within their metagames. Years from now, the mention of them won't conjure the same types of memories or strength of reaction that Caw-Blade and W/U Delver do today.

Kudos to Wizards of the Coast for keeping things as competitive and healthy as possible for so long in a game in which players have near-perfect information.