Magic is a game of numbers: sixty cards, 20 life, draw two cards, take 7 damage, and add three counters. There are even more numbers surrounding the gameâfacts and figures, prices, and trivia, they are everywhere. In Affinity for Numbers, I uncover and highlight some of the more interesting numbers in Magic.

Commander (2015 Edition) will launch this month and bring with it the first ever Cat Illusion. Apparently it dines on violence, which I don't believe is gluten free. 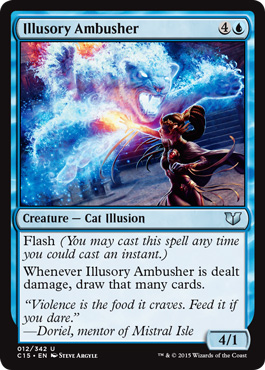 4 Copies of Part the Waterveil

Part the Waterveil is Standard-playableâat least in the Future Future League, where Wizards of the Coast tests possible decks for future Standard environments. Wizards was worried about the possibility of abusing extra turns, so they put together what they thought was the best possible deck to support the card. Will we see top players taking extra turns and awakening lands in a big-time tournament? Only the future will tell.

Burn rose to the top of Modern over Halloween weekend. Six of the Top 32 decks at StarCityGames Open Dallas and two of the Top 8 at Grand Prix Porto Alegre were Burn variants. Half played Naya colors to make use of Atarka's Command and Wild Nacatl, three were Boros, and one chose an Atarka Red strategy.

Craig Wescoe took a W/B aggro deck featuring four copies of Archangel of Tithes well into the Top 32 of Grand Prix Indianapolis. Wescoe seems to be the Archangel's biggest fan. Last summer, it headlined his Mono-White Devotion deck, and a very similar deck was piloted by Sam Black to a 4â0 finish in Standard and Top 4 overall in the last World Championships.

Battle for Zendikar is a big part of the Standard metagame, a quarter of it to be exact. 25% of the cards from top decks of major tournaments so far this year are from BFZ. Here's the full breakdown by set.

Does the influx of additional options in Battle for Zendikar make Allies playable in Modern? David Houghton sure thought so, and he took a Naya Allies deck to thirtieth place at StarCityGames Open Dallas.

Wizards of the Coast has announced an extension of the tour of most-beloved planes of Magic into 2016. We will go right from battling in Zendikar to figuring out what is casting Shadows over Innistrad (hi, Emrakul). The set will be out April 8, 2016 and will bring us nearly three hundred new cards. Innistrad in April feels odd. It's a shame they couldn't wait until next October.

Kabira Evangel saw a one-day price spike of nearly 400% between October 31 and November 1, settling at just under $6. The timing suggests quite a few people might agree that Allies are indeed Modern-playableâ.â.â.âor did on November 1â.â.â.âor just got caught up in some hype. The price has since dropped to $4.

We've reached the last month of the Magic Online Championship Series. Crywolf102190 leads the Player of the Year Constructed standings with 728 followed closely by Butakov with 701. The gap in Limited between first-place Phil_Ivey (807 points) and second-place pokerswizard (714) is much greater.

Battle for Zendikar has been out over a month, and new cards have been shipped to and fro as quickly as the world's postal services can manage. Fifteen of the top twenty most-traded cards on Puca Trade have been lands. At the top of the list with 1,158 trades is this full-art Island. 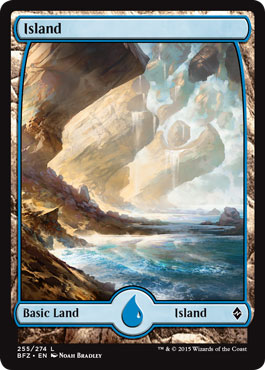 Thoseâre all the numbers I have for you today. If you also have an affinity for numbers and have one you think I should share, let me know on Twitter @MrVigabool.