Last week while talking about Guile, his theme, and my history with Street Fighter as a series, I discussed that I frankly wasn't a big fan of the series at the time. It was the kind of game I was too young to really get into and by the time I was old enough to appreciate it, it felt like it wasn't as prevalent of a series anymore. As a result, I never got much time with it until roughly the last year or so, playing Super Street Fighter II on my Sega Genesis and the various games on the Street Fighter Anniversary Collection on my Switch.

Despite the lack of overall knowledge of the series, there was one thing I was able to recognize well: the characters of Ryu and Ken.

For as little as I played or even looked at Street Fighter throughout the majority of the 90s, it was really hard to escape these two characters. They practically represented the series and were visible in numerous areas. If you saw Street Fighter in magazines, it was probably with one of these two characters. I remember checking out Marvel vs. Capcom and how prominently displayed both of them were. They were also the primary characters used in many of the various Newgrounds videos that defined the internet before the days of YouTube.

Ryu and Ken were basically meant to be mirrors of one another. This stems from the original Street Fighter, where you could play a one-on-one match with another human player - something fairly innovative at the time. While Street Fighter II would truly revolutionize this with its extensive character roster, in the original you could only really play as Ryu or Ken in that player-versus-player battle. As a result, they've always been pretty similar, being virtually color palette-swapped designs to one another with similar move sets.

Over the years, they may have developed to be more distinguishable from one another. As a longtime gamer, however, I remember them more as the mirrors for one another that played similarly, but not exact. And as such, I wanted to put together a deck that could represent either character while playing differently depending on who you used. Let's check it out:

While the deck uses Ryu, World Warrior here as the face card, the idea is that you can easily swap him with the copy of Ken, Burning Brawler that's in the 99. This gives you the ability to play with either or and see how they each work for you. When building the list, I admittedly worked off of Ken's ability initially by filling the deck with as many sorceries as I could. This not only gives Ken fuel for his side of things, but also gives you a ton of excellent fodder to pitch to Ryu's ability, meaning they work excellently regardless of which commander you use.

With the spells, I tried to find unique effects that could work well with Ken, but are generally good no matter how you play them. Extra combat phase effects like World at War, Seize the Day, and Relentless Assault felt like easy shoe-ins to get more battling happening. In the case of Ryu, this means more opportunities to activate his Hadoken ability. With Ken, it means you get to cast more free spells - which can even mean chaining more of these kinds of effects.

Beyond the spells, there's a couple of equipment effects to help benefit both commanders. Indestructible effects feel pretty important since you want to be attacking with both frequently, making Darksteel Plate and/or Shield of Kaldra must-haves. Basilisk Collar works great as well to make sure you kill creatures and has fantastic synergy with both commanders. A pair of swords in Sword of Fire and Ice and Sword of Truth and Justice either keep the card advantage flowing, or make sure that your creatures keep getting bigger and bigger.

Speaking of creatures, though, you may notice there aren't that many. As I filled the deck up with tons of spells and effects to focus primarily on the commanders, there didn't end up being very much space for actual creatures. A lot of the ones that did end up making it in generally do one of two things: get more value out of your instants and sorceries or buff up your commander. That said, there are a couple notable ways to make a bunch of tokens to help go wide so you're not overwhelmed by opponents quite so much. Increasing Devotion, Emeria's Call// Emeria, Shattered Skyclave, Sram's Expertise, and Castle Ardenvale all do a lot of work here but the real winner is Assemble the Legion, which will fill up your board fast in short order.

Oh, and of course, no deck built around Ryu and Ken would be the same without a Hadoken in it - regardless of how playable Lightning Bolt is or isn't in Commander. 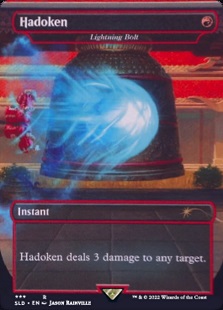 Ultimately, when it comes to video games, you'd be hard pressed to find characters more iconic than these two - especially in the world of fighting games. They're instantly recognizable and are so much fun to see and play with. As it happens, that's not just true for video games, but thankfully for Magic as well, and the Street Fighter characters feel oddly at home here. I love seeing these here, and if you're into the series or even otherwise, I highly recommend you give the deck a try at your next Commander night. And if you're feeling really frisky, try putting together two copies and pitting them against one another, just like you would in the arcades.