Commander Legends was a monumental undertaking of a set for Magic when it first came out at the tail end of 2020. The set featured a host of brand-new legendary creatures, new staples, and incredible reprints all for the Commander format. As it goes with supplemental sets, however, the set also had a tremendous impact on the Pauper format.

In case you weren't following the format at the time, Pauper gained en masse what Legacy and Vintage gained in small quantities: powerhouse staples. Legacy and Vintage mostly just got the likes of Hullbreacher, the Court cycle of enchantments and some needed reprints like Staff of Domination and Scroll Rack. Pauper, however, got much, much more.

Monarch was already a mechanic that provided some heated debate amongst many of the format's players. Many saw it as an oppressive mechanic that provided too much value and had the unfortunate issue of players being unable to interact with it outside of combat once it was active. This was bearable though aggravating when it was just Palace Sentinels and Thorn of the Black Rose, but Commander Legends brought with it a whole host. The mechanic, after all, works greatly with a multiplayer format like Commander where it might not be so great for 1v1 play.

The first notable inclusion here was reprints of the aforementioned Palace Sentinels and Thorn of the Black Rose. While both cards were fairly easy to come by in paper, they were fairly rare on Magic Online, and so their addition was welcome. The worry grew, however, when we saw Crimson Fleet Commodore, Staunch Throneguard, and especially Azure Fleet Admiral. Two of these slotted straight into Izzet Faeries - one of the top decks of the time and an archetype already saturated with card advantage. The other - Staunch Throneguard - seemed like a shoe-in for Tron, though this proved to not see much play at all unlike the others which saw a solid continual amount of play.

The real problem, however, was undoubtedly Fall from Favor. This gave monarch a removal spell. It was absurd, it was powerful, and it was banned within just a few months. Few things summed up how bad it was like seeing a board state involving creatures on both sides of the board with three copies of Fall from Favor on them, just to be able to steal away the crown from their opponents.

Thankfully the set had several other great cards to offer as well. Benevolent Blessing gave Heroic a better form of Cho-Manno's Blessing and Makeshift Munitions - while a bit of a late bloomer - provided excellent reach to several decks like Goblin Combo and Affinity. Fiery Cannonade also redefined the format's board wipes. Arguably one of the best additions, though, came in the form of cascade creatures like Boarding Party and Annoyed Altisaur. While all of the previous cards supplemented existing archetypes, these created new ones.

Suffice it to say: Commander Legends had a pretty big impact on the Pauper format. Today, I'm here to bring you two all new cards from the follow-up release of Commander Legends: Battle for Baldur's Gate! Neither of these cards is likely to break the format wide open, but they both look like excellent role-players for the format's various archetypes.

Without further ado, let's check out the first card, Greatsword of Tyr: 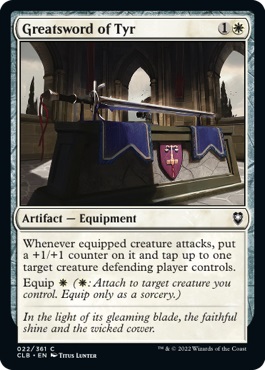 Greatsword of Tyr has the potential to be an excellent piece for various aggro decks within the format. It has a lot of things that line up really nicely, boasting a low mana cost and solid stat boosts. More importantly, though, is that it helps tap down problematic creatures every turn to allow your creatures to get in for damage. In other words, for a small investment you can get your creatures beefier with every passing turn and get more and more damage through as a result. If any deck makes good work of this card, it's likely to be White Weenies.

White Weenies is an archetype that's been a part of Magic since the game's early years. Players like Craig Wescoe and Cedric Phillips have been amongst the most well-known proponents of the deck in several formats. Naturally, it's also made its way into Pauper. Over the years, White Weenies hasn't been so great in Pauper, as it's frequently been overshadowed by obstacles and relegated to something of a tier 3 status.

Last year, however, that started to change. Several powerful new White commons made White Weenies start to look like a formidable deck to play with and against. Aided by cards like Cathar Commando and Search Party Captain, the deck finally started looking like a solid contender. While its meta share has dropped substantially over the last few months with other decks gaining a stronger footing, it still shows up from time to time. Here's a list that showed up just last week in the 5-0 league results for Magic Online:

The way the deck functions is quite simple. Play as many low-to-the-ground creatures as possible and beat your opponents' faces in. It's not much different from something like Stompy or Red Deck Wins, and it's gotten quite a bit before. As mentioned above, the deck recently got the likes of Cathar Commando and Search Party Captain, which gave it some real punch while also providing some additional utility and card draw. This has been amplified recently as well with cards like Spirited Companion and Inspiring Overseer. If Greatsword of Tyr were to show up anywhere, it's likely here in a deck where you play cheap and efficient threats, get your little creatures bigger, and look for additional ways to pummel your opponents.

The second and final card I have to show you all is another that may be fitting in White Weenies, but boasts additional utility as well. Meet Icewind Stalwart. 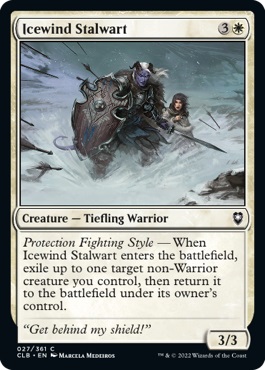 Icewind Stalwart is another flicker card, and longtime Pauper players know that flicker cards can be dangerous. In something like White Weenies or other aggressive strategies - like Boros, perhaps - this card can come down as a solid body for its cost and flicker another creature for value. With the number of newer creatures drawing you cards when they enter the battlefield, this can be extra card advantage on top of a solid body. Not only that, but it can effectively untap creatures that have already attacked, allowing you to keep up extra blockers.

I do think a card like this is a longshot for the White Weenies strategy outside maybe one or two copies on the top end, but that's largely due to its mana cost. White Weenies wants to play dirt cheap and efficient threats and run as few lands as possible. Running a 4-drop in the mix runs fairly counterintuitive to that idea. But that's not to say I don't think it can't find a home in Pauper, far from it in fact.

The reality is, it actually fits quite comfortably into a lot of Flicker decks that already exist. Not only is this a flicker effect on its own, but it can basically act as a second Mnemonic Wall or Archaeomancer for all intents and purposes. That is, you can use this and only one Mnemonic Wall in order to get back two spells a turn. That provides a lot of flexibility by enabling you to either get an additional effect from flickering something like a Mulldrifter or Stonehorn Dignitary, or you can use it essentially as a second Wall to get back tons of spells that allow you to control the game. Besides all that, it's a solid body with good stats. It's not perfect, but I definitely think this is a card with some legs.

What you get here are a couple of fine and welcome additions to the Pauper format. There's a lot of great cards coming up in Commander Legends: Battle for Baldur's Gate and we've still arguably got the best yet to come through the upcoming week. Next week, I'll be looking at them all in my big Pauper set review, but for now, I hope you enjoy these two cards. Both seem great in their own way and will no doubt show up in the format of commons.

I'd like to give an extra special thanks to Wizards of the Coast for providing these free previews. They're great additions; and, as a member of the Pauper Format Panel, I for one can't wait to see how they're used! Make sure you check out all the other great creators previewing their sweet cards and check out the CoolStuffInc Commander Legends: Battle for Baldur's Gate page to preorder some yourself.

Are you excited for these cards? If not, which ones that we've seen so far are you the most excited to play with and/or build around?