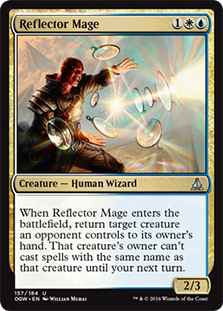 The spoilers that have been released so far have proven far more exciting than the leaked cards a few weeks ago. While there may be fewer bomb mythics and Expeditions to wait in wonder over, that does not mean there is nothing left to see. While I do want to focus on Standard and the coming release of Oath of the Gatewatch, I have also been looking for a way to fit a little more Modern in over the next month or so leading up to the Pro Tour. I have decided to split each week in half; that way, I can focus on spoilers as they release while not wearing out everything from the set, and at the same time, I can talk about some time-sensitive Modern information.

This week, since we have a ton of spoilers to go through, I am going to start there. Nothing so far has convinced me we are going to see a completely colorless deck, but we have seen some cards that will be forcing a rework of some existing mana bases. Until we have the whole set, I imagine any synergy strategies, such as Devoid or Allies, will be tough to pin down, but we can start looking at some of the cards that may make an impact on their own.

I have been really impressed with the quality of common and uncommon cards revealed so far, including my personal favorite: Reflector Mage. A Man-o'-War has always at least deserved a look, and this one comes with some added flavor. I am not sure the tempo deck exists to fully take advantage of a creature like this, but the extra toughness and additional perk of a momentary Meddling Mage is fairly relevant.

If I were looking to find a shell this could currently fit in, I would be looking toward Jeskai. I am not sure the need is there, but if the metagame were heavily focused on midrange, I could see a shell like this:

While I would also have a mana base worked out by time I start testing anything, I like to start my theory-crafting without concern for mana when the format is as abundant as it is. When looking at a three-colored deck, it is almost too easy to create a playable base, and while that is important eventually, it does not need to be the first priority. 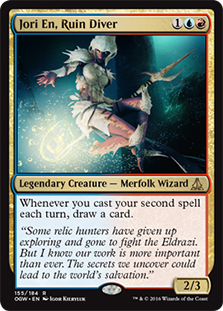 Jori En, Ruin Diver is probably going to do very little given how packed the 3-drop spot currently is in those colors, but I do want to test the card, and a tempo deck like this seems to be the most ideal place. It also plays well with another new card I am eager to test: Goblin Dark-Dwellers. Most people I have heard are dismissing this card, but I feel with the Charms currently in the format and cards such as Hordeling Outburst to further support the ability, this may be an ideal top end to the curve over something like Sarkhan, the Dragonspeaker that is more fragile. This allows you utility while also avoiding a singular removal spell if you have an Outburst in the grave.

The ramp decks will clearly be gaining a boost with the new Wrath variant they gain in the form of Kozilekâs Return, but I want to see a few more cards before I start trying to play with that archetype. You can easily just take the current shell and find room for the few cards we currently have, but I am hoping for another approach to ramp or some way to cheat these large creatures into play beyond See the Unwritten. That will probably be among the decks I focus on as Oath comes closer to being fully revealed but will shelve for now.

While I do have a number of other ideas for decks, most of themâwith only a third of the set revealedâare just current updated shells. If I am just updating existing decks, I will usually leave that for the entire reveal, and what other cards do interest me just do not have enough support yet, so this is where I will leave Standard for this week.

Modern has already seen some crazy price fluctuations as people begin to speculate on the state of the market. Some of these increases, such as Gaddock Teegâs, are probably going to drop back down almost immediately, as the market does not really seem to be sustainable at the current price tag of $50 or more. Other cards have begun to slowly creep up as the format becomes more and more relevant with the approaching Pro Tour next month.

Over the next few weeks, I want to stay away from the current market and instead look at the banned list of cards for any cards that may be wise to get in on now if any of them are unbanned. Some cards, such as Skullclamp, will probably never see Modern play, but there are some cards on the list people have been wondering about for a few months nowâStoneforge Mystic in particular. The announcement that it will be a coming promo does support that theory, as does the preemptive printing of Batterskull, the most obvious card that would probably rise.

Since Stoneforge Mystic is the most obvious of this class, I will start there this week while expanding to a few other cards I could see also receiving the same treatment. Wizards of the Coast has been in favor of mixing things up right before the Pro Tour for Modern, and it seems unlikely anything needs to be banned this time around unless it is part of the Amulet of Vigor deckâand even that will not really change much.

I donât know the control shells in Modern well enough to know exactly what the count is for some of the discard and removal spells, but this seems to be a fine place to begin looking at Stoneforge Mystic as an engine for early pressure that you can back up with counters, removal, and a few late-game finishers.

I would be curious to see if the new Stone Haven Outfitter becomes any better for Modern if Stoneforge Mystic does become unbanned, but truthfully, it is unlikely we will see a shell better than control for the white Tarmogoyf.

While I do agree with a great portion of this list, even as a combo player, I do see a few cards that are at least questionable at this point and may be worth taking a look at. Anything that facilitates a combo before turn four is probably never coming back unless we see a Force of Will reprint, so we can automatically cross those off the list. In addition, some cards are just too powerful, even for older formats, so they are probably far too good hereâSkullclamp, again, is the leading case in this category. That leaves us with the following list of cards that may be eligible outside of these two categories.

While some of these cards do push the envelope, I would not consider any of them unanswerableâexcept maybe Sensei's Divining Top. Preferably, they would just ban Counterbalance and put Top into play; this could help a great deal toward the struggling control shells, most of which currently need to look more midrange than anything to survive.

Five of the listed cards are lands thatâwhile they have left a bad taste years agoâmay not even be that broken in Modern, at least not in Affinity, which now runs so few cards with the actual mechanic that the extra artifacts really only fuel Arcbound Ravager a little further. With answers like Stony Silence in the format, these may have gone from busted to almost unplayable in most builds and probably could be removed at this point.

I don't want to go in depth too far this week, but this list is what I will be focusing on over the coming weeks, so if you see a card you would like discussed, let me know, and I will look at those first. That is all I have for this week; the holidays have me fairly busy, as I am sure they do all of you as well, so I have put away Magic Online for a few weeks to catch up on some work. But once the new set releases, I will be back in full force to figure out what new cards will be making a splash and what will quickly burn out.