Login
0 Item
Advanced Search
Sign In
Create Account
You've never seen Boris look so stumped before. "So what happens," he says slowly, "is that Old Fogey phases in during your untap step. That takes place before anything else."

"Then you get to the beginning of your upkeep," Boris continues. "That's when its Fading, Cumulative Upkeep, and Echo abilities all trigger, and you can stack them as you prefer. They all work independently of each other, so for example, you can resolve Fading first and remove a fade counter, then resolve Cumulative Upkeep to add an age counter and pay its cost, and finally resolve Echo and pay that cost."

"Except that the Echo cost doesn't have to be paid," Vern says.

"Yes it does," Boris says. "You say the Old Fogey entered the battlefield, then phased out during the next untap step. The main reason you're resolving all of its upkeep triggers now is because it's finally phasing in this turn."

"Yep, but Echo only triggers if it came under someone's control since the beginning of their last upkeep," Vern points out. "The problem here is that the Old Fogey came into play two turns ago. Which means that that Echo ability should have triggered last turn, but it was phased out then."

Boris stares at the 7/7 Dinosaur for a while, then throws up his hands in frustration. "Fine, fine," he grunts. "We'll play it that way. I guess you have a point."

"So I only have to handle the Fading and the Cumulative Upkeep abilities?" you ask.

"In the order that you choose," Boris says, getting up and walking off to the next table.

"Well, that was interesting," Vern says, laughing. "I haven't had a talk like that since I played a Mages' Contest during the Invasion prerelease."

"This thing came out during Unhinged, right? You'd think they'd have some rulings on Old Fogey already."

"Un-cards don't really go together with rulings, much less anything that got reprinted with Unsanctioned," Vern says. "Back in my day, we just read the cards and rolled with whatever they said."

"When you weren't calling out for a judge who was dressed in a donkey costume, you mean."

Vern chuckles. "The first one was a chicken costume," he says. "Besides, you're playing this game a little old-school yourself."

"An Adarkar Windform with only one snow-covered land?"

You shake your head. "I was going to play the Windform anyway, and I pulled a Snow-Covered Island from the draft, so..."

"Oh, I remember splashing a Fireball in a sixty-card Turbo-Stasis deck once," Vern says dreamily. "I only had one Mountain in there, because that was the time somebody swiped all my copies of City of Brass..."

"Well, you've obviously moved up on the mana front," you point out, "seeing that you just kicked Lightkeeper of Emeria for a boatload of life."

"That was a lucky Tormenting Voice," Vern says, nodding. "This Unabridged Cube does get entertaining, I'll give it that. Wonder where they managed to get one of each card ever printed?"

You pull what's probably the best card in your deck - an Oko, Thief of Crowns - during your draw step, and smile. "What's your life total, Vern?" you ask.

"Twelve," Vern says. "Are you going to somehow get through nine blockers and that much life to take this game?" he asks.

It is the start of your first main phase. Defeat Vern before the beginning of his next combat phase. 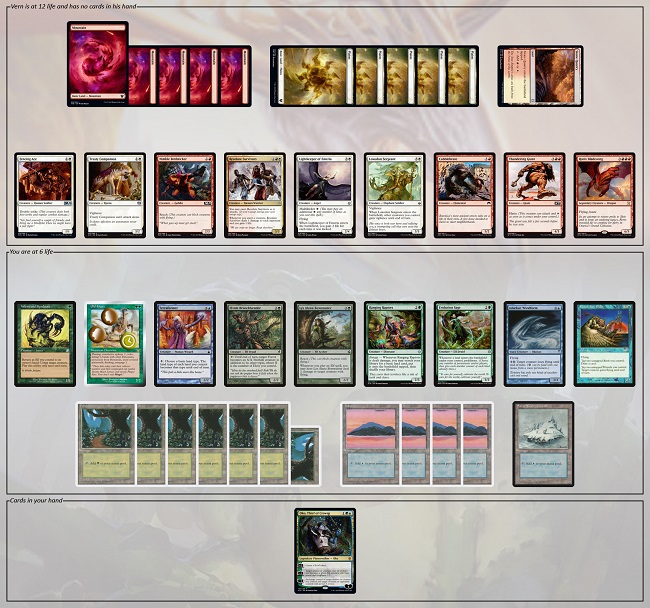 You have not yet played a land this turn. You still have a substantial number of cards remaining in your library (including a number of basic Forests and Islands), but you know neither the identities nor the order of those cards.

Vern is at 12 life and has no cards in his hand. He has the following cards in play:

Instead, if you think you've got a great solution, you can send your solution to puzzles@gatheringmagic.com with the subject line "Puzzle - Newfangled Things" by 11:59 P.M. EST on Monday, February 24, 2020. We'll include the best ones in next week's article along with the next puzzle!

"It's funny that the Call to the Netherworld was completely irrelevant to this solution," Max Bernstein writes, "despite implying much more focused graveyard shenanigans."

You indeed have a lot of mana at your disposal here, which is enough to fuel multiple activations of two specific cards on your side of the table: Rats of Rath and Nezumi Graverobber (both sides). This abundance of resources makes things easier: If there was any complicating factor, it was with the number of options you had available.

"There were a lot of red herrings in this puzzle," Jonah Comstock writes. "I spent some time trying to figure out how many times I could re-use Disease Carriers to take out their board, for example." In the end, though, Jonah puts the following solution together:

"Since we have one extra mana," Jonah adds, "the first step could be replaced by simply activating the Graverobber an extra time."

That said, there's a way to get to both threshold and the win at the same time, although it involves wasting the +2/+0 bonus on Supernatural Stamina. Max Bernstein elaborates on this approach:

Again, however, this ignores the Call to the Netherworld in your hand... although you can activate Dirty Wererat and discard the Call instead of performing that one final Rats of Rath activation.

"Also of note," Andrew Mackinder points out, "Piper tapped her Apostle of Purifying Light unnecessarily, since she controls an Akroma's Devoted." Perhaps it was because, having played Mari before, she might have been silently expecting some underhanded play. After all, with your experience finding subtle paths to a win, she may simply have smelled a rat.