You'd have liked to say that your first Masters 25 draft was interesting, something that involved difficult opponents and games that went down to the wire. In truth, however, you drafted three Horseshoe Crabs, a Quicksilver Dagger and a Heavy Arbalest, then cruised to a result of 2-1 (losing to someone who always seemed to have a Murder when she needed it).

You're removing the sleeves from your deck when Mari runs up. At first you think she's about to tell you a story about how she managed to set up her most recent win, but what she has to say is a lot more unexpected.

You pause for a moment, then quickly gather up your cards and follow her.

Unfortunately, CJ's signing his match slip by the time you arrive at his table. "Show's over," he says. "Thanks, dude. I guess I just couldn't hold out till the end of the night."

"My pleasure," his opponent says.

"Well, yeah," CJ says. "Hiro here had double my creature count, and I wasn't drawing anything new. He was also at 14 life, and it wasn't as though I was going to fight those rising odds."

You glance at the cards on the table. "Is this what the board looked like when you finished your game?" you ask. "Did you remove any cards?"

"You and Mari are going to do that thing where you look over my game, and she's going to instantly know that I could have won it if I had played that card *this* way and this card *that* way. And you're going to take like, fifteen minutes to figure it out, and then you're going to agree with her."

"I just signed this thing off," CJ says. "If there's a way I could have won this, I don't want to know about it!"

"Could you at least answer one question, CJ?" you ask.

CJ shrugs. "Sure, whatever."

"You conceded during your turn, right? Your lands are untapped."

You turn over the two face-down cards that probably were in his card at the point of concession. "And you just drew the Retraction Helix to go with your Act of Heroism?"

"That's two questions," CJ points out. "Besides, the Helix isn't really removal, and I thought it would only delay the inevitable."

Mari shakes her head. "One of these days, CJ," she says, "you and I are going to have a long talk."

It is the start of your first main phase. Defeat Hiro before the beginning of his next combat phase. 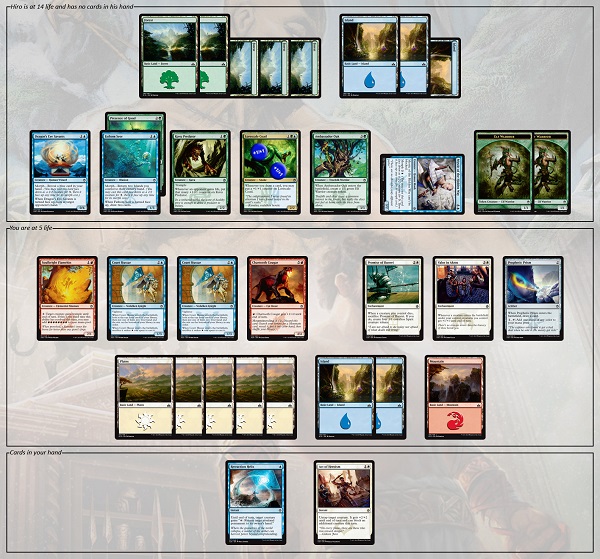 Hiro is at 14 life and has no cards in his hand. He has the following cards in play:

If you think you've got a great solution in mind, don't put it in the comments! Instead, send it to puzzles@gatheringmagic.com with the subject line "Puzzle -- Fresh from the Fight" by 11:59 P.M. EST on Sunday, March25, 2018. We'll include the best ones in next week's article along with the next puzzle!

Correct solutions to last week's puzzle were received from Russell Jones, Ryou Niji, Greg Dreher, Enrique Cordero, Subrata Sircar, Chris Billard, Michael Feldman, and David Arnold. Russell Jones in particular provided some very comprehensive notes about mana distribution and the Desert that originally broke this puzzle, which we'll get to in a while.

"One glance at the board will tell us that we need to win mostly through Faith of the Devoted and not combat," Subrata Sircar remarks."That in turn will require a lot of mana and cards. Fortunately, between the Apprentice Wizard and the Dreadship Reef, we have lots of mana."

"We have the good sense to enchant our own creature with Immobilizing Ink to make a discard outlet," Ryou Niji notes, "and it's one that can really use the untap effect, too. There is also the fact that Arcane Denial is positive card advantage when we use it as 'counter a spell you control: draw three cards'. Unfortunately, we can't afford to counter Slip Through Space (since we need the unblockable damage)."

As a result, much of the puzzle involves getting a known card into your hand and recasting it so that you can use Arcane Denial. David Arnold writes:

The original version of this puzzle had a Desert on Tami's side, which inadvertently made this solution unworkable. This was because you have certain restrictions on what abilities you can activate at which times. You need:

The Dreadship Reef, however, counts for a one-time infusion of 5 mana, which will empty from your pool at the end of each step and phase.

The only place where you can use the 5 mana from Dreadship Reef is during your post combat main phase. If Tami had a Desert on her side, however, she could easily deal 1 damage to the 3/1 Umara Entangler and kill it before this second main phase begins.

"On the surface," Michael Feldman notes, "the puzzle's title could refer to Arcane Denial, but it could also refer to the unusual amount of cards that would seem to be a big deal but don't really matter in the end: