Login
0 Item
Advanced Search
Sign In
Create Account
Now that you're in the middle of your first game, you can see the problem behind any Crap Cube: It's extremely easy to throw together a random collection of bad cards with little or no synergy, then ship it off to your local game store for eight unsuspecting people (including you) to play-test.

To be fair, the cards in this particular Cube aren't so bad: Whoever designed this had a mind to include some workable removal, evasion, and substance in the mix. However, they still have a long way to go before you can see this collection of cards as anything but a novelty.

As you're pondering all this, you're also seriously regretting placing too much of an emphasis on Green - the result of starting your picks with a Feral Krushok and a Scaled Wurm. Fortunately, your first-round opponent also seems to have gone mono-color... except that Patrick has a Black deck, and it's far more flexible than yours. On top of that, he seems to have pulled the perfect attacker to deal with your mono-Green abomination.

"I'll attack with my Dunerider Outlaw," Patrick says, tapping it.

"You're lucky that that has Protection from Green," you grumble.

"I admit I'm not complaining," he says, his eyes smiling. "Take three?"

"Down to four life," you say, scratching out your new life total on your scorepad while Patrick gives the Outlaw another +1/+1 counter.

You can see why Patrick's playing mono-Black: He's running an Urborg Stalker and a Grave Peril, and the willingness to stick to a single color has resulted in some benefits. For one, the Black enchantment isn't letting you play any new creatures (not that you've drawn any recently), and it's preventing you from activating your Giant Caterpillar for a 1/1 flyer. The only nonblack permanent you've seen from him so far has been a Mana Matrix... and even then Patrick cast a Deathlace on it a number of turns ago.

The sad part, really, is that you were doing so well in the early parts of this game, before Patrick dropped a Mer-Ek Nightblade and built up a small wall of deathtouch blockers. Your opponent is currently down to 2 life, and you haven't been able to do anything but sit back and wait for him to make a mistake.

"I'll cast an Anointed Deacon," Patrick says, tapping five Swamps. Idly, you wonder if that means if he has any other Vampires in his deck.

Patrick gives his enchantment another look. "No," he says, "it only triggers for nonblack creatures."

You untap your permanents. "I'll take one more damage from the Stalker," you say, adjusting your life total once more and glancing at the Contaminated Bond on your Beacon Behemoth. Being at 3 life isn't a good sign, especially when you know that your opponent can cruise to victory on the back of his Dunerider Outlaw next turn.

You peel a card off the top of your library, hoping for some removal (even though you don't think you have anything that can get past a Protection-from-Green ability). Unfortunately, all you get is a Phytoburst, and you're not sure how that's supposed to help.

It's frustrating to have your opponent at a low life total, yet still be unable to do something about it. There's got to be a way you can break through here... and you somehow have to find it with the sub-optimal cards at your disposal.

It is the start of your first main phase. Defeat Patrick before the beginning of his next combat phase. 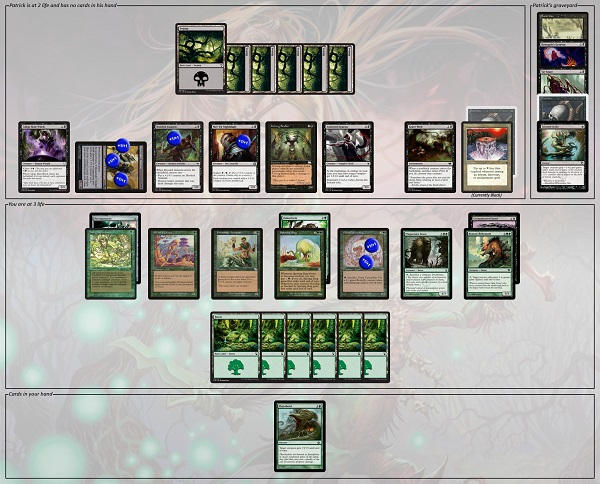 Patrick is at 2 life and has no cards in his hand. He has the following cards in play:

Patrick has the following cards in his graveyard:

If you think you've got a great solution in mind, don't put it in the comments! Instead, send it to puzzles@gatheringmagic.com with the subject line "Puzzle - It's Not Easy Being Green" by 11:59 P.M. EST on Monday, March 25, 2019. We'll include the best ones in next week's article along with the next puzzle!

"Despite half a dozen legendary doppelgängers on the field," Matt Bocek writes, "this solution is conceptually straightforward. The exact details of how it plays out, however, sent me running to look up detail on Heroic abilities, the stack, and state-based actions.

"As observed in the prompt, your creatures (and, by extension, your opponent's clones) are not strong. The only creature on either side of the field with much value to you is the Artisan of Forms, because instead of being one underwhelming creature, it can be all of them. You don't have a sacrifice outlet for your unwanted creatures, so Artisan of Forms and the 'legend rule' have to do the dirty work for you."

"My guess is that the Leyline of Singularity was from before the legend rule change," Ryou Niji muses. "4-mana hard removal spells in Blue are not that bad, especially since they get around hexproof and things. Interestingly, another way it could make sense is if your creatures want to die more than they want to stay on the battlefield. This is exactly our situation, and the newly-drawn Lava Dart actually allows us to join the copying fun."

There are two variations to a solution here, but both need to play around one visible trap. CatTribal writes:

While you can easily build a four-power Black creature with Spinal Centipede, you need to take a detour first and copy Polluted Dead to remove your opponent's Quicksand. You'll want to keep the actual Spinal Centipede and not the Artisan of Forms copy, of course, because the Artisan will still have your Despondency attached.

It's also worth noting that the current 'legend rule' doesn't actually force you to sacrifice anything. Having two or more legendary permanents with the same name just causes you to put one of them into the graveyard... but that action still results in a death trigger from the creature involved.

"If Spinal Centipede had some sort of Pacifism effect on it," Russell Jones notes, "that could have forced the second 'legend rule' choice to go the other way, which would have required temporarily becoming a copy of Cemetery Gate to be able to ditch the Despondency and get it back for another trigger."

This brings us to a slightly longer solution, but one which allows Artisan of Forms to deal the final blow. Sean Patrick Keatley writes:

That said, the presence of a Pacifism effect in a Clone deck seems doubtful. "How much pacifism can there really be," Russell observes, "with Renata and Raffaela probably being a real handful all the time?"