Login
0 Item
Advanced Search
Sign In
Create Account
"I'll pay the embalm cost of my Vizier of Many Faces," Cecile says, putting a token into play. "I'll have it copy your Skyraker Giant."

You frown a little, but nod anyway.

Your fingers tighten slightly on the Dash Hopes in your hand.

Cecile finally draws her card, and shrugs. It turns out to be a Transguild Promenade, which she plays immediately afterward, tapping a Plains for its enters-the-battlefield ability.

You visibly deflate, arms turning to rubber from behind your side of the table. Cecile watches you with interest.

"It's almost as though you want me to cast a spell," she observes.

"You could say that," you sigh.

Cecile shrugs again, then turns her Clone sideways. "I'll attack with just this one," she says. "Don't forget that it's copying your Pardic Dragon."

You know you don't have a lot of choice at this point: You're at 4 life, and you're playing a deck of random cards from your local game store's bargain box. You've also got only one possible blocker for the Dragon, and you need to throw it in the way.

"I guess I'm blocking with the Skyraker Giant," you say.

Cecile drops her Clone into her graveyard, while you put the Giant into yours and move its Executioner's Hood off to the side. You take the time to go over her board again, trying to remember which cards are supposed to be which. You should have taken better notes, you suppose.

"Could you remind me what those two Body Doubles are for?" you ask.

Cecile points at one of them, then at the other. "This one is the Flametongue Kavu that took down your actual Pardic Dragon," she says. "And this one's the Pith Driller that put a -1/-1 counter on your Polluted Dead."

"I remember that the Stunt Double is a Wall of Razors," you add, thinking about a particularly bad block several turns ago, "and that the Artisan of Forms copied my Feral Abomination before you cast that Path of Exile. What was the last thing your Cryptoplasm copied, though?"

"I think it was your Vexing Devil," Cecile says. "It's your turn, by the way."

"I'll assume it was the Devil, then. Why are you playing with a deck full of clone effects, again?"

"The twins found out I was passing by this weekend, so they lent me a deck. This is probably their idea of amusement."

"I was wondering that. The Leyline of Singularity isn't a good fit, though."

"I think they put it in here to make things harder. I'm surprised you're not playing one of your other decks, though."

"I didn't bring any today," you explain. "Besides, the best defense against a clone deck is probably a deck with a lot of terrible creatures."

"Don't let the twins hear you say that, or else they'll make me play something even worse."

You draw a Lava Dart to go with the Dash Hopes gathering dust in your hand. "We're both at four life," you say, "I'm playing a bunch of mismatched cards, and your board is getting more complicated by the second. What could be worse than this?"

"You would win with whatever you've got stuck in your hand?" Cecile laughs.

Your ears prick up, and you start inspecting the cards on the table.

"I wasn't being serious," Cecile says, now with a slightly worried tone.

It is the start of your first main phase. Defeat Cecile before the beginning of her next combat phase. 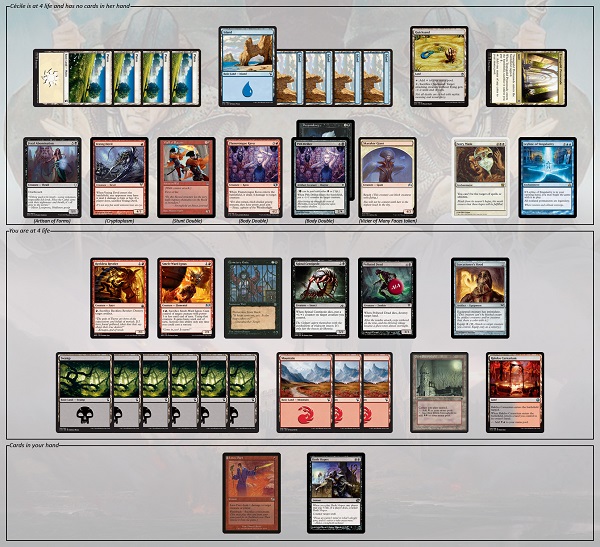 Cecile is at 4 life and has no cards in her hand. She has the following cards in play:

If you think you've got a great solution in mind, don't put it in the comments! Instead, send it to puzzles@gatheringmagic.com with the subject line "Puzzle - Copy That" by 11:59 P.M. EST on Monday, March 18, 2019. We'll include the best ones in next week's article along with the next puzzle!

"This is a fun one," Addison Fox writes. "The text on Approach of the Second Sun is a little oddball: It doesn't care whether the first Approach resolved, or if it's the same copy of the card or anything, just that we tried to cast it at least one previous time this game. Additionally, it only cares if you cast it from your hand when it's the game-winning copy; the previous copies can be from wherever you want."

"Despite CJ's deck-building goals," Ryou Niji continues, "this deck isn't really that good at generating a large amount of mana, not when 'large' means '14 mana, plus whatever it takes to dig seven deep'.

"Instead, the plan is to first cast Approach of the Second Sun for free with Etali, then cast it the second time with Twinning Glass. At first glance it seems that at least the 'dig seven deep' part of the plan remains the same - and Skullclamp and Faithless Looting give us the draw power to do so. However, to win with 100% certainty, we must find another path for Approach to get back into our hand."

While it's also possible for you to free Boris' Chittering Rats by sacrificing your Felidar Cub to get rid of the Silkwrap, you really need to get rid of his Ruin Rat. Otherwise he can declare it as a blocker for your Etali, then use it to exile Approach of the Second Sun from your graveyard before your second main phase!

Several people also wrote in to suggest an alternative solution which, while workable, comes with a catch. In addition to the solution above, Kirk Maijala also pointed out that you can do the following:

With this solution, however, Boris also draws a card from Soaring Show-Off... which opens you to a very well-timed counterspell effect. While that may or may not be possible, you probably don't want to risk this against a constructed

"Mazel Tov on a puzzle well done," Michael Feldman writes. "If I Were a Rich Man, I'd buy more than one Approach of the Second Sun. Then I wouldn't have to cast the same card twice. Casting it would just be Tradition."