Your opponent, Grant, doesn't say anything. He's obviously not the chatty type, but part of you thinks that you might have turned him off with all your talk of how your local game store's Unabridged Cube has a mind of its own. However, you can't think of any other explanation of why things are what they are right now.

You're currently stuck in the middle of a stalemate, but that's not the important thing. What's remarkable is that you've ended up with a couple of creatures-turned-planeswalkers once again (or at least, they can potentially turn into planeswalkers). That puts you in the same situation as your last two drafts, and you have no idea why.

At some point, you probably have to admit that it has something to do with War of the Spark. The Unabridged Cube contains one of each card ever printed, so it's reasonable to assume that it can give you a Nissa, Vastwood Seer and a Nicol Bolas, the Ravager immediately after giving you versions of Jace, Liliana, Gideon and Chandra over the past few weekends. Some small part of you still wishes that you got a preview card from the Cube, though.

Grant angles his card to show you. It's an Oyobi, Who Split the Heavens - something that you've barely seen before. You can only assume that your opponent meant for it to work with his Will-o'-the-Wisp, or maybe he's packing some other Spirit or Arcane spells. Otherwise a 3/6 flyer isn't a really good deal for seven mana.

Then again, you have a Spitting Spider in play, and Oyobi's high toughness is bad for you; you'd rather not blow up your lands just to cleanse the board of flyers. Grant's already done his fair share of that, using a Demonic Hordes to wipe out your two splash colors before you were able to draw a Time to Feed to go with your Uktabi Efreet. You still have enough land to work with at this point - just not enough to transform Nicol Bolas into the flying instrument of destruction he wants to be.

"Your turn," Grant says. He sounds bored, and you wouldn't be surprised if he was.

Oddly, your draw for the turn might actually be useful: It's a City of Brass, which you originally intended to use for a bit of color-fixing. You're even at a decent enough life total to be able to use the City once or twice.

The problem, of course, lies in what to use it for. You've had enough trouble holding a Gift of Tusks in your hand for the longest time; the cruel reality is that neither you or your opponent is willing to attack through a gummed-up board.

You have to admit that that's a lot of life to consider, perhaps even beyond your reach. But you've been in worse situations before, and that hasn't stopped you from finding a win where no one else could. That, in fact, shouldn't be something that stops you now.

It is the start of your first main phase. Defeat Grant before the beginning of his next combat phase. 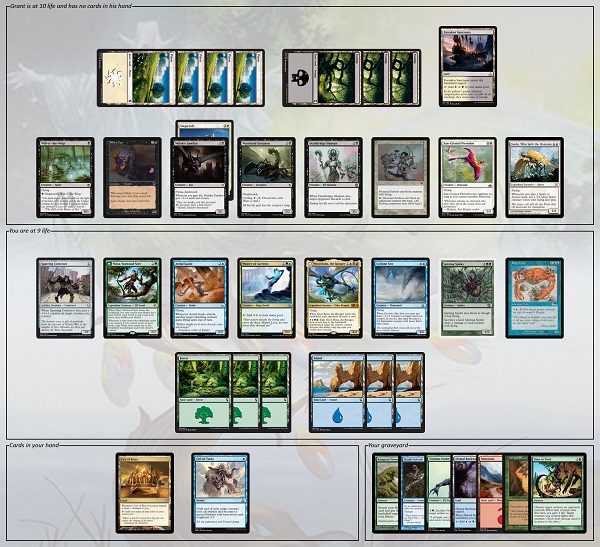 Grant is at 10 life and has no cards in his hand. He has the following cards in play:

Grant currently has no relevant cards in his graveyard.

If you think you've got a great solution in mind, don't put it in the comments! Instead, send it to puzzles@gatheringmagic.com with the subject line "Puzzle - The Brass Ring" by 11:59 P.M. EST on Monday, May 6, 2019. Sean's out of town right now, so the solution to this puzzle will be posted in a couple of weeks once he gets back!