Login
0 Item
Advanced Search
Sign In
Create Account
"So I guess what I'm saying is, I liked the second movie better. Especially the kid; the kid was classic."

"We can agree to disagree," Julian says. "I'll draw a card with my Benalish Heralds."

"Sorry, could you say that again?"

Julian finishes tapping his fourth land. "What I said was, I'll activate my Benalish Heralds to draw a card."

"I've still got some more mana and a good amount of life. I can risk it."

Julian peels off the top card of his library and adds it to his hand. "I'll tap two and cast Ordeal of Heliod on my Silent Observer," he says.

"Now I'll attack with my three flyers," he continues. "Silent Observer, Concordia Pegasus, and Precinct Captain. Ordeal of Heliod triggers, and I'll put a +1/+1 counter on the Observer."

"Sure," you say. Julian attached an Arcane Flight to his Precinct Captain a few turns ago, and it's been super effective. That's one of the things you like and dislike about the Unabridged Cube at the same time: With one of each card ever printed, it's prone to some very interesting interactions every now and then.

That said, this interesting interaction's likely to be the death of you, considering that the Precinct Captain's allowing Julian to slowly build a regiment of Soldier tokens. Your life total has been steadily dropping as Julian adds more flyers to his army; it'll only be a matter of time before he overruns you.

"I'll block your Precinct Captain with my Foundry Screecher," you say.

"Anything to stop me from getting another token," Julian remarks.

"That puts me at seven life," you say, scribbling on your scorepad. "This is not exactly the game I expected to have."

"It's not like you could find the biggest guy in your deck and run him out," Julian murmurs. "You know what I'm saying?"

You spare a glance at the Vendetta in your hand. You're loathe to cast it because of the life loss effect, which would put you in a bad spot right now. One option is to aim it at your own Stigma Lasher to trigger your Livewire Lash and possibly minimize the damage Julian is doing... but that'll mean losing the Lasher itself.

Julian casts the last card in his hand - a Blinking Spirit - during his postcombat main phase, then passes the turn. You find yourself trying to remember if you have any cards in your deck that can save you now.

You move to your draw step and draw a card, finding that it's a Fists of Flame - one of two Modern Horizons cards gifted to you by the Unabridged Cube. You're not sure how it complements the Goblin Engineer you already have in play, but at least it's nice to have the opportunity to take the new cards out for a spin.

"It's your turn," Julian says.

"That's okay. Can you give me a few minutes?"

Julian gives you an odd look. "What, do you need to go to the bathroom or something?"

It is the start of your first main phase. Defeat Julian before the beginning of his next combat phase. 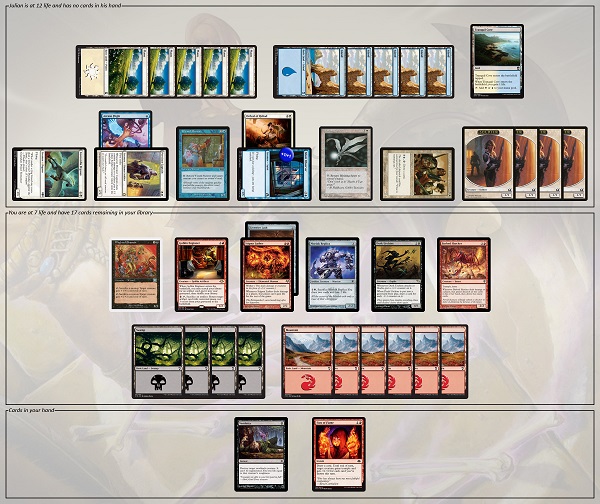 You have not yet played a land this turn. Considering that you've already taken your draw this turn, you have exactly 17 cards remaining in your library. However, you know neither the identities nor the order of those cards.

You currently have no relevant cards in your graveyard - Julian used a Stonecloaker to exile the Explosive Apparatus that you originally searched out with your Goblin Engineer.

Julian is at 12 life and has no cards in his hand. He has the following cards in play:

If you think you've got a great solution in mind, don't put it in the comments! Instead, send it to puzzles@gatheringmagic.com with the subject line "Puzzle - That Burning Sensation" by 11:59 P.M. EST on Monday, June3, 2019. We'll include the best ones in next week's article along with the next puzzle!

"This is a goodie," Addison Fox writes. "Not every board state out of the Unabridged Cube contains an infinite loop, but some do, and sniffing it out is the key here.

"Zila has too much life and too many blockers to get in with a creature in combat, but we have a damage source: Krovikan Whispers nugs you for 2 for every turn you've had it when you choose to stop paying the cumulative upkeep. Thanks to a little Magic called proliferation, we can wind that clock like it's daylight savings until Zila's head spins."

The actual combo itself has a number of redundant pieces scattered all over the board. Abe Golden's solution lays out one way to go infinite:

Other approaches are possible. You could, for example, keep replaying either your Gruul Turf or Selesnya Sanctuary (or both!) - allowing them to bounce back to your hand from their own triggers. Between Druids' Repository, Evolution Sage, and a single attacking creature, you'll still have a good supply of mana for Ulasht, the Hate Seed.

Interestingly enough, it's possible to win this one without using an infinite combo. Hyman Rosen's solution points out that technically, all you need to do is make sure that Krovikan Whispers ends up with at least ten age counters on it:

Running the above sequence a tenth time, of course, will deal a fifth point of damage to Cacophodon, which would put it into your graveyard and prevent any further infinite interactions.

So it turns out that you can eke out a victory against a set of giant monsters. Plus, on top of all that, you get your Godsire back. "I think Godsire got really angry," Russell Jones muses, "and you won't like him when he's angry."