All things considered, youâve been doing quite well. The colors of your Magic Origins Sealed deck were all over the place, and itâs a miracle that you made it as far as you did. Given the circumstances, however, your luck has just about reached its breaking point.

You and Valerie have been in stalemate for most of this game. However, that balance ended a couple of turns ago when Valerie planted a Knightly Valor on her Charging Griffin, bringing you to a precarious 1 life after several attacks.

Fortunately, your top-deck last turn was merciful: You drew and cast a Revenant, and even if itâs a 4/4 creature, itâs still a flyer that can block the Griffin and buy you one more turn. If youâre lucky, Valerie might even attack with just the Griffin on her turn and walk into your Celestial Flare; even if she doesnât, however, you still have a Touch of Moonglove to make sure that her flyer is permanently grounded.

Valerie takes her turn, and, to your horror, reveals that sheâs top-decked something, too: Joraga Invocation, which she casts for a blanket +3/+3 bonus to all of her creatures.

Suddenly, your struggle to stay alive has become a lot more complicated.

You hold up a hand, signaling to her that youâre thinking about your next move. You might have more creatures on the table right now, but Valerieâs attackers are far bigger than yours; even if you survive the turn, youâre not going to be able to survive a second attack. Your only recourse is to end the game before Valerieâs creatures can regroupâ.â.â.âbut would that even be possible? 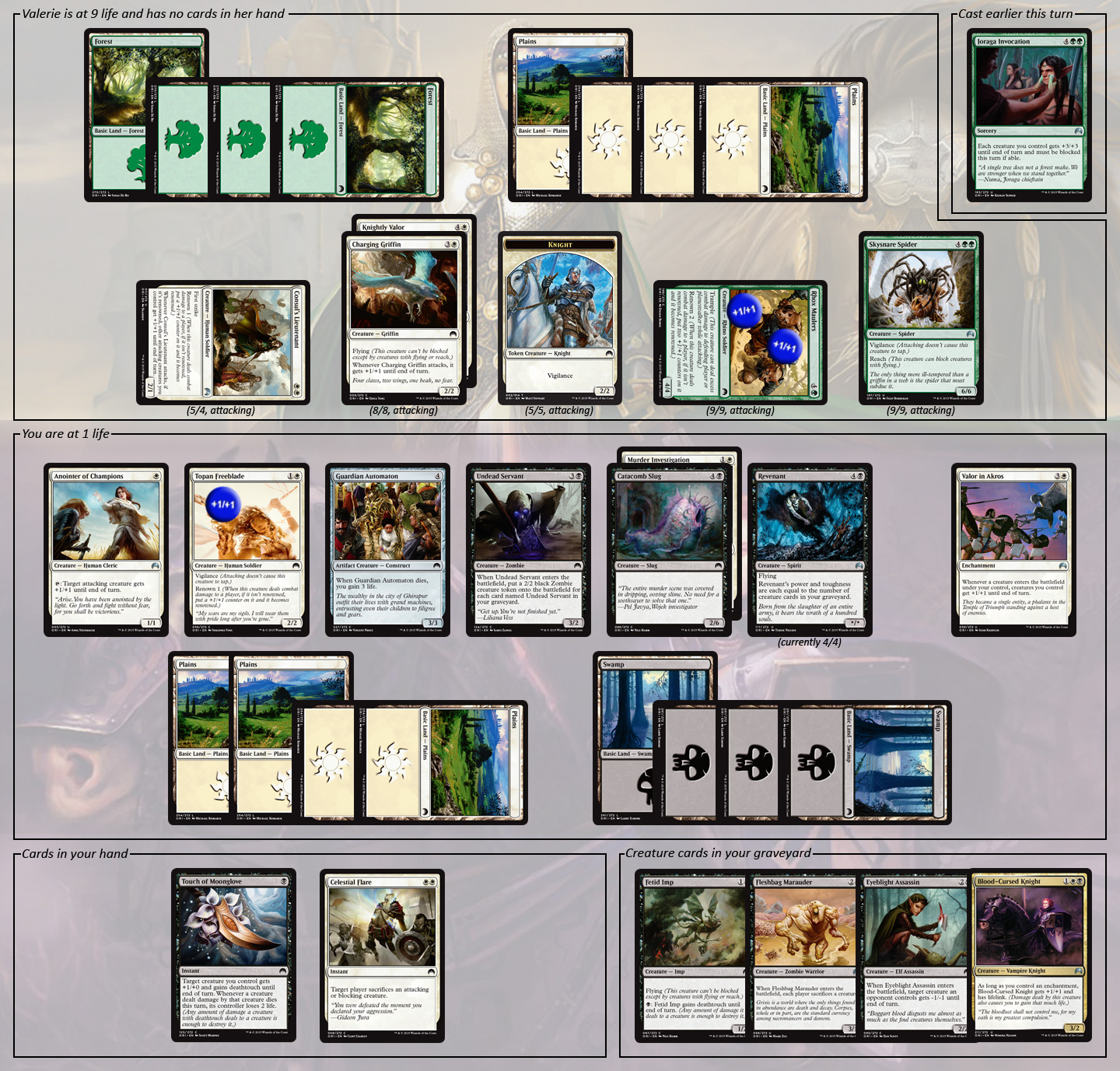 Valerie has declared her attack and assigned all of her creatures as attackers. You may still cast spells or activate abilities before you declare blockers.

You are at 1 life with the following cards in play:

You do not know the identity of any of the cards that are currently on top of your library.

Valerie is at 9 life and has no cards in her hand. She has the following cards in play:

Valerie cast Joraga Invocation during her first main phase, which means that each of her creatures has +3/+3 until the end of her turn and must be blocked this turn if able.

If you think you have a great solution in mind, donât put it in the comments! Instead, send it to puzzles at gatheringmagic dot com with the subject line âPuzzle â Stand Against the Wavesâ. Weâll include the best ones in next weekâs article along with the next puzzle!

Chris McCormick managed to sum up the solution in a single sentence:

Cast Might before combat on the Sergeant after you make him unblockable, attack, and then Reclaim that Might for enough damage to win.

Thereâs more to it, of course. âThe keys here are understanding first strike priority and sequencing your spells to take advantage of Valeron Wardens's triggered ability,â Christian explains. This allows Reclaim to play a significant role in the solution.

âThe triggered ability of the Wardens will allow us to draw a card after the Akroan Sergeant deals first strike damage to the opponent,â Eric writes. âBut with this in mind, our first step is to make the Sergeant unblockable.â

âI was blown out by Might of the Masses twice at the prerelease,â Ben muses, âso I figured this one out rather quickly.â

Ben notes that you would probably want to call a judge though: Itâs not a well-known rule that you can cast spells between first strike damage and normal damage. But it does work, and it works to your advantage in this case.

Several people provided some good insights on the possible targets for Reclaim, and more than a few choice words were written about Titanic Growth. âTitanic Growth is clearly the best option [out of the four original cards in our graveyard],â Andrew writes, âand it fits our available mana just rightâ.â.â.âbut we can deal only 12 total damage with it! No matter what we do, we're 1 damage short if we return Titanic Growth.â