Login
0 Item
Advanced Search
Sign In
Create Account
Your opponent, Nikola, keeps apologizing for his deck. That's usually your first clue that you're in for an interesting ride.

After an unremarkable first game marked only by Nikola using Archaeomancer to return a Brainstorm to his hand (and not finding anything worthwhile on its second casting), you adjourned to the second game of your match. That, however, is when Nikola's deck got nasty.

It turns out that Nikola managed to draft one of the preview Guilds of Ravnica cards that somehow turn up in your local game store's Unabridged Cube during spoiler season - courtesy of the Cube's having one of each card ever printed. A Firemind's Research is now sitting on his side of the battlefield, gathering counters from the higher density of instants and sorceries in his deck. This has translated into more draws for Nikola, more removal in his hand, and several cards you've found very hard to stop.

Nikola has already drawn and cast a Cinder Storm this game - three times, in fact, with his Archaeomancer and Ghitu Chronicler - but he's aimed it at your best creatures for the most part. Now, the immediate danger is from his Scuttling Doom Engine, and for a few turns now, you've been tapping it down with your Rathi Trapper.

That's not to say that you have other concerns at the moment: The Lust for War on your Spike Feeder is dealing three damage to you each turn, and Nikola keeps blocking it with his Psychic Membrane for more cards. On top of that, Nikola's now thrown in a Chariot of Victory-equipped Covert Operative for its first bit of combat damage. The Sun Droplet on your side of the table has been your one saving grace... but even it can be overwhelmed, and that's what happening to you right now.

Fortunately, you still have your turn coming, and you've just pulled a Big Game Hunter from the top of your deck. You'd rather not have to face Nikola again for a third game - not when there's the possibility of receiving multiple Cinder Storms to the face - so you really want to end these shenanigans now. But what can you do here?

It is the start of your first main phase. Defeat Nikola before the beginning of his next combat phase. 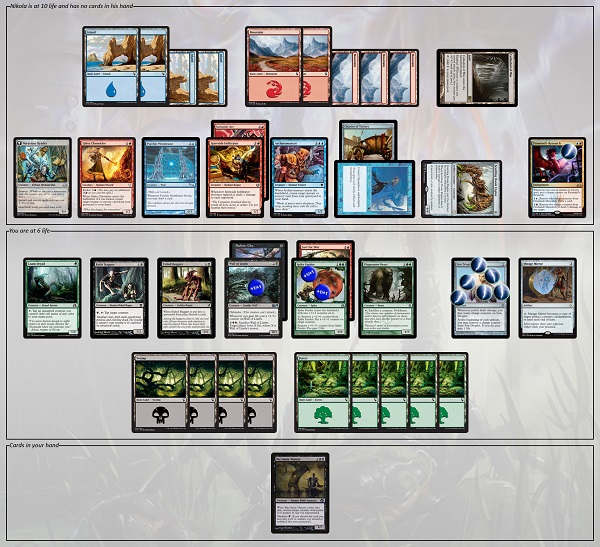 You have not yet played a land this turn. You know neither the identities nor the order of the cards remaining in your library.

Nikola is at 10 life and has no cards in his hand. He has the following cards in play:

If you think you've got a great solution in mind, don't put it in the comments! Instead, send it to puzzles@gatheringmagic.com with the subject line "Puzzle - Simulated Conditions" by 11:59 P.M. EST on Monday, September 24, 2018. We'll include the best ones in next week's article along with the next puzzle!

"With so many blockers on the other side of the board," Ryou Niji writes, "the apparent way to win is to find some way to untap Thunderscape Apprentice and ping the opponent to death. Unfortunately, that ends up requiring a boatload of mana, and while we can produce infinite mana, and we could get infinite pings if we have infinite mana, we cannot do both with only a single +1/+1 counter available."

"Your best bet for dealing a lot of damage is Narcissism," Greg Dreher continues, "but the best creature you could steal with Traitorous Blood, Mari's Cerulean Wyvern, doesn't work, due to its protection from Green. But if you had infinite mana, it wouldn't matter what creature you took; you could make it arbitrarily large and attack for the win."

"Some of Mari's attackers look worth stealing," Matt Bocek notes, "but ultimately what we want is the Vigean Graftmage for its potential to give us infinite mana. The trouble is that first we need to put a +1/+1 counter on Elvish Aberration. We have a lot of ways to buff creatures, but the only one that gives counters is Legion Warboss. That means most of our solution will take place at instant speed during combat."

The only thing that remains, then, involves getting some combat damage through - which is a problem considering your lack of evasion. "This one kept me going for a bit," Marco Majoor writes, "as Mari has a ton of blockers. I couldn't find a way to give one of my creatures trample either... until I finally read what Traitorous Blood actually does. Well, there's a trampler for you."

Putting this all together gives us Renwick Bromiley's solution:

Notably, the ability to make Vigean Graftmage an attacker with infinite power and toughness negates more than a few things: Mari can block with all her creatures, use Advance Scout to give something first strike, tap Alabaster Wall to prevent 1 damage, or gain 3 life with Faithbearer Paladin's lifelink ability... but it all doesn't matter in the end.

"You can feel free to pump the Faithbearer Paladin too," Russell Jones observes, "so that the lifegain falls just short of stopping lethal damage for a more humane death. You two always worked so well in combination, including your cards!"

"Mari's ability to solve these puzzles even before we look at them is one of her greatest strengths," Addison muses, "but in this case, I bet she's probably a little put out to predict her own demise."