Editor's note: This puzzle has been corrected from its original version. We apologize for the inconvenience!

"Hey, guess what I just drew!"

"A Merfolk Falconer!" Violet says gleefully, tapping five lands and putting the pseudo-Air Elemental onto her side of the field.

"You don't say," you mutter, not looking up.

"That gives me a full party!" Violet says. "Look - Warrior, Cleric, Rogue, and Wizard! I'll gain one life from my Kor Celebrant too, which gives me another Cat token... and that gains me another life!"

You groan into your hands again. With the whole social distancing thing going on, your local game store has been running smaller prerelease events for Zendikar Rising. Although that means that you have to slog through a smaller field of opponents, it also means that it's quite hard to avoid the people you don't want to face.

Like Violet, for instance. You could hear her all the way across two tables during deck-building, and you've spent most of your match wondering if she has an 'off' switch.

"So now I'll activate my Seafloor Stalker with one Blue mana, and I guess you know what's happening!"

"Make it stop," you say in an absolutely dead voice.

"It's not stopping, hon," Violet says. "You're taking three!"

This game might have gone a lot quicker if you had made some better mulligan decisions. As it stood, you kicked off your first hand with a Pelakka Predation and a Khalni Ambush - both of which you ended up playing as lands when your deck didn't cough up any Forests or Swamps. To be frank, you're lucky you've managed to survive this long.

You're about to start banging your head on the table when Violet leans back with a smug look on her face. "It's your turn, hon," she says.

You force yourself to sit up and grab the lone card in your hand. You've been holding onto a Subtle Strike for a while now, fully expecting your opponent to attack with their Tazeem Raptor into your Taborax, Hope's Demise. However, Violet's been canny enough to realize that she's got a good thing going with Seafloor Stalker and the party mechanic, and you haven't had the chance to use the Strike at all.

It's probably just as well, though. You really want this match to end, mostly because you're one game down and you're not sure if you can stand Violet's perkiness much longer.

You take your draw and add a Thwart the Grave to your hand. Unlike Violet, though, you don't have much of a party organized on your side of the board.

You think you see something out of the corner of your eye - a glimmer of a play that looks like it might just work. You're not sure if you can pull it off, but if you can, then that means...

Suddenly your eyes widen. "That means that we might go to Game 3," you say out loud.

"Yay," you say, with a lot less enthusiasm.

It is the start of your first main phase. Defeat Violet before the beginning of her next combat phase. 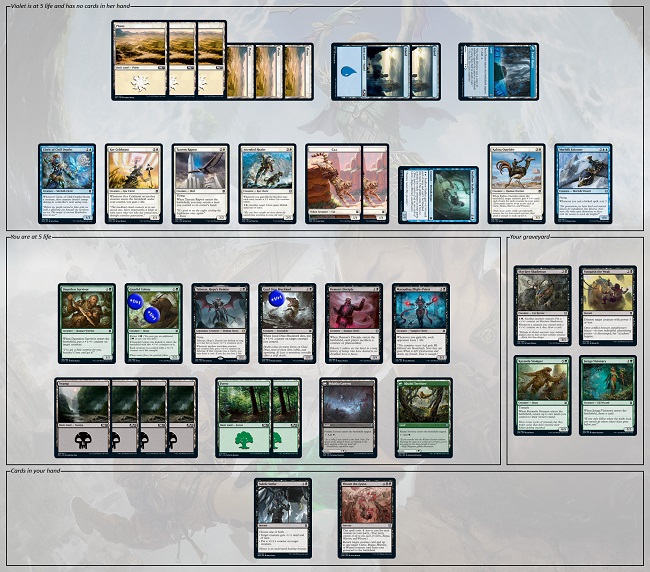 Violet is at 5 life and has no cards in her hand. She has the following cards in play:

Instead, if you think you've got a great solution, you can send your solution to puzzles@gatheringmagic.com with the subject line "Puzzle - Joie de Vivre" by 11:59 P.M. EST on Monday, September 28, 2020. We'll include the best ones in next week's article along with the next puzzle!

"Lots of decoys in this one," Max Bernstein writes, "and some very tricky mana. But in a twist that surprises nobody anymore, the Zendikar Rising spoiler card is the key to our victory! The surprising twist is just how often we need to activate it, because both modes are vital for this one."

"It's clear that we need to win this one with evasion through the air and by size," Bastian Grimberg notes. "André's sole flying blocker Sunweb cannot block weenies, so our Flamewake Phoenix and Master of Winds in the right mode can slip right by and then smack him around.

"So, our master plan involves enabling the Phoenix to attack meaningfully, keeping the Master small to bypass Sunweb, then pump for big damage:

"My biggest roadblock was realizing that we actually have enough mana to cast and activate everything we need," Michael Feldman adds. "It's easy to forget that Vodalian Arcanist gets another go after Crackleburr untaps it, and that Boulder Rush is cheaper than the creature it shares a card with (as well as your other two instants).

"A few factors make for very tricky but IMHO very satisfying sequencing, with apparently no margin of error:

So, despite the situation at first glance, Mari has this completely under control. "Ideally," David Arnold muses, "Mari would have a groan tube to make a sound effect every time Master of Winds' power and toughness flipped."