Login
0 Item
Advanced Search
Sign In
Create Account
Gordon's expression is that of a man who is perpetually angry at the rest of the world. There's a certain deliberation to it, as though he's spent years practicing the scowl in front of a mirror. It almost feels like he's an explosive device on an unknown timer, ready to go off at the first person who so much as plays a turn-one Llanowar Elves at him.

Needless to say, you've been watching your step around him. The fact that he's your first-round opponent in today's Throne of Eldraine prerelease tournament only makes your job harder.

Gordon is playing some dubious creatures in his deck, but he's making up for it with a lot of removal: He's already taken out most of your mid-sized creatures and is now working on getting through your current stalemate. Fortunately, you've had access to a lot of Food tokens thanks to your Witch's Oven, and your

deck has given you more than a few creatures to sacrifice. With Gordon's Brimstone Trebuchet being the only regular source of damage on the table, it looks like this is going to be a long game.

Gordon taps seven lands and moves his Reaper of Night onto the battlefield. "Seven for Reaper," he says.

You remember the Reaper very well - Gordon caught you with its Harvest Fear effect last turn, taking out the Hypnotic Sprite and Mystical Dispute in your hand. What you don't like, though, is the fact that he now has three potential flying attackers. Your 3/6 Steelgaze Griffin may be holding the line at the moment, but it's one Bake into a Pie away from putting you in a world of hurt.

Your eyes suddenly fall on Gordon, who's fixing you with that uneven stare of his. With a start, you straighten up.

You briefly consider feeding another creature to your Oven, but decide against it: You don't have a lot of use for a Food token right now, and at six life, you can stand to wait a little longer. Instead, you simply untap your permanents and draw a card, feeling a little relief at the Once and Future in your hand.

Gordon gives you a look that could probably melt butter, and then slowly checks his phone. "Eleven," he says.

You fan out the cards in your graveyard, wondering if anything looks good. So far, it looks like Fell the Pheasant gives you a convenient method of defense, Witching Well can dig for more solutions, and Beanstalk Giant might be able to swing the pendulum back your way (assuming that it doesn't get Baked into a Pie and all).

You're torn between two options right now. Part of you thinks that you should continue to play the long game, so as not to trigger whatever lies behind Gordon's intimidating expression. Your opponent doesn't have an overly strong advantage, and your position seems likely to improve in the next few turns, so you can pull this off fairly easily unless Gordon draws more of his removal.

The other part of you, however, thinks that you should just cut loose, try to win the game this turn, and hope that Gordon doesn't burn you to a crisp with his blistering gaze. You'd rather get this game done so that you can move onto an opponent who's a lot more pleasant to look at, so this seems to be the better choice.

It is the start of your first main phase. Defeat Gordon before the beginning of his next combat phase. 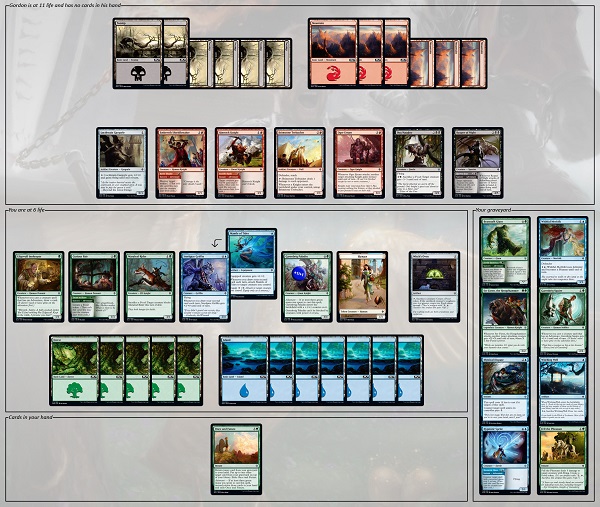 Gordon is at 11 life and has no cards in his hand. He has the following cards in play:

If you think you've got a great solution in mind, don't put it in the comments! Instead, send it to puzzles@gatheringmagic.com with the subject line "Puzzle - Guess Who's Coming to Dinner" by 11:59 P.M. EST on Monday, October 7, 2019. We'll include the best ones in next week's article along with the next puzzle!

"20 life is a lot," Addison Fox notes, "and we've only got one burn spell that can target Suree for only a third of it. However, Vigor's static and triggered abilities aren't off, so we can see about pointing some of that damage our way."

"If you cast a fully charged Sundering Stroke," Greg Dreher points out, "you could pump your creatures with Vigor's effect, but there's no way to get through Suree's board. That means you need to use it directly on Suree. You can only target a player once with Sundering Stroke, so you'll have to get creative to score that triple shot."

Spiteful Sliver makes a huge difference here, since any damage dealt to it (or any other Sliver creature you control) can be thrown your opponent's way. The problem is that Vigor hinders you as much as it helps, since it'll prevent the Sliver from taking damage.

At this point, you have a method available, and just need to figure out the sequencing. "This took some maneuvering to figure out how to kill off Vigor," Sean Patrick Keatley writes, "but here it goes:

Between Savage Stomp, Sundering Stroke, and an attack into Spirespine, you have three major sources of damage here. The interesting part is that they can be interchanged to some extent: Your only requirement is to remove Kathari Screecher before attacking into the resulting Spirespine, as Russell Jones points out:

"If you wanted to count the extra damage anyway," Russell remarks, "that would be fighting dirty."