Login
0 Item
Advanced Search
Sign In
Create Account
It's been a while since Vern passed by your local game store. According to him, it's for good reasons: The first is that he doesn't like wearing face masks. The second is that he's old enough to have to worry about his own health whenever he steps out of the house.

"What's a floppy disk?" you ask, in your most innocent voice.

You're kidding, of course - you know what a floppy disk is. On top of that, Vern looks just fine for his age. He's even wearing a mask, so the desire to play one or more games obviously overcame the prospect of staying at home.

You're actually playing one of Vern's decks at the moment: a Blue-Green deck whose creatures are all legendary. ("Because I was bored," Vern says.) Vern, on the other hand, is playing a loaner - one of CJ's random piles of cards that you're dropping off at his place later this evening. And much to your surprise, you've found yourselves stuck.

The problem isn't that both of your decks aren't very good (although they do come close). The problem is that the pile Vern's playing apparently has a good amount of lifegain, and the Blue-Green deck you're playing is slow. As in, really slow.

Vern taps five lands and casts a Black Carriage. "Now there's a bad card for you," he says.

"It's a 4/4 trample creature with a terrible ability. I won a game with it once - only once, but that was when Standard had Homelands and Ice Age, and wasn't even called 'Standard'."

"Not since you stole my Wall of Reverence," Vern says, scratching his head. "I don't suppose this deck has anything that can break through a ton of life, does it?"

"You'll have to ask my friend," you admit. "Even I can't tell you what he's thinking when he puts these decks together."

"At least I know we'll get along with each other. You're right, by the way - I'm not attacking into that mess of yours. So, you can go ahead and start your turn."

You untap your permanents and start to draw a card, only stopping when you realize you're forgetting something.

"I almost forgot about the Binding Grasp," you say.

Vern shakes his head. "I was hoping you would," he says. "Now I know we're really stuck. I knew I should have put an Ambassador Laquatus in there."

"I don't know, Vern. This stalemate's going to have to break sometime."

"I've been on the receiving end of too many draws to believe in that," Vern says. "If you think we can find a way out of this situation, you'll have to prove it." 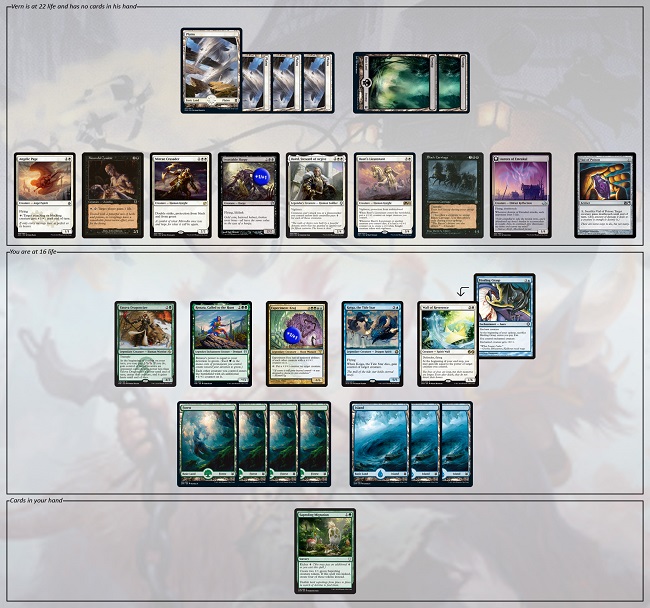 You are at 16 life, with the following cards in play:

Before doing anything else, you will need to resolve your Binding Grasp's ability: You may choose whether or not to pay its upkeep cost. You or your opponent may also activate abilities in response.

You have not yet played a land this turn (because you haven't reached your main phase yet). You still have a substantial number of cards remaining in your library, although you know neither the identities nor the order of those cards.

Vern is at 22 life and has no cards in his hand. He has the following cards in play:

Instead, if you think you've got a great solution, you can send your solution to puzzles@ gatheringmagic.com with the subject line "Puzzle - Getting There" by 11:59 P.M. EST on Monday, October 19, 2020. We'll include the best ones in next week's article along with the next puzzle!

This three-in-one puzzle turned out to be more difficult than expected. While most people seemed to find solutions for your first two draws fairly quickly, the third draw was quite the stumper.

Painsmith's solution isn't immediately obvious, but it does have a good lead: You only have one artifact on your side of the table, so retrieving and casting Moriok Replica is probably an important part of the solution. As Hyman Rosen notes, this is indeed the case:

Tomoe can block Yargle with more than three creatures, of course. However, this means that she has to let at least one of your other attackers through, and results in her taking 7 or more net damage anyway.

The Cartouche solution has one variant: You can instead sacrifice Selfless Cathar to its own ability, then cast Cartouche of Solidarity and Weight of Conscience on Tethmos High Priest to bring back the Cathar twice more, sacrificing it each time. This leaves you with a 5/5 Moriok Replica and a 3/3 Warrior token, as well as enough mana from Eldrazi Spawn tokens to finish your opponent off.

The Raiders' Wake solution is definitely the most complex one in terms of analysis. This is because you need to use elements of the previous two solutions: You need to activate Blood-Chin Fanatic, Selfless Cathar and the ability given by Deviant Glee; as well as cast both Weight of Conscience and Raiders' Wake. But the problem really lies in finding enough mana for this solution, as David Arnold writes:

The fact that you're removing Cubwarden and sacrificing Moriok Replica to Blood-Chin Fanatic greatly reduces your opponent's blocking options. Because they need to take less than 5 damage, your opponent needs to throw at least 8 toughness' worth of blockers in front of Yargle. This means that they must either:

All this boils down to a single conclusion: Frontline Devastator must block Yargle in order for your opponent to survive combat. This destroys your 12/5 Yargle, and guarantees that you get an additional Eldrazi Spawn token from Pawn of Ulamog.