"Madame Kostana says that the Skyblinder Staff will be the doom of me," Jane says simply.

You glance at the lone card in your hand, but no matter how you view it, it resembles a War Priest of Thune a whole lot more than it looks like a Skyblinder Staff. You wonder if that says something about your opponent's sanity.

"So what you're saying is that... the Skyblinder Staff..."

"But you're Madame Kostana," you point out.

You shake your head. This is your second time playing against Jane in an Unabridged Cube draft match, and she apparently hasn't changed. Maybe the act of considering one of each card ever printed does a number on the mental faculties.

You have no idea where Jane got into the notion of a Skyblinder Staff, but her reference to "doom" is obvious: You've had a Doom Foretold sitting on your side of the table for a few turns now. Despite Jane's overdramatics and your low life totals, though, neither of you are in danger of losing to it anytime soon - the battlefield is just too populated at the moment.

"So, random pieces of equipment aside," you say, "what you're really saying is that one of us is eventually going to draw some direct damage and use that to finish off the other."

"But you're Madame Kostana."

"The one and only," Jane says as she taps her Destructive Digger. "I'll sacrifice a Mountain to draw a card. I need to hurry before you take your next draw."

"And Madame Kostana is never wrong," Jane says, grinning. She draws her card and triumphantly drops it onto the table.

"I knew it was going to be a big creature," Jane says happily.

"Yeah, well, it was bound to happen," you concede. Inwardly, you thank yourself for adding a Hushbringer to your card pool: Right now, the Throne of Eldraine rare is single-handedly preventing a whole host of triggers from taking place - one of which happens to be Jane's Elemental Bond.

"Your turn," Jane reminds you.

You untap your permanents and feed a Benalish Hero to your Doom Foretold. "I'm not sure if I want to go through all the effort of figuring out what this thing does," you admit. "Besides, I'll need to find a way to deal with that Scourge."

There's still the question of how to break your stalemate with Jane, but you have to admit that her "doom" prediction is likely to come true: Sooner or later she'll draw something that deals damage to players, you'll shuffle up for Game 2,and you'll sit through another fifteen minutes' worth of her strange predictions.

You peel a card off the top of your deck. Well, what do you know - it's a Skyblinder Staff.

"Yeah," you say to no one in particular. "That's not creepy at all."

"You want to know something even more weird?" Jane asks. "Madame Kostana isn't getting any vibes from your next draw. I hope that doesn't mean anything."

It is the start of your first main phase. Defeat Jane before the beginning of her next combat phase. 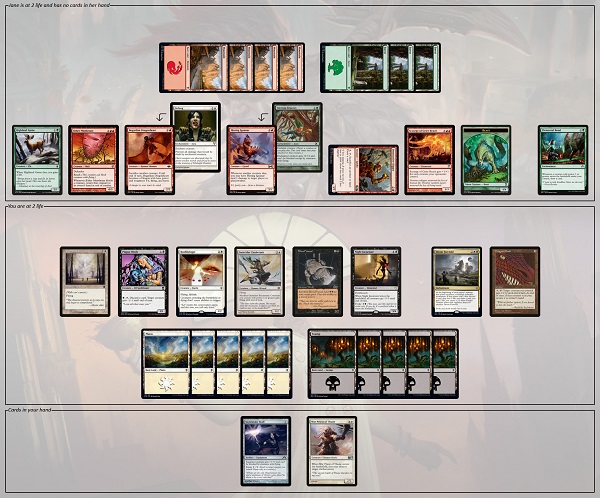 Jane is at 2 life and has no cards in her hand. She has the following cards in play:

If you think you've got a great solution in mind, don't put it in the comments! Instead, send it to puzzles@gatheringmagic.com with the subject line "Puzzle - That Thing You Doom" by 11:59 P.M. EST on Monday, October 28, 2019. We'll include the best ones in next week's article along with the next puzzle!

This puzzle puts you under a major restriction in your opponent's Intrepid Hero: You can't target it with any effects due to Mask of Avacyn, and it can take down any single creature you control with 4 power or greater. What's more, you're not quite certain as to when your opponent will actually activate the Hero's ability, so you're stuck having to work with its presence.

"Getting in for any amount of damage when we can't have a 4-power creature AND Ashish has so many blockers is unreasonable," Addison Fox writes. "It requires a creature who can change its power almost at will! Luckily, Shambling Suit has exactly those characteristics, and we can use our piratey goblin friend to fine-tune just how big it needs to be at various points."

Of course, it's not just about making the Shambling Suit small enough to bypass Intrepid Hero - it's also about building it back up again afterward. This means that there has to be some preparation involved, because this two-move strategy needs to be available at any point in which your opponent activates Intrepid Hero. "Fortunately for us," David Arnold writes, "the Helm of Awakening gives us a discount on spells:

In all likelihood, Intrepid Hero gets tapped to blow up your Shambling Suit either at the end of the precombat main phase, or after it is declared as an attacker. In either event, the protocol is the same:

There is at least one variant to this solution: You can place Squee's Embrace on your Aviary Mechanic instead. This allows you to sacrifice it to Scorched Rusalka, and recast the Mechanic to bounce your Journey to Nowhere once more. From there, recasting Journey to Nowhere to exile Dockside Extortionist, then using Amateur Auteur to remove the Journey, will let you get your Treasure tokens.

The best part, of course, is that you end up with enough creatures to sacrifice to Scorched Rusalka regardless of whether or not your opponent activates Intrepid Hero. The Rusalka ends up single-handedly responsible for half of your opponent's life points... which isn't bad, considering that you started out with only four Mountains!