"That looks like a play-test card," Kei points out.

You pick up the Corrupted Key that you pulled out of your first pack. "I think it's from the Mystery Booster," you say.

"Looks like it," Kei says. "How'd you get a card that you'd normally only find in a Mystery Booster?"

You shrug. "We're playing an Unabridged Cube booster draft," you say. "I stopped asking questions like that a long time ago. All I can say is that this thing seems to have one of each card ever printed. I guess that includes Mystery Booster stuff."

"So you just roll with it?"

You watch as she casts a Fork in the Road, searching up two Forests and putting one of them into her graveyard. She plays the other one, then taps a few lands and glances at your Key once more.

"Does that give deathtouch?" she asks you.

"It only gives deathtouch when it's tapped. It's not tapped right now."

Kei scans the cards in your side of the table. "You don't have a way to tap it?" she finally asks.

"Not that I know of. I can untap it with my Vizier of Tumbling Sands, but that's not exactly the same thing."

Kei plays the last card in her hand, adding a Champion of Arashin to an increasingly-stalled board. She looks at you suspiciously.

"I take it that you're not attacking," you say.

"We're both at six life," she says. "That's too close for my book. I can't help but think that you're going to do something that's going to end this game for me."

"I'm kind of in the same position, you know."

"That's not the point. I guess what I'm saying is, I want to have all my defenses ready. I'm sure you're thinking the same thing."

Truth be told, you are: You find yourself hoping for a draw that will allow you to get in for some damage without leaving a gap in your defensive line. You untap your permanents and add a Blazing Torch to your hand, wondering how you can best use it for that purpose.

"Did you draw something that can tap your Key?" Kei asks. "If you just did, I think I might as well shuffle up."

"Not exactly," you say. "You'll probably want to sit back while I figure out how, though."

It is the start of your first main phase. Defeat Kei before the beginning of her next combat phase. 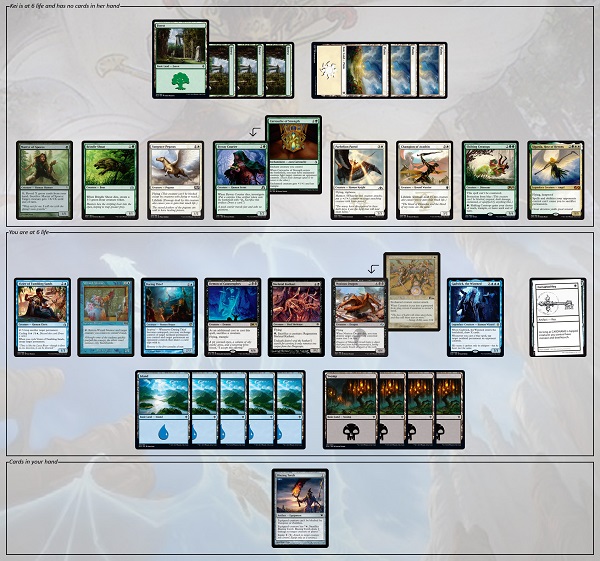 Kei is at 6 life and has no cards in her hand. She has the following cards in play:

If you think you've got a great solution in mind, don't put it in the comments! Instead, send it to puzzles@gatheringmagic.com with the subject line "Puzzle - Lock and Key" by 11:59 P.M. EST on Monday, December 9, 2019. We'll include the best ones in next week's article along with the next puzzle!

"Ghirapur Aether Grid stands out as the only direct damage or creature removal," Jacob Butcher writes, "which begs the question of how to produce untapped artifacts to power it. The answer is Salvaging Station and the combination of Emry, Lurker of the Loch and Mirran Spy.

"That begs the question of how to move tapped artifacts to the graveyard. The answer to that is Michiko Konda, Truth Seeker; Welding Jar; and Heap Doll. Heap Doll cannot be resurrected by Salvaging Station, so it must be resurrected by Emry, Lurker of the Loch. Doing so requires mana, so Sol Ring must be part of the tap/destroy/resurrect cycle."

The combination of Mirran Spy and Emry, Lurker of the Loch is a potent one, allowing you to cast any artifact from your graveyard, then have the Spy untap Emry on its trigger. This enables you to take advantage of an infinite sequence, although some preparation is involved.

The sequence has the added bonus of being a thematically funny one: "After about the fourth time pulling the Welding Jar out of the loch," David Arnold writes, "Emry was beginning to suspect that they were throwing it in there on purpose:

Now that you have Salvaging Station, Welding Jar and Heap Doll on the battlefield and untapped:

"Surprisingly," Jacob adds, "Michiko Konda, Truth Seeker's destruction of permanents is actually a boon, as resurrecting artifacts from the graveyard is easier than destroying them."

"Poor Nox," Addison Fox writes. "Even when we draw an absolutely do-nothing brick of a card, it turns out that the last game action they took completely wrecked them again. Stealing a win off of mandatory triggers on your opponents' side of the board is always one of the sweetest puzzles, and Welding Jar's more idiosyncratic templating is exactly what the doctor ordered."