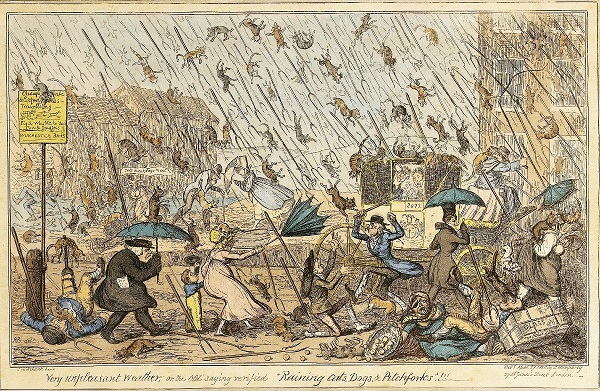 Longtime readers may have noticed that my weekly art headers have recently been older ones from my pre-CoolStuffInc blog postings, rather than fresh new art mashups. Eventually that will change and I'll be back to my old ways. Today I wanted to share an old illustration by George Cruikshank from 1820 called "Very Unfavorable Weather." It's a departure from my usual header in that I chose not to put a character from a Magic card onto it, so I also didn't tag it with the usual "Commanderruminations." This week it's going to be raining cats and dogs. According to Cruikshank, the saying used to be "raining cats, dogs, and pitchforks" but we're just going with the first two for today's deck.

Are you a dog person?

Are you a cat person?

What if you could run a commander that would head up a deck with the cutest doggos and kitties ever printed? Every good boy and cute kitty cat you could ever pull out of a booster could go in today's list and it would be the most adorable deck ever. The only question left to answer is whether you go make a custom "hang in there" kitten playmat, dogs playing poker playmat, or a kitten running away from two Domo playmat?

I hate to break it to you, but today isn't going to be a list of the 20 cutest dogs and cats in Magic. That might be an excellent column. (Paging Abe Sargent, CoolStuffInc.com's resident master of top 10 lists...) That's just not where I'm going today.

Before we dive deeper, let's look at Rin and Seri, Inseparable. This Core Set 2021 legendary creature might not seem that powerful. When you cast a dog, you get a cat, and when you cast a cat, you get a dog. You can tap Rin and Seri and deal damage to any target equal to the number of dogs you control, and then gain life equal to the number of cats you control. 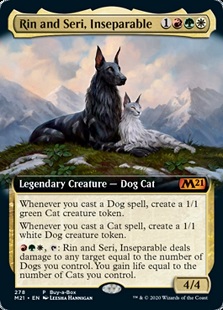 To quote one of my favorite films, The Road to El Dorado...

I warned you that I wasn't going to be giving you a long list of cute dogs and cats.

There's nothing cute about what I'm going to do with today's list. These guys are weird, malformed, misshapen and sometimes even ugly, but they are the two things we care about. They are dogs and they are also cats.

They are changelings, and they have all creature types.

With 17 Changelings in today's list, we should have a steady stream of creatures that will give us both a dog and a cat, as these changelings are both Dog spells and Cat spells. While most of them don't have artwork that is even vaguely reminiscent of a dog or cat, they'll help us go wide.

Many of our Changelings are vanilla, like Universal Automaton, or "french vanilla," having a single keyword to spice them up, but a few actually bring something to the party. Taurean Mauler will grow over time, getting +1/+1 counters for each spell our opponents cast. Mirror Entity can make all of our creatures X/X by paying X mana. With enough cats and dogs, this represents a real threat and should help us win games.

When we tap Rin and Seri, our Changelings will count as dogs to let us do more damage and will count as cats to let us gain more life. If we've cast three Changelings, making 3 cat tokens and 3 dog tokens, we'll do 6 damage and gain 6 life. That's not game-breaking but it's not nothing and over a long game that potential removal and lifegain will add up.

While I'm running pretty much every changeling in Naya colors that I could get my hands on, It's worth noting that tribal instants will also give us tokens.

These aren't creatures, but on the stack they happen to be Dog spells and Cat spells.

I know it's weird, but Rin and Seri don't actually care that we're casting creature spells, just that they have the subtype of Dog or Cat. That doesn't mean these are the best cards to include in the build, but I love finding odd synergies and I'll play them even if they're not exactly optimal cards.

Non-Changelings with Rin and Seri

I'm going to have a combat-oriented game plan, but changelings aren't like Goblins and Elves. We're so limited in our card pool that we'll need to reach outside of our "tribe."

In a deck that should have 1/1 tokens lying around, Bloodspore Thrinax is a pretty good fit. If we devour just four of our tokens, the next time we make a 1/1 Cat or Dog they'll come in with 4 +1/+1 counters. It's a small sacrifice for the chance to have some pretty big creatures later on. Mentor of the Meek will let us pay to draw cards when our 1/1 token creatures enter the battlefield and is always a staple in decks that play with tokens. Sidar Kondo of Jamuraa might seem like an odd choice, but he'll let us swing freely with any 1 or 2 power creature we control against opponents without flying blockers.

While I'm not running many non-Changelings, it's worth noting that I did include a few Cat and Dog Lords. These guys won't just pump up half of our tokens - they'll also pump up all our Changelings and our commander as well.

Hoping for the Best

This list has a lot of fun stuff, but ultimately this deck is going to try to win on the battlefield. We're not looping into infinite combats, drawing our deck or doing anything too powerful.

I may not be going infinitely wide, but I'm going to be making tokens so I'm going to want to run token doublers.

Parallel Lives and Anointed Procession will fit right in along with Doubling Season and Primal Vigor. Playing a single Changeling and getting four tokens will feel pretty good and if I can do that a few times and play Second Harvest to double my tokens I should be ready to do some real damage to somebody.

Even if I can't go infinitely wide, I'll want my army to hit as hard as possible.

Beastmaster Ascension and Coat of Arms will let my creatures pack more of a punch, though Coat of Arms can be a double-edged sword so there may be games where I need to hold it back. Cavalcade of Calamity will let me turn an army of 1/1 creatures into a decent chunk of direct damage and it gives me the flexibility to deal that damage to a planeswalker instead of the player.

This list feels like the kind of deck that will be able to hang at casual tables, have fun and occasionally surprise folks with how well it can spam out and use all those Dogs and Cats. The one card I should call out in this list is Ogre Battledriver, not because it's bad but because I just swapped it in for Elesh Norn, Grand Cenobite. I hate Elesh Norn, I hate playing against it and I don't own a copy. If you think Elesh Norn is better in this list than Ogre Battledriver, you're probably right and you should feel free to swap her back in.

This is a mostly Selesnya list with a splash of Red. There's no Naya Triome land and mana rock to throw in, so I've set the deck up with what is my standard mana base for these colors. As always, this is a starting point for you to tweak, massage, and turn into your own Naya Changelings deck.

Will this list play better than a mishmash of cute dogs and cats?

I hope so, but I appreciate that having a deck chock full of the cutest creatures in the history of Magic would be its own sort of reward.

I don't know if Abe Sargent will respond to the bat-signal I put up today, but if we're lucky we might get one of his carefully curated Top 10 (or 20?) lists with adorable Dogs and Cats. It's possible that's a list he's already made and he won't want to go do it again, but if he does I'll be ready to give it a look.

I'm happy to report that my LGS has started hosting players again. We're all wearing masks and a few of us are convinced that there's going to be another shutdown as too many people aren't taking this global pandemic seriously. I know, that seems insane, but how often do you see some dummy walking around without a mask or with it only covering their mouth and not their nose? I happen to be in New England, and our region seems to be faring a little better than other parts of the country, but I think the prospect of a second wave is quite likely.

I'm not sure what I'm writing about next week, but please be safe out there.

If you're able to play Commander games in person, please be smart. Wear a mask. You can be asymptomatic and be shedding the virus. Protect yourself and others and help us all get through this a little quicker.