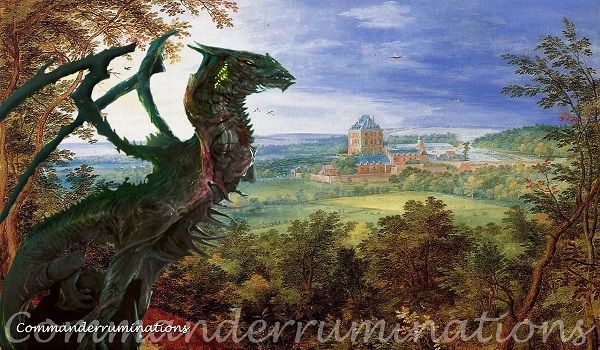 Landscape with the Chateau de Marimont by Jan Berughel the Elder (1568-1625). Skithiryx, the Blight Dragon by Chippy.

This is the second time I've had the chance to write about the last kid picked for a schoolyard game of kickball. We in the team of CoolStuffInc.com Commander writers have been pushing ourselves to cover every single commander released in recent sets and with today's column we will have covered all of Magic's Adventures in the Forgotten Realms expansion set. Fellow writer Mark Wischkaemper had offered to take this bullet for us, but he didn't sound that enthused and I often enjoy these challenges. I've even started building last week's Inferno of the Star Mounts deck with a number of minor changes like the addition of damage doublers and a few old cards that missed my gaze when I wrote that column.

I've been writing about a lot of dragons in recent months, so it's fitting that our last legendary creature is none other than Ebondeath, Dracolich.

Ebondeath is a 5/2 Zombie Dragon with flash and flying. What's not to love there? It enters tapped, but it can be cast from the graveyard if a creature not named Ebondeath, Dracolich died this turn. That means I won't be flashing it in as a blocker, but I will be able to bring it back on the end step before I untap if another creature died.

While I could see running Ebondeath in the 99 of Archelos, Lagoon Mystic, and I could see throwing Amulet of Vigor into this list, I can't see myself developing a game plan for this deck that relies upon Ebondeath entering and immediately untapping. I will want to run lots of removal so that I can reliably cast Ebondeath from my graveyard. Running removal is just good deckbuilding and with a deck that can swing 5 damage through the air, it won't take much to get it to 7 power and put an opponent on a 3-turn clock.

The other thing I can imagine playing with is a force-sacrifice gameplan.

At four mana, two of which must be black, Ebondeath doesn't represent a great combo piece by any stretch of the imagination. I generally look for cheaper recursion in my combo pieces, but with a sacrifice outlet like Ashnod's Altar and a Grave Pact or Butcher of Malakir you could probably keep most of your opponents from being able to maintain a boardstate. You aren't going to easily create a loop with those permanents, but if you can do it two or three times each turn cycle you might just get a table to scoop.

For the record, I don't enjoy playing decks like that. Making your opponents miserable as a strategy to "win" by having everyone else no longer want to play against your deck is not my style. It is perfectly legal, and there are decks like Tergrid, God of Fright, that are better for executing that kind of game plan. It's not like I'm going to be able to give you a Zombie dragon tribal list in mono-Black.

With a gun to my head, if I had to build a mono-Black Dragon deck I'd likely run Skithiryx, the Blight Dragon. It's deadly, it's fast, and you can usually kill at least one opponent - but then everyone hates you off the table. Can a mono-Black goodstuff deck with "Skittles" and other nasty surprises in the 99 be run more effectively with someone else in the Command Zone? Sheoldred, Whispering One will get you as much hate as infect, but if it's not your commander I think you'll end up playing a little less archenemy in your games.

This Ebondeath Goodstuff deck has creatures that will force your opponents to sacrifice creatures. It has boardwipes. It has removal. It has recursion. It's a mishmash of mono-Black nastiness that you can play and not automatically draw the ire of everyone at the table. The goal isn't to trick them into thinking you're playing a precon and then stomp them into oblivion, but it can be nice to not start the game with a huge target on your back.

I think this deck should be able to hold its own in most Commander games outside of cEDH and truly high-powered metas. If you wanted to power down or drop the pricetag of the deck, you'd cut out the fast mana and maybe turn the list more in a tribal direction. I could see a Zombie tribal deck being happy to be able to reliably trot out a flying blocker even if it wouldn't be of any use as a combat trick since it enters tapped. The problem is just that there are so many more synergistic commanders for that tribe.

I could also see a planeswalker deck benefiting from having that flyer in place to make it harder for opponents to just peck away at those precious loyalty counters. Mono-Black flyers and Planeswalkers might make for an interesting deck but I've got a longstanding aversion to playing too many Planeswalkers. The most Planeswalker heavy deck I have is Lathliss, Dragon Queen with five, and those walkers have fantastic synergy with the deck. I'm hesitant to get too excited about the idea of transposing that plan into mono-Black and hoping that enough activations will eventually get me there. If you want to run lots of Black Planeswalkers, you'd probably be better off running Atraxa, Praetors' Voice in the command zone.

The internet is littered with content creators who are adept at whipping themselves into an optimistic frenzy to try to put the shine on even the shabbiest of apples. I can see why Mark wasn't that excited about tackling Ebondeath, but I do like the idea of trying to fly under the radar (pun intended) and then playing more powerful cards that might draw a lot of hate if they were in the command zone.

It's a fine line between pubstompiing and using a lower-powered commander to try to appear less dangerous, so be careful with your rule zero conversations. I'd absolutely urge you to be honest when talking about what you're playing, but not to a fault. I think it's okay to play a deck with a weaker commander as a kind of strategy, but it's not cool to make a game out of crushing as many precons and new players as possible with a highly tuned goodstuff deck.

If my theory is correct, you'll get more mileage running your heavy hitters out of the 99 instead of in the command zone. I think that's why you don't see as many Praetors leading Commander decks - they just draw the kind of attention you don't really want. If an opponent knows you have Elesh Norn in the 99, it's easy for them to tell themselves it might not come out this game and they don't really have to eliminate you first just to avoid having to deal with her.

Now that we've wrapped up each and every legendary creature in Adventures in the Forgotten Realms, I'm somewhat at a loss for what to write about for the next few weeks.

In recent months I've started up the EDH League I run, I'm still altering cards, and I've been playing a bunch of the decks I've written about over the past few years. If there's something you'd like me to turn my attention to, please leave a comment. I'm always happy to hear from readers, and this is one of those moments where you could give me the idea for next Monday's Commanderruminations.

That's all I've got for today - thanks for reading and I'll see you next week!