Robert "Sideshow" Drawbaugh may not be a name you've heard, but after today's article you will learn how one person had an impact on Magic that will forever be remembered.

To give you a couple of examples, the earliest sign of his impact was sugar skull Liliana and his latest influence can be seen in the highly different visual styles of Magic card art illustrations in Ikoria: Lair of Behemoths. 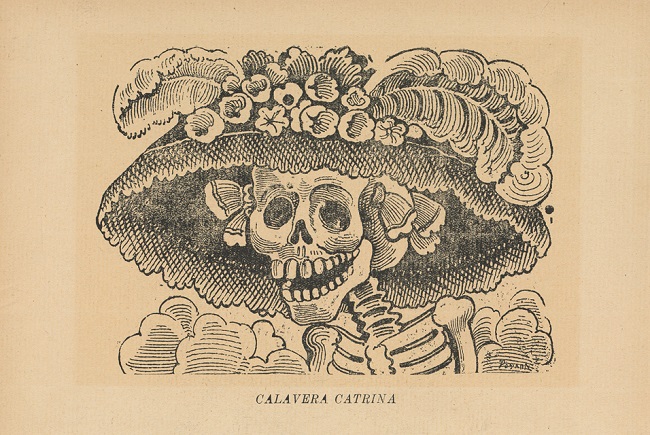 This was incredible political satire in 1910. Like any good momento mori, it reminded people the inevitability of death comes for all, poor and wealthy alike, no matter how fancy their clothes.

Sideshow, as he is more often known as, was a marketing art director for Wizards of the Coast on the Magic: The Gathering brand and asked his former colleague Pamela Ansman-Wolfe to create the image. This would bring a branded Magic character onto clothing people would want to wear, while also blending a character to her mechanic, appropriately weaving in culturally relevant visuals, and also commenting on the inevitability inherent in Liliana's storyline, that she too will face death one day.

It's topically relevant, and the deeper you dive, the better it becomes.

I remember seeing that image and making a note that it was a watershed moment. 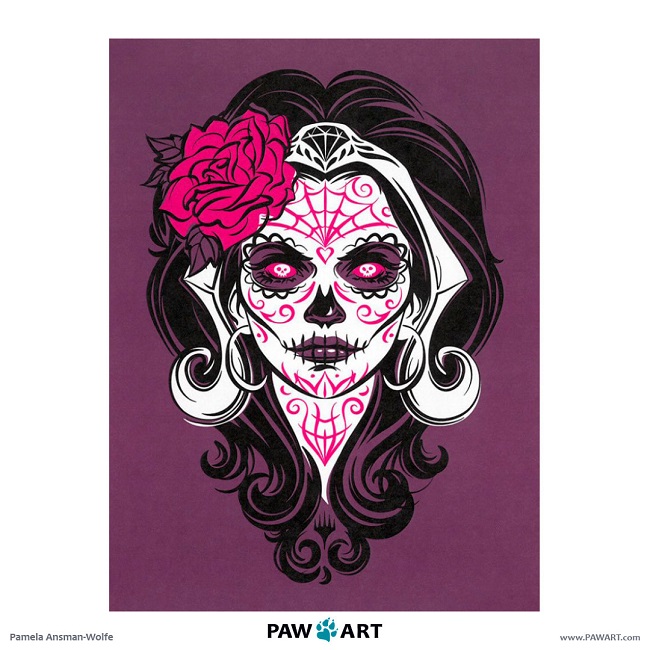 If you didn't like the color purple, you might've missed the shirt.

But, that's not all he did.

He was quietly working behind the scenes for a while on cool initiatives like the Kevin Tong Zendikar poster. This presented a mix of poster and street art culture in a limited run of 140, a "secret lair drop" years before which may have shown market testing for the future at a lower risk proposition compared to cards. 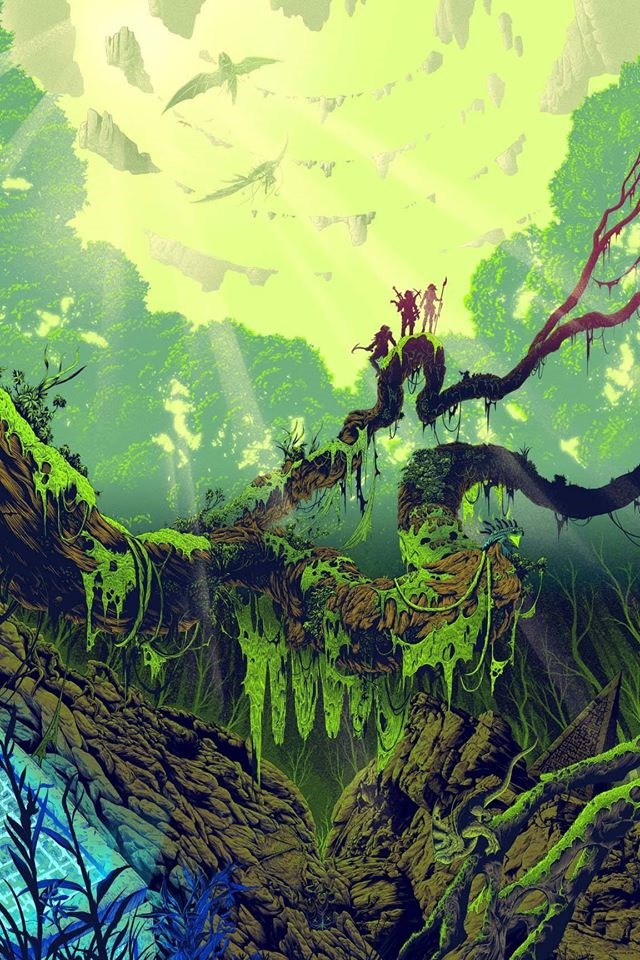 If you were around during the revisit to Innistrad, with zombies and eldritch horrors mashing up, you might have noticed an uptick in the marketing, non-card art changes.

The Hanweir Chronicle, the alternate storyline feature that occurred in early 2016 during Shadows over Innistrad?

Sideshow was the person who "found" Dan Mumford, and started utilizing his talents for poster art within Magic's brand, still was pushing the boundaries of what was on-brand acceptable at the time.

Dan was also commissioned for the exclusive Pro Tour Eldritch Moon art in 2016 by, who else, Sideshow Drawbaugh. 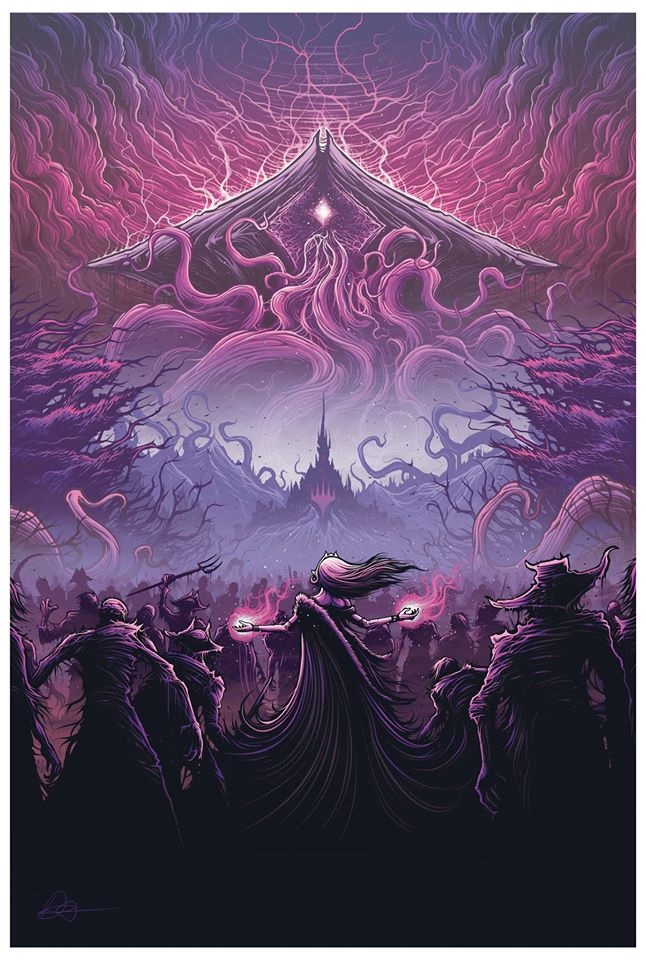 You might better know Dan Mumford if you're Erin Campbell, or, of course, from the recent Secret Lair drop:

That was the moment I knew I had to speak on how one person can make monumental change. I just didn't have the spark yet.

I should have noticed when the San Diego Comic Con 2017 promo with the poster made by Brandon Holt came out that the brand team was trying to expand what is normal, what is acceptable for the brand. I had no idea it was driven so hard by one person. 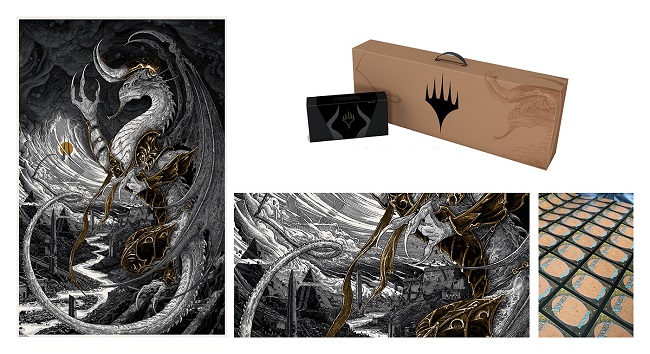 By 2017, I was working to get an art show off the ground at Grand Prix Las Vegas 2018. I had seen the Shadows Over Innistrad three-location reveal, complete with Christine Sprankle, created by Pinnacle. I'll give you one guess as to whether Sideshow was involved.

I kept thinking Helene Bergeot was the lone wolf in making the art show happen. While she had the greatest role, you don't think Sideshow Drawbaugh, with a prior successful concept in Detroit, didn't set the stage for art shows? Magic could be more than just a game, it could be experiences. It had already been done two years prior, just in a slightly different form.

Sideshow was taking the examples before him, that of Guest Stars, and reapplying them to cards, to shift the mindset on guest art and bring it back to cards. Wizards had a guest artist years ago in Michael Whelan's Nalathni Dragon, a big-time promo for Dragoncon created by a very popular and visible artist. That was also 1994. 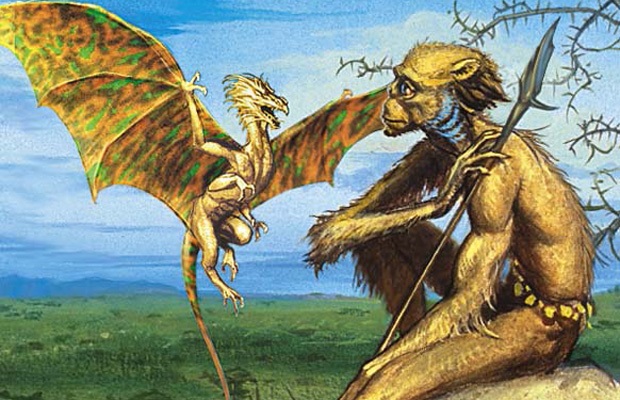 The most recent example was not for art, but rather guest star designers for cards in Magic 2015.

The idea of having "guests" come to Magic was reinvigorated by guest artists due to Sideshow. He took folks he worked with and finally found a home for their art on cards: the Secret Lair Drop Series and Collector Boosters.

Like all major mind shift changes, it takes years for a giant corporation to pivot.

Alternate art promotional cards have been a constant, from conventions like Grand Prix events, San Diego Comic Con, Judge cards, and even Friday Night Magic cards. They've been around, but they were all similar in style. Visually, they could fit into nearly any deck. Some Magic, near bullseye center imaginative realism was employed.

But now? A new concept was pitched. A limited time frame drop of cards to purchase, with the initial print run being the only print run. They're intended to be visually different and a joy as promotional cards. The December 2019 run was utterly wild in terms of visual aesthetic choices, even having street art influence, to Un-card stylistic choices of cats, cartoon tv show looking goblins, and icy lands. These choices? They might've been influenced, even subtly, by prior marketing examples. 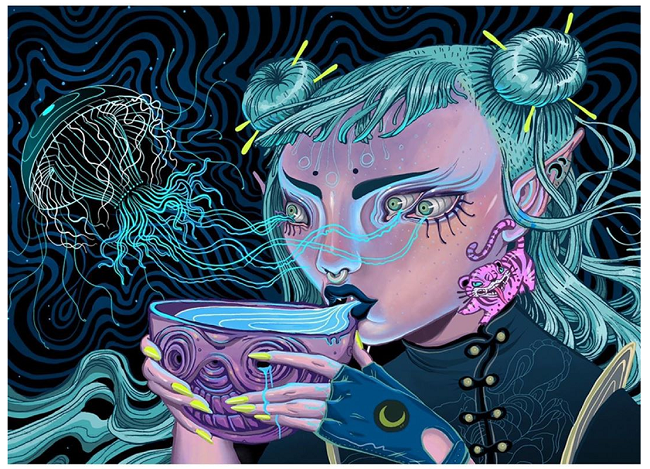 These are cosmetic choices, not unlike free-to-play games with visual modifiers that doesn't impact playability. This is a digital game aspect influencing tabletop, analog games. This is done exceptionally well to bling out decks and create visually arresting decks for those who wish to have that effect. Those who have played with the all-black promo planeswalkers know the feel of someone needing to read the card to understand what is actually happening.

By having a proven example that the art won't break Magic, and by using off-center examples, not in packs, to deliver widely different concepts, Wizards saw how it would be low risk.

Ikoria has changed that again, with guest artist stars being able to create alternate creatures in both a Comic book style and Godzilla monsters as the same creature.

The Godzilla cards take this idea of alternate art and raise it to an entirely new level, with three visually different images for one playable card.

Collector's booster were introduced and allowed for alternate frames, and now, in Ikoria, they allow for radically different, beautiful art.

For planeswalkers, the sheer rarity of the "comic book style" alternate artworks should minimize the confusion for players asking what that card is, while convincing those at the top of WotC that players will like these. They have already loved the shirts, posters, and other associated art that some marketing art director guy pushed to get included.

What brought Ikoria to "past" Sideshow is taking the idea of stylistically different art, and then adding atop that a different branded world as alternate.

What was proposed, we can see, is that the first two versions would be visually similar, like Nethroi here, and the Godzilla variant would be radically different. It would be fine due to their extreme rarity at top tables and FNM. This is great, allows for more art, and has an outside brand tie-in, which opens up a ton of straight sale to consumers, or From the Vault type opportunities at your local game store. This Nethroi is a straight great addition to the game.

Visually similar works to increase sales of Collector Boosters is something I am totally in favor of, and happy it is finally here. More art is always preferable to less art.

Sure, there will be artwork variants that are a bit too dissimilar, and some gameplay mistakes will happen. Hopefully, the rarity itself will minimize that effect.

Thank you for your visionary push to get us more art and more variety in our decks. 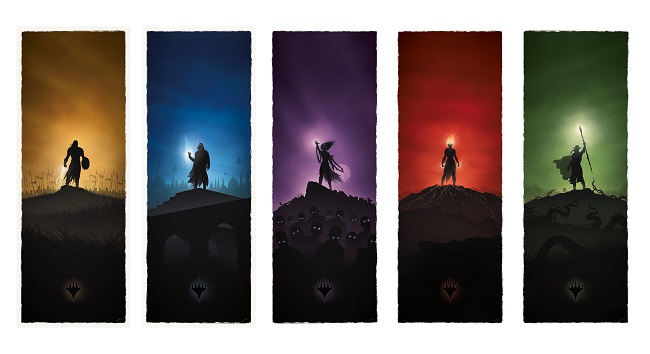 We all play a role. I'm happy Sideshow blazed a trail before us.