The Chesley Awards were founded in 1985 to recognize achievements and artistic works in the fields of science fiction and fantasy, and related areas. Originally called the ASFA Awards, they were renamed to honor Chesley Bonnestell after his death in 1986. The award, a Chesley, is one of the few artist awards voted by peers and enthusiast in the gaming art/imaginative realism industry.

The Chesleys have their final nominations in for this year's voting, conducted by members of the Association of Science Fiction & Fantasy Artists (ASFA) at their annual convention, this year at NASFIC in Layton Utah, July 4 -7, 2019.

Magic has been more visible in the Best Gaming-Related Illustration category as of late, with a few wins as well:

2016 Winner-Ryan Yee for Fruit of the First Tree

This year, all but one of the nominees are Magic: The Gathering artworks in this category, and I figured since I know Lars still has his painting in his studio, he could take few minutes to talk about it, what the Chesleys are, and a little more in an interview today. 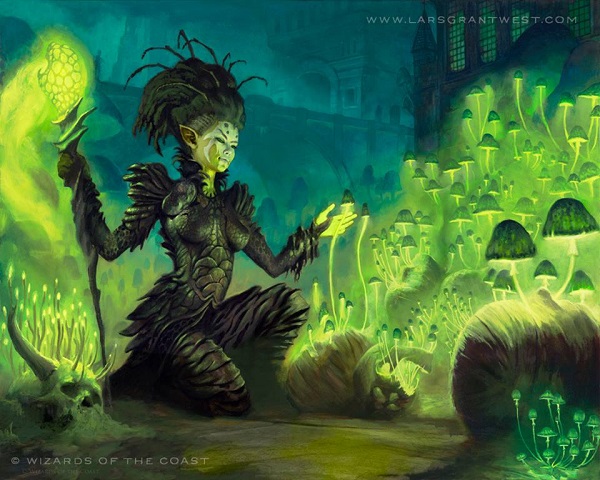 Original to be auctioned by artist

First of all, the Chesleys are an award, what do they mean to win one in the industry?

I've never really been that concerned with awards or ribbons, and don't pursue them, but it's certainly an honor to be considered for one.

The thing about awards. I don't know if it's humility or a self esteem thing - but I really haven't sought them. I do think part of it is that the competition is so good. I'm not good at taking praise...but it also goes hand in hand with my apparent ambivalence about selling paintings. I do like the money, but I'm a marginal salesman, and feel weird about taking the amount of money Magic paintings seem to call for.

Selling is also then self-promoting, which is also awards. That makes sense...

Yup. It was probably a bad career choice on my part to not pursue awards more aggressively. I think I would have done okay - I've never been fond of humble bragging, and it always turns me off really hard...I'd just rather go walk in the woods or photograph bugs, I guess. Less social pressure!

Which doesn't mean I'm not really happy to be nominated....there's a part of me that just doesn't know how to handle that kind of visibility or attention.

This is your first Elf for Magic, as I count by itself. Obviously you can landscape and beast create like a champ, did you approach it any differently?

This felt to me like a continuation of the "product stream" of Korozda Monitor (originally titled "Golgari Corpsehauler"). The bodies are collected, then go to this place where the shaman do their thing - so that's where my head was. 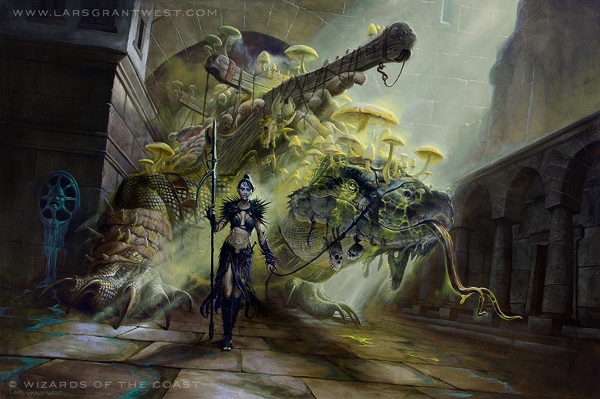 The golgari hit all the buttons for me - cool shapes, arthropod influence. Note the bug legs braided into her dreadlocks and the stylized insectoid markings on her face (also visible in the Korozda elf), and the Golgari mushroom motif repeated in the clothing. I wish I could claim those as my design elements, but those were from the concept push team at Wizards, from this and previous Ravnica pushes.

It was a continuation, a narrative. So it was your choice to make them all glowy?

I liked the glowing fungus in that, and decided to play on that as a light source. One of the things I liked about the Golgari is how much of their existence happens in the dark.

I've always been interested in bioluminescence in the oceans, and have been fascinated with the increasing findings that many, many terrestrial organisms bioluminesce as well, so I thought this would be a great opportunity to make use of that. thinking about the image, I needed a light source....so....bingo...

Did you save any sketches or reference pictures?

I don't have reference shots of her. It was a lot of drawing and redrawing, messing up, then fixing up. Dark outfits covered in mushrooms can hide a lot of errors! ?

I do have the approved sketch around, it's digital: 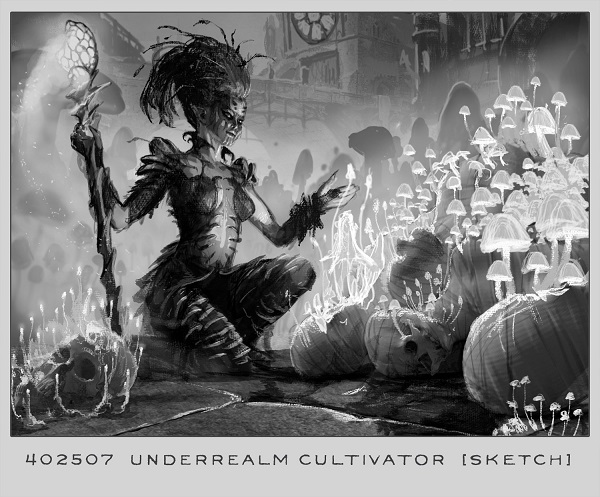 I do a LOT of flipping the sketch back and forth as I work, and that helps me catch errors...but it's also a reminder that I need to spend more time drawing figures.

So, looking at this compared to your other works- How does it stand aligned or apart?

People thought it was a level up, award worthy. Did you? And can you speak to that?

Well, it's interesting. I generally don't do a lot of people-oriented pieces. I used to get more of them, but then told the ADs there that I really preferred creatures, and they've been pretty good about taking care of me on that. Now I'm finding I tend to get a lot of creatures strongly based in real-world animals...and am craving a change. I really like more that involve human/creature interaction. The grass is always greener, as the saying goes.

Oh? We'd love to hear more on that.

I think I'd enjoy more of a mix. I'm definitely NOT a crowd/battle-scene kind of guy - and I don't think I ever will be. It's just not my interest. Landscapes, architecture, animals, and particularly UNUSUAL creatures spark my interest much more, and Magic has plenty of that. I've also enjoyed the artifacts I've gotten to do, and wouldn't mind trying my hand at more of those. 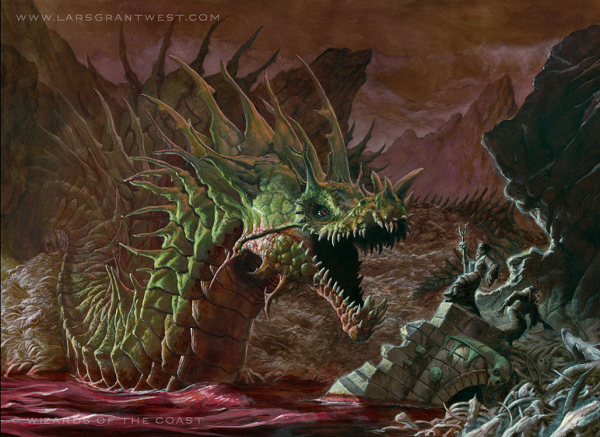 Original still available by the artist

Assignments I've gotten have been kind of all over the place, with a leaning toward large vegetarian beasts and wolves. I've done a few wolves for Magic too.

Oh - this one also gave me the chance to do a couple of skulls...so that's a plus. ?

For people who don't know, Lars used to work for a zoo and has so many skulls. He has hundreds of all sorts of varieties and sizes.

Compared to this, did this piece take longer?

I was originally going to do a skull of the Korozda monitor behind the character, but compositionally I couldn't work it out in a way I was happy with. I have a monitor skull I looked at for reference.

Because of course you do.

Exactly! And that is another connection to a story that existed in my own head only. It is kind of an easter egg for me. Would have been good if it happened. There wasn't a good angle that showed the skull at a giant scale, that still read in a way I was happy with.

I think the piece did take longer - if only because there's so much I wanted to explore. I think I could happily do about a half dozen paintings in this vein.

Fair enough. Card size is always hard. Changing gears, I see someone in her garden, was that intended?

That's exactly what I was after, Mike. No joke at all. My wife loves gardening. She goes out and it gives her solitary time to think, but connected to this kind of burgeoning, silent vibrant life - and that's what I wanted to capture here.

That's also part of the reason I've held onto this one as long as I have. I keep thinking I want to adjust this or that, but then don't because I don't want to deviate from the card art. Better to just do a new painting, or two!

I think in the history of my work on magic, this is among my top five favorites in terms of the idea. So big thanks to Cynthia for assigning it to me.

A giant thank you to Lars for making the time today. I wish him the best of luck in the voting, and if he does end up winning, he might need to put one of his monitor lizard skulls away in storage to make room.