One of the cool things weâve seen in the last few Commander sets is characters from Magicâs past coming alive. We have Planeswalkers like Freyalise, Nature's Fury joining old school Feldon of the Third Path and new school Ludevic, Necro-Alchemist to put characters who we have never seen in card form until now out there.

And thatâs a lot of fun for a few reasons. If you are new to the game, then that continuity means little to you. The latest character might as well have been called Upshaw the Upright. Donât laugh, Upshaw can stand at attention longer than any bodyguard before or since in the history of the thousand year Thule Regency.

Upshaw aside, newer players have no fidelity to new or old characters. But players who have been playing the game certainly do. We finally saw the printing of characters like Jaya Ballard, Task Mage, Ith, High Arcanist, and Mangara of Corondor in Time Spiral. But there are a lot still out there we havenât seen in card form yet.

So which non-Planeswalker characters would I most like to see in print? What legendaries top my list?

When I tell you the history of this one, get ready. So Ramos is a Phrexian Dragon Engine. He is reprogrammed by Urza to protect people. When the devastating blast hits at the conclusion of the Antiquities storyline and takes out bunches of folks, Ramos scoops up as many locals as he can, and planeshifts back to Phyrexia from Dominaria. There he finds a portal to the plane of Mercadia and heads out. But he crashes, destroys some local structures, and the people he saved built up a new civilization and revere him as a god. He has 5 powerstones that are part of his innate Phyrexian essence and power that he gives to the crew of the Weatherlight to finish building the Legacy, and even after that, still has enough power to fly up and take out Volrathâs skyship when he chases after. Ramos is just a bizarre and interesting character in so many ways. A Phyrexian Dragon Engine that is connected to every color of mana, planeswalks, protects others, and is really powerful. Thatâs a seriously interesting character. 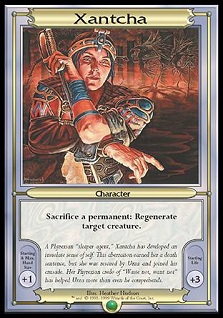 This one goes out to Sam Keeper. I have always had a bit of a fondness for Xantcha as well. Sheâs good, but from more of an amoral level, sheâs interesting, sheâs loyal and sheâs compelling. As a Phyrexian who turned against her masters, she a very compelling character, and Iâd love to see if we could get her a real card.

One thing Magic clearly needs more of is Elves! We need them forthwith. Talara, represented in the card art for Toil to Renown as the Elf sort of knighting the other that is kneeling before her. She is an Elf who created one of the few sanctuaries on Shadowmoor, the dark version of Lorwyn. Like the other Elves of Shadowmoor, she could be Green and White. Since the card that hates onTalara, Talara's Bane, hits either a Green or White creature, that would make sense. Do you know how many Green and White legendary Elves we have in Magic? Three! But none are tied to the tribe. We have Tolsimir Wolfblood, Emmara Tandris, and Selvala, Explorer Returned. We could get a great Elf Lord, or Selesnya Elf leader that has a different take on the tribe.

I like the hope of Xathrid. Xathrid is a Demon on Shandalar and is one of the major players there. There is a level of worship and service to it. Weâve seen a lot of cards that care about Xatrhid from various core sets, and it would be cool to see the actual Demon behind the mask.

This is for you, internet! Did you know that we donât have a Homunculus Legendary Creature? (Donât count Mistform Ultimus. Donât ever count Mistform Ultimus). Everyone wants to see our favorite Fblthp get made as a legendary creatureright? And we probably arenât visiting Ravnica again soon, so a Commander version may be one of the few chances we have to see a Fblthp get printed any time soon!

The Goblin Krark is so famous that a Clan of Goblins follow his example out on Mirrodin. He was an explorer, an exemplary Goblin, and a really interesting character. I think we could use another serious legendary Goblin. Not some weird and bizarre Akki, Boggart, or silly little dopes. Nah, a real explorer who documented his journey in a book. Goblins for the win!

Much like Ramos at #10, you might be surprised by the depth of Belbe. The daughter of Eladamri was killed and the body used to create Belbe by the Phyrexians. Her role on Rath is to determine who will rule, and support them. She is the kingmaker. (Or Evincar-maker if you prefer) Post-Volrath, there are three people vying for control of the plane â Greven il-Vec, Crovax, and Ertai. Two of those in post-Phyrexian modified states (not Ertai). Now her and Ertai have a romantic thing going, so she is inclined to help out Ertai. She is pushing against Yawgmoth and the Invasion Plans he has in store. She wants to diminish the flow of flowstone, thus preventing the Planar Overlay. She had the Eye of Yawgmoth as part of her body. After Volrath returned the plane and challenged Crovax, Ertai helped to slay him and Crovax was crowned Evincar by Belbe. Then Belbe reunites with her father, Eladamri, and finds out who she really is. She turns off the Eye of Yawgmoth, opens up a portal, and Lin-Sivvi, Eladamri, and Takara flee to Dominaria to prepare for the upcoming Invasion. But Eladamri canât ignore what his daughter has become. Before he flees, he kills Belbe. And thatâs a cool character, that could be a cool card.

Zagorka is an interesting character. She is connected heavily with Magic royalty. For the two back to back blocks that confusingly started with âOâ (Odyssey and Onslaught, if you werenât paying attention) we started with Kamahl and Jeska as Barbarian brother and sister. And then Kamahl goes all angry Druid and Jeska is cursed by the Cabal to become Phage the Untouchable. As Phage, she kills Ixidorâs love, and Ixidorâs greatest creation, Akroma, is not happy. She comes a-hunting no-longer-Jeska Phage, leading an army created by Ixidor. Meanwhile, Zagorka is the protector and leader of an asylum for folks fleeing the wars between the Cabal and Akroma. On a major battlefield, all three women are present as Kamahl arrives and slays them with a sword he made, and their three deaths mingle to create the Karona, False God. So you can see the royalty there â Akroma, Phage, and Zagorka all make this superpowered character when they die. Now both Akroma and Phage have each carved out very flavorful, powerful, and huge swaths of fandom. Hereâs hoping Zagorka could do the same! As a protector, I could see her as Green maybe. Or even R/G to have one color of her allied against each of the Akroma/Phage War. (I could even see her as a wedge character of Green/Red/Blue. Why? Because the death of all three creates a creature thatâs all five colorsâ.â.â.â) 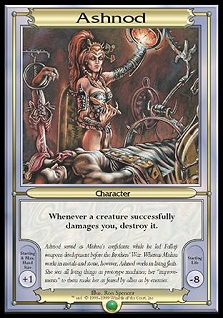 I have a real fondness for Ashnod because sheâs really interesting. She was Mishraâs top apprentice and right hand. She was a person who had no qualms about doing things that were torturous and immoral for her research. She had a very dark side. And yet, when she found out what had happened to Mishra, and how far Mishra had fallen, she turns against him. She secretly feeds a super powerful artifact to Urza to end the war and Mishra, and even sacrifices herself to our #1 person below to ensure that Urza would win. Thatâs an interesting character. Given that her cards sacrifice creatures for mana, turn normal creatures into artifacts, and can pump a creature up in the front only to wound them in doing so, she seems really Black to me. I think you could do an interesting take on her. 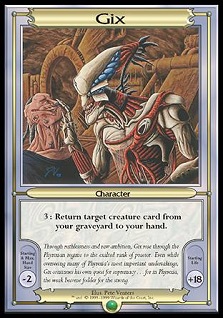 Gix is one of the big bads of Magic-dom. He is Yawgmothââs Praetor. Heâs one of the main antagonists of Antiquities story line and early books like The Brotherâs War, as well as a later foe of Urza again in his Block. This Phyrexian Demon was originally the leader of the fight against Yawgmoth on Dominaria, before being changed, and then become Yawgmothâs right hand. He is nasty, and is one of the major antagonists towards many characters, and killed a lot of folks, like Ashnod and Xanchta. I think an uber-powerful Phyrexian Demon Praetor would be extremely compelling.

Now I donât want Yawgmoth. You could not do him justice. There is no way you could print Yawgmoth, who has never even been depicted in card art. Any card would be a major disservice to the story and character. Just say no to Yawgmoth.

On the other hand, we have a Mishra, Artificer Prodigy to use. But I would love to see a Fallen Mishra, after he has been Phyrexian-ified. That would be sick.

Oh, and honorable mention to Tourach, founder of the Order of the Ebon Hand.

So what did you think of my list? Was there any other non-Planeswalker characters you really wanted to see get printed?