Hello folks! I hope your day is going well. As you may know, I recently spent some time in Iceland for 10 days, and I wanted to do a quick little article for you inspired by my trip. I am researching this article and coming up with my cards now at a café in Reykjavik called Kaffi Brennslan. It was the first place I ate at here, I figured it would be a suitable departing point as well.

When I pen a Top Ten article I don't just write a little "Abe's Quick Takes" and then hit the send button and move on. I spend time with the idea. I research it. I sit with it. I write it over days. As I write it, I often realize that I need to add something different or change my initial order. Sometimes I'll even abandon a project if there wasn't enough there for a Top Ten list. For example, I put about two hours and 800 words into a piece called "The Top Ten Flavor Fouls of Guilds of Ravnica" where I looked at cards that didn't look or feel Ravnican to me.

Such as Pelt Collector. It's in the dark woods, collects pelts, and then has a gothic structure way back in the back. That name, art, and such don't feel anything like Ravnica to me. But I only had 4 real cards that struck me as issues, so I gave up the piece and moved on to other topics, as there wasn't enough meat, and I never want to cheat you by only having 5 or 6 real things at the top of the list and then a bunch of junk that just gets to that magical round number of 10 for the clicks.

I wanted to research some Icelandic cards to see what I could unearth, as well as come up with my initial Top Ten List at the Kaffi, and then I could write it up later.

Here were the places I wanted to dip into. Note that I expect that an Icelandic feeling set of cards is going to be mostly Red with touches of Blue and Green. Very little Black or White are going to be here, this is the land of volcanoes and geothermal activities and more. It's a land of Mountains, on an Island (and a chain as there are a bunch of other smaller islands here too) so you'll see the occasional dip here and there into other colors! But is, and should be, a mostly Red-ish list....

...like this Mono-Red Fire. And that Ice thing too! They are both pretty good. Iceland is, indeed, the land of Fire and Ice. Nothing says that more than this card! I was in the Perlan Wonders of Iceland museum and was reminded of this as there were entire floors dedicated to one and then the other. Glaciers meet Volcanoes, and become pretty close friends. While the name of this split card is perfect, the art is just neutral and could be set anywhere, so it's back here in Honorable Mention, but you love cards that are Red.... 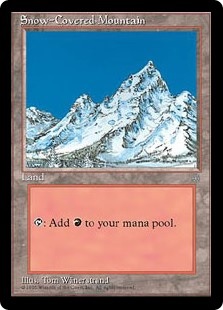 ...how about a Mountain instead? You may not have expected a basic land here! But you certainly should have! The Tom Wanerstrand art here perfectly sets the scene. You have an incredibly well-done mountain, and it's the sort of snow-kissed mountain you see in the background of every image, picture, and place I've been. Enjoy!

Oh, and we aren't just having cards that are Mountains...

...but also ones that mention Mountains as well! One or the other, right? Volcanic Eruption is arguably the best at showing the exploding of a volcano. Note that Iceland has around one volcano erupting every 3-5 years, and their last was 5 years ago, so they are due. I really enjoy the classic art here from Mr. Schuler! But, again, the art is a little too generic, so it's sliding back here at the back of the list.

Shouts out to Dormant Volcano and Peak Eruption that play into the "Volcano" theme too. I wanted more realistic ways to show erupting. Lava is used a lot, as is eruptions, but they are often heavy into the magic using lane. Here you go without that crap!

Duh. The best named card ever for Iceland. Now please note that it's hitting back here because the art isn't frosty, just generic. It's not as warm as Tropical Island, but hey, any boat in the stream.

A shout out to Caldera Lake too. We have a number of calderas with that same red-ish rock around, that you see here in the Caldera Lake. Nicely done!

8. Sulfurous Springs and Others

If you have ever visited Iceland, then you know two key things. Hot water everywhere smells like sulfur, and the geysers and such really smell like sulfur. Hence Sulfurous Springs! Don't wash with your silver jewelry on, it will tarnish.

We also have the sulfurous aspects here in these lands too. Sulfur Vent and Sulfur Falls both blend it with others. If the art and the flavor text of the Falls was better on line with the name, then it would have made the top spot, but it's not. The Vent is a very flavorful way of displaying Iceland too.

Oh, I was rapping my head trying to find an actual Geyser card that's not lava-fire based or something else but water/steam, and came up with nothing. If I missed it, let me know!

Forget that this thing transforms into an Eldrazi for a moment. Grizzled Angler perfectly matches the Icelandic need and thus love of fish, whales, shark, and more. It has a rotting shark that you can eat (hakarl) and they still hunt two species whales using annual quotas (which taste delicious, by the by; I tried whale steak and loved it) and more. This little Angler has been sailing the seas for quite some time. Enjoy it!

For all of your blasting needs, try Icy and Winter flavors! Because sometimes, you just have to tap some stuff down. I love that the art in here gives you a fun representation. There are times walking that you have this chilling blast of precipitation and you have to go run into the nearest store to slip away, which represents being tapped down. There you are!

The hot springs of Iceland are a key part of their culture. It's where they go to hang out and catch up. It's sort of like their version of the pub in the UK, where everyone heads to the same pub each day after work, before heading home to hang out. Many pubs in the UK close at 7:00 pm or 8:00 pm or so. Your local Jack and Jenny is for folks to unwind over a pint, not to stay out late and drink at. The Hot Springs serve a similar role here, they are your hangout spot, and I've seen locals in places just unwind and relax and talk of events in the past few days. Oh, and the name and art and flavor text are all perfect here. Enjoy!

Flowering Field is so pretty! Much like places in Iceland, you have pretty fields and plains that are great during the summer. Note that the art is perfect, with no trees in the picture anywhere (Iceland's trees were a casualty of colonization). You even have a mountain in in the background. Even the flavor text works! This is a nice hit.

Many Glaciers are thawing, not just in Iceland, but elsewhere. Iceland has more than 400 glaciers, and just a few years ago, the first glacier (Okjokull) was declared not-a-glacier anymore due to its shrinkage. As global warming continues, the thawing of glaciers will continue, and thus this is the best Glacier card to show you! The art for this online Vintage Masters version isn't bad either, and you get a fun ability to boot.

While Thawing Glaciers probably best represents Iceland today, there used to be more. Here are some other cards that shows Glaciers at their peak!

More than mere water falling from the sky in the form of hail, snow, sleet, and rain (all of which we had while I was there) was the driving wind that really pushed things around. On my first day in the nation we were under a Gale warning. There were times on day-trips to places like the Snaefellsnes Peninsula or the Golden Circle of key sites that the wind was so bad that it prevented more than a rudimentary jump out of the van and then back in again. On those days, the wind would often die down and allow you the freedom to not worry about rain coming from the side, but you get the idea. That's why I enjoy Snowblind as a great way to show it. Not pretty little snow. Wind-driving madness.

#1. Fissure (With a shout out to Aftershock)

Fissure is the perfect Icelandic card. It looks like some dangerous spots in Iceland. This island is on two separate tectonic plates that are pulling apart, thus the big seismic activity, and there is a fissure between the plates that can be explored or walked into as it's huge. It's a key part of the region and the island, and leads to much of the volcanic activity, and eventually, there will be two Icelands, not one. Thus the Fissure card, which is pretty useful as a way to destroy any dork (or land) at instant speed. While the art and flavor text may not be as good, Aftershock is another strong card for your consideration.

Shout out to Earthquake, Thermokarst, and Alpine Guide.

And there we go! What did you think? Anything I missed or didn't think of? Anything in here inspire you? Are you going to try and build an Icelandic themed deck? I hope you enjoyed today!