The new casual format of Oathbreaker offers fresh waters for fish. In Magic, "fish" is an affectionate name for merfolk. A singleton format allows you to include all your favorite fish from Magic's history into one deck. Even better, in Oathbreaker players start out at twenty life, and aggressive tribal strategies win. Merfolk are a synergistic tribe. Their first and best lord swam in with the game's original set, Alpha. 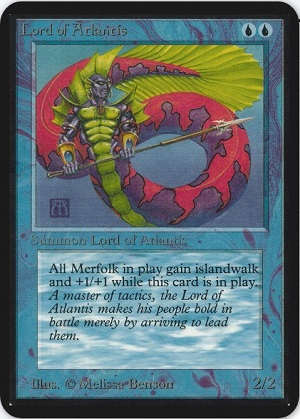 Lord of Atlantis was typed as a lord and not a merfolk so as to not augment itself. Magic nomenclature of 2/2's that buff others of the same tribe likely came from this first iconic fish. The earliest Magic play-testers assumed you would only buy one starter and were unlikely to have more than one lord in play. Gamers schooled them, and during the Grand Creature Type Update, the lord type was removed, and previous nobility were given errata to only effect other creatures of that tribe.

In this week's royal fishing cruise, we will tour the clear waters of two decklists. The Mono-Blue one will focus on the sleekness of the tribe and devotion, with balmy basics and sea gods. The second Simic build will highlight the slipperiness of fish, with islandwalk and other trickery.

Casual multiplayer formats are the place to include your pet fish. I have fond memories of Tidal Warrior as the first islandwalk-enabling merfolk that could also thwart an opponent's mana if you activated the ability on their upkeep phase. Be certain to include any other fish that you love.

Though I have played the tribe, I am no master fisher. To build these decks I consulted two experts. The first, Nikachu, Merfolk Master reminded me to put in the good cards: Cavern of Souls and Aether Vial. You can certainly play a casual format without those expensive enablers, but anyone who has done any swimming in Eternal formats should own multiple copies.

Our own Oathbreaker locket grants us card draw and resiliency against sweepers with Force of Negation. The exact Mono-Blue Planeswalker you choose does not matter too much, so if you prefer another Jace, play him. Jace, Cunning Castaway may appeal to some, though his +1 is a nonbo in a format where you attack opposing Planeswalkers half the time. You may want the extra pip of devotion from Jace, Wielder of Mysteries, but be certain to reassure your opponents that you aren't going to pull any Leveler shenanigans.

I picked Jace, Architect of Thought because he is not as scary as Jace, the Mind Sculptor. Drawing less aggro means your 'Walker will live to draw you more cards. The Architect's +1 is decent at protecting himself. If you select a more fragile Jace, I suggest considering Merrow Commerce to grant your school pseudo-vigilance. With the Architect of Thought, if you need to refill your hand, you may even find a political ally who will give you all three cards from the -2 in one pile.

Sweepers such as Wrath of God are less oppressive in Oathbreaker, but they are still played. Our signature spell can protect us from the first for free. After that, the commander tax kicks in, but a repeatable Negate is still potent in a format full of Planeswalkers and signature spells. We should have enough cards in our hand to exile thanks to Jace.

Speaking of free counters, you certainly can include Force of Will if you own one. It is suitable, though still not necessary, if your playgroup is more cutthroat. Should your opponents menace you again and again like a great White shark and you find yourself saying, "I'm gonna need a bigger boat," go ahead and include the Legacy Fish staple Back to Basics.

The most-played merfolk in Legacy was designed for casual formats. When you have multiple players, True-Name Nemesis is fair, and I only included the card because it's iconic. It won't dominate an Oathbreaker table, but, hey, at least it will give two pips of devotion to your gods.

The merfolk of Theros worship Thassa, and for good reason. She will wade through wraths from other gods and harpoon your opponents. I also wanted to get all the devotion synergies out of my system in this decklist because the next one will include Green merfolk with the styling of poison-dart-frogs.

Jace filled a roll in our last deck, but Nissa, Steward of Elements excels. You will most often wish to play her for X = 1 then immediately +2. From there she will put into play the majority (47/58) of your deck. This is far better than drawing cards. Nissa will give you a mana advantage every turn. Defend her with your fish at all costs.

To make Nissa as powerful as possible, I minimized the number of non-creature spells the deck plays. I still included Brainstorm, as it synergizes with Nissa's +0. Yes, I would like to place Lord of Atlantis on top of my library from my hand then reel him onto the battlefield with an ability that bypasses countermagic. Even better, tutor up your iconic lord from your library.

These heralds and Collected Company give you more ways to find your best lords. Then when all your fish have islandwalk, cast Aquitect's Will to generously give your opponent an island vacation. Unblockability is great in a format where you often need to kill Planeswalkers before they ultimate. It will also open up canals to kill your opponents in a single potent attack.

Thank you, Fishin: A Merfolk Podcast, for suggesting Surgespanner and Cryptolith Rite. They do even better work together. Searching up Surgespanner will give you an answer to problem permanents like Ensnaring Bridge (with some help from Kumena, Tyrant of Orazca).

Dorian of the Fishin podcast also wanted to see a self-mill build. You could play Jace, Wielder of Mysteries with Treasure Cruise and merfolk enablers such as Thassa's Oracle and Drowner of Secrets. I am not a fan of mill decks in multiplayer, strategically or viscerally. You, however, should build whatever floats your boat.

One last note: in the Mono-Blue variant we included Back to Basics as an option for fiercer playgroups. You can do something similar after giving free tickets to the Island basic land type. Follow up Aquitect's Will with Choke or Tsunami. If you decide to voyage on these rough waters, I would also swap out Cryptolith Rite for Spreading Seas. This strategy will only flood heavily Blue opponents. Otherwise, it will be pretty fair. We're only playing two Island cards in our deck, but you still may lose one. Again, only sail this route if you know your playgroup. Otherwise, people will get salty.

I wish you balmy waters. Do leave a comment with your best fish tale.