Good Commander decks play powerful cards. Wonderful ones build a symphony of synergy that dazzles the table and leaves them bowed and beaten. In the Sliver Hive, your snakey little forked-tailed darlings work together to create something beautiful. 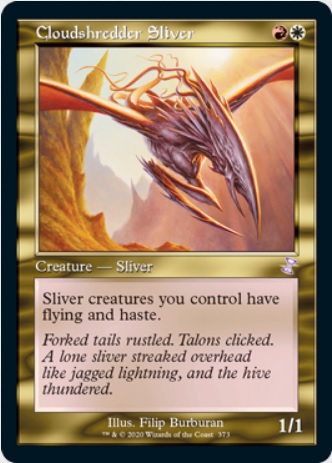 The reprinted slivers in Time Spiral Remastered have inspired me to write about this alien and awesome tribe. Though I've swarmed with the hive in other formats, we'll focus here on Commander, where your deck should include around thirty taloned friends. Now, I trust you already have the best picked out, your Sliver Legion, The First Sliver, Crystalline Sliver, and all the way down other top ten lists, maybe even top twenty. No need to talk about any of those (with one possible exception); the debate should be around slivers twenty through thirty. That's right, the top ten of the bottom, the humble slivers you may have overlooked but are clicking their beaks in eagerness to do good work.

Before we get to the list itself, I should mention a few rares. Synapse Sliver and Brood Sliver are both good; you likely know that. I believe they're underplayed only because of their scarcity, not because their power isn't clear.

Before I tell you what slivers I think you should add, I'll tell you what you can cut. The answer may surprise you. This breed of sliver is the most valued in competitive Constructed formats, but multiplayer is a different animal.

Muscle Sliver, Predatory Sliver, and Sinew Sliver all are iconic mainstays in Modern, Legacy, and Pauper. If you have an emotional attachment to these creatures, by all means play them. That's true of any card in Commander, but I love other slivers just as much and prefer my smaller ones give the hive more utility. The +1/+1 isn't meaningful. Neither does it lead to interesting gameplay. I do battle with Megantic Sliver because a permanent Overrun will make a difference, but at two mana I would prefer Spinneret Sliver or a slithery baby with even more utility.

You already know the blissful freedom Galerider Sliver gives to the hive, but you haven't truly lived until your Screeching Sliver interrupts a lesson from Vampiric Tutor. Brush those prized cards into your weeping foe's graveyard. And if you do win by decking someone, you have permission to perform a victory screech.

I see you with your Striking Sliver and your Venom Sliver, grinning wickedly, but don't forget the third wheel in Hunter Sliver. Better yet, you don't need anything other than a terrifying legendary sliver to feed on other hapless commanders at the table.

Short on lands? This good little pet will find them. Short on spells? This Red-scaled savior will rummage until you get them. Better yet, any slivers you discard can come back later after you cast Patriarch's Bidding or Haunting Voyage.

Like other rare slivers from the Onslaught block, the scarcity of this sliver may keep it out of some decks. However, of the slivers of that era and class, this is the least played and most powerful. Use Magma Sliver and your other searing symbiotes to pump your Commander to deal twenty-one damage out of nowhere for one blazing, game-ending bite.

This sublime sliver is one of my favorites and maybe it is yours too. I fear some hive lords take it out of their decks after one bad experience, such as decking themselves or being locked out of attacking ever again. Perhaps some young hivelings look at the defend ability and question why they would want it. Don't be fooled. Accumulating cards is what you want to do in early turns in Commander. Only once you have an overwhelming swarm do you need to attack. Why, you may even plan to combo kill with Lavabelly Sliver, Basal Sliver, and Sliver Queen. But you don't have to get such a specific sliver sequence to profit off dormancy. Draw as many cards as you require then wake up the hive by sacrificing Dormant Sliver to one of the three next cards on this list.

This isn't to say that Darkheart Sliver is stronger than Dormant Sliver, but it is more underestimated. Every sliver in this top ten is worthy of a deck slot, and too few lists include Darkheart Sliver. Masters of multiplayer understand that you want multiple ways to sacrifice creatures, in case an opponent tries to steal your commander or lock it out of play with a card like Lignify. And, hey, in response to a Damnation you can go into the Dark Heart of the Wood and feast.

This sliver may be small, but make certain it blazes its way from your draft chaff into your ninety-nine. Haste is a strong ability when combined with your commander or other better-loved cards like Gemhide Sliver. Also, these sacrifice outlets can help your swarm come out on the better side of a Living Death. Also, you can pump your commander for a lethal attack if that's the best option.

Once upon a time, Frenetic Efreet was the top-played creature in tournaments. Frenetic Sliver has the same chance to frustrate your opponents, making their removal and board wipes only half as effective. You can even use it to put your Dormant Sliver to bed for a turn or more. This is one sliver I play in competitive formats that is just as good in casual. And, yes, it works with Dregscape Sliver.

If you simply did a Scryfall search for slivers, you may have forgotten the changelings. Realmwalker and Masked Vandal are the best for multiplayer. I would also consider Unsettled Mariner, Mirror Entity, and The Bears of Littjara. The last can maul and opposing commander and leave you with a 4/4 sliver angel. Not bad for three mana.

Surprise! For this top slot I chose a plot twist: a sliver you're likely already playing. Even so, I think you're not giving this legendary sliver enough credit. Your foes want nothing more to blow up your hive with Wrath of God. Sliver Hivelord stops that from happening. Sure, it doesn't do the flashy things other legendaries can, but that doesn't matter if you get enough slivers to live. You'll go over the top with synergy.

I wrote an article about a brutal way to build around Sliver Hivelord. Even if you don't go full sliver apocalypse, do try a few games with an indestructible commander. Not only is it strong but it might just be more fun. Sliver Overlord can lead to repetition, if you always search up the best slivers or the same win conditions. The First Sliver is a great choice, but getting more eyeless pretties onto the battlefield isn't helpful if they all die in a Fumigate.

Top ten lists are great for generating conversation. What is your pick for most underplayed sliver and why?