Magic: the Gathering is more than a game. A decklist is a blank page ready for your story. Casual formats such as Commander encourage this self expression, giving you a larger card pool and fuller palette. The better story your deck tells, the more of your cards people in your playgroup will want to see on the battlefield. If Scheherazade could string a murderous prince along for a thousand nights, you can do the same with cohesive flavor long enough to win a multiplayer game. Fun, original cards like Dandan have their place in winning strategies just as much as staples like Rhystic Study. This is true in Commander as well as the new casual format Oathbreaker.

In Oathbreaker, there is no Gatewatch. It's every Planeswalker for themselves. Jace against Liliana; Ajani against Kaya; and Chandra could even fight Nissa, though that would never happen in true Magic canon. Never! #Gruulfriends

Today's Oathbreaker deck tells a tale that could be true in Magic lore, or at least mostly. It's a sea story, you see. Kiora, Behemoth Beckoner travels the planes and plumbs their deepest oceans, seeking the vast beings that live in the briny dark, rise with geysers, cascade waves with their wrath, and flood the land with their awesome presence.

Kiora came to the plane of Theros seeking a sea monster powerful enough to fight the Eldrazi ravaging her home of Zendikar. Being short on time and deep on need, she decided to stir the pot of Theros's oceans.

No sea monster rose to the occasion, not then, but she did attract Thassa's triton followers. They mistook her for an emissary of their god. Something of Merfolk Trickster herself, Kiora deepened the deception. She even fooled Ajani and Elspeth, telling them she was a legendary mariner who had sailed to Nyx, the starfield of the gods. Using their living ship, the Monsoon, she navigated to the lost island of Arixmethes. Legends told of a powerful city that had disappeared from the map. Kiora knew the power came not from the people who lived there but the isle itself.

At last Kiora had found a being to rival the Eldrazi. Arixmethes swam with the might of the ocean, could drown coasts, devour cities, and wash away history. Kiora would do anything to claim that power, even if it meant dueling a god.

You can read the tale of their sea battle here. In the end, Kiora did not succeed in wresting away Arixmethes from Thassa, but the mortal did steal the god's bident. Kiora used the artifact back on Zendikar to summon Lorthos, the Tidemaker.

You can use it in your own games of Oathbreaker to draw cards, play more lands, and clean the battlefield turn after turn with Whelming Wave. The sea monsters of this deck may be less strong than those of others you face, but your creatures will be richer in briny flavor. They will inspire Kiora, Behemoth Beckoner, and she in turn will help you summon them. She can upwell multiple mana depending on the land you untap. Her favorite enabler is of course Arixmethes, Slumbering Isle.

The deck wishes to accelerate from one mana to three, to cast your Oathbreaker on turn two. For that reason Birds of Paradise outperforms Kiora's Follower. Feel free to include the Follower, or any other card, if you wish for flavor. I preferred Dandan, one of the first Magic cards to pull me into the game with its siren song. Though both Birds of Paradise and Dandan will return to your hand after every Whelming Wave, they have rolls to play: acceleration and repeated card draw.

All other creatures in the deck can dive beneath the Whelming Wave, and when the waters clear, they will swallow opposing Planeswalkers whole. The sea monsters admittedly are ponderous in the open ocean. They'll need your protection. Interaction such as Swan Song and Stubborn Denial will stop your opponents from sinking your battle plan. Also, don't forget that Kiora can untap one of her tentacled-and-or-finned friends to protect herself.

If you wish to spend more money to increase your deck's power, include Mana Drain, Force of Will, and other free counterspells. Cut Dive Down and the maindeck Kiora's Dambreaker.

To bring the price down to low tide, replace the more expensive lands with Simic Guildgate and Temple of Mystery. Weaker cards may serve you better if they are fun and flavorful. Include your favorite sea monster, even if it's nary to be found on EDHREC. Did Marjan lure you to the darkest depths of wonder? Did Leviathan leave you open-mouthed as a kid? Play it. Remember, Magic is a game, and if you've used it to create something beautiful and true to you, you've already won.

Leave a comment for other cards you would love to include in the sea garden of Kiora, Behemoth Beckoner. And if you have any multiplayer sea tales of your own, do share them. 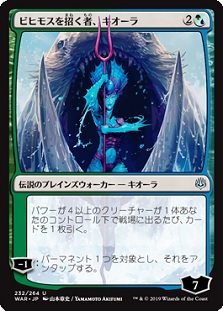