Jumpstart is a new and easy way to play Magic. Instead of taking the time to draft or build a Limited deck, you and your friends can simply shuffle two packs together and begin battling. Wizards of the Coast designed each pack with a specific theme, often tribal, and there's nothing to stop you from creating your own to customize your play experience.

In my experience, Innistrad was one of the best Limited formats in all time, in part because of werewolves. Though few saw play in Constructed, in forty-card decks they had real teeth. A werewolf on the battlefield adds a unique horror to a game of Magic. Your opponents begin to sweat, knowing they must cast a spell every turn lest your creatures transform into monsters. Just as Innistrad townsfolk dread the coming of nightfall, your foes will fear you reaching into your sleeve to flip your cards to their more fearsome side.

Most frightening of all is the full moon. That's when you force your werewolves to transform by passing the turn without casting anything. It adds another original decision point to a game of Limited, to waste a turn worth of mana to upgrade your creatures. Instant spells enable these full-moon turns by allowing you to pass, get all the benefits of transform, and still use your mana this turn cycle. Because of this, even bad instants are good with werewolves.

Boiling Blood will often only be a cantrip for three, but it can two-for-one when paired with werewolves. Passing without a play will transform your Hanweir Watchkeep into a Bane of Hanweir, which would like nothing more than to devour a creature forced to attack. Other instants are even stronger with werewolves, and I've included them sparingly in these werewolf packs for this reason.

Another way to use mana on a full-moon turn without casting a spell is with activated abilities on creatures. That's why you'll often see them on Innistrad wolves, such as Ember-Eye Wolf and Kessig Wolf. These cards enable their howlpack friends without ever having to mention werewolves. Though Ember-Eye Wolf will do great work in the hunt loping alongside once-human brethren, alone it's rather sad.

Smoldering Werewolf, on the other hand, is ferocious. The werewolf horrors are nightmarish in their synergy with conventional human howlers. I hesitated to unleash any eldrazi, as we always must when dealing with cosmic horrors beyond our understanding, but I was too tempted by their activated abilities. I had to include them in these packs. The full moon never feels more glorious than when you tap out - not to cast a spell - but to transform a werewolf into something otherworldly and beastly.

Now that I think of it, Smoldering Werewolf sounds like the title of an urban fantasy novel. In that genre, a woman protagonist typically kicks ass alongside supernatural studs. Whether or not you get steamy thinking of eldrazi werewolves is really none of my business. Personally, I will say that adding cosmic horror onto a creature type that already is nightmarish is like putting bacon on your cheeseburger. In my view, it's disgusting, and again, I would avoid eldrazi werewolves if not for that savory, savory synergy.

I will present another pack with them, this one Green, but first I wanted to address the rhino beast in the room. Sanctuary Smasher also enables werewolf transformation with its cycling ability. The first-strike counter can serve as a combat trick, without counting as a spell. Cyclers shine brightest under the light of the full moon.

Depending on how deep the card pool is, a theme in Jumpstart can span one to four packs. I found more than enough slobbering fiends to build four for Werewolves, but you only need to sleeve up as many as you like. Also, every one out of four Jumpstart packs includes an additional rare, so I added one to this pack. That will make it stronger and add to the variance of your Limited play. You'll be more excited to shuffle this one into your deck, and your opponents will learn to dread it.

That said, we must consider balance. If, in your play, decks made up of Werewolf packs dominate then we will need to ratchet down their power level. That's something I would like to have tested myself, but like many, I haven't been able to secure Jumpstart packs. As their print run isn't limited, they should return to the shelves at a fair price. Until then I will do my best to theorize balanced packs. If you find Werewolves to be too strong, reduce the power and number of their enablers. You can substitute in wolves without activated abilities, such as Arlinn's Wolf and Brazen Wolves.

Wolves with activated abilities, such as Darkthicket Wolf, were designed with werewolves in mind. Adding more of them would make the packs even stronger. The same is true of wolves with flash. They will leap out of the woods under the light of the full moon, their fur gleaming, slaver shining, and when joined by their werewolf kin their howls will become a chorus of primal hunger.

You may have expected to see Nightpack Ambusher in this pack, and you could certainly include it. It's an obvious choice and also not too expensive. I simply chose Spirit of the Hunt because it's another wonder wolf you may have forgotten about.

Mayor of Avabruck is slightly more expensive. Whenever possible I'm trying to make these Jumpstart packs extremely budget. Beyond that I found the rare wolves with flash to be more exciting. But if you have fond experiences racing through the woods with Howlpack Alpha and his wolf kin, you should naturally include him to relive that thrill.

After a few invigorating games of Jumpstart, you'll want to deconstruct the decks back into packs for later replay. This will be easiest if you've chosen lands unique to the specific theme. For Werewolves, I would prefer basics from the Innistrad blocks. CoolStuffInc stocks foil ones. Here are the forests, and here are the mountains. 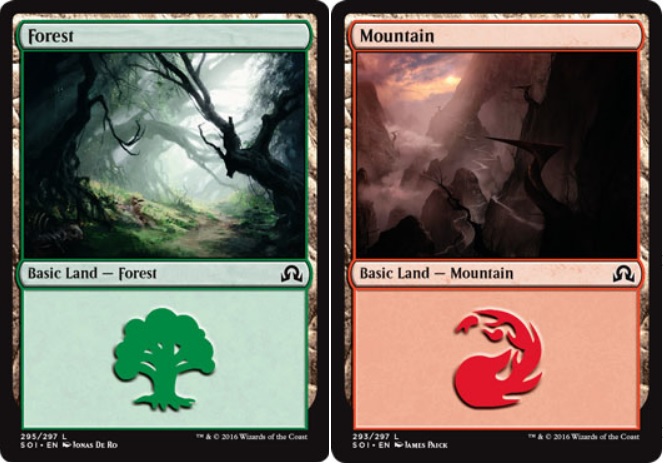 These lands feature a stalking darkness most suited to our theme. We can well imagine ourselves in these woods and rocky passes, glimpsing a shadow drawing closer. What was that? Did we just see two eyes glinting with Red hunger and Green savagery? Suddenly the narrow road we travel feels less safe, and we hurry on to find safety before dark.

One card I safely left out of these packs was Huntmaster of the Fells. This mythic werewolf was the only one to see serious Constructed play. It's an order of magnitude more expensive than other werewolves, but even more importantly, it simply does not fit. Jumpstart packs really need to be mono-colored. If we start creating multicolored packs, shuffling two together will create a deck with three or more colors. That is awkward with Limited mana bases.

True, one of the official Jumpstart packs is five colors. Its theme is Chromo, with fixing. I will avoid building multicolored packs unless it's intrinsic to its theme. Luckily, with Werewolves there's no need. We have more werewolves than you could shake a silver-tipped stick at. If you had your heart set on playing

Werewolves, you can always hope to shuffle two lycanthropic packs together. I admit I would covet a deck with a purebred theme, but much of the fun in this format is seeing combinations you never imagined before, such as Werewolves and Unicorns, Werewolves and Archeology, or even Werewolves and Dogs.

Whatever combination you roll, Werewolves will be a terrifying addition to your box of Jumpstart.