In the new Limited format of Jumpstart you open two packs with random themes, such as Elves and Goblins, and stitch them together. By shuffling them you create a new being, a deck of disparate elements combined into something original and wondrous. Some might call it madness, but for you, it's a calling.

On the plane of Innistrad, a skaab is a zombie built out of multiple corpses. If Elves and Goblins existed in this world they could, for instance, be grafted together into something with twelve goblin arms for grabbing along with an elf's keen ears and eyes. These marvels of flesh are crafted by skaberen. The most famous and skilled of these misunderstood scientists is of course Stitcher Geralf.

Today we will research new zombie packs to expand your Jumpstart experience. The first two will feature Blue creatures, for science!

A skaberen needs the right resources to succeed. Fully stock their laboratory by filling their graveyard with creatures, with the help of Armored Skaab and Screeching Skaab. These helpful undead servants will drag in critical components. A professional skaberen knows there's no such thing as too much brains. That's why she or he keeps extra stocked in vats.

Once you have all your ingredients waiting in formaldehyde, you're ready to innovate. Design your very own Stitched Drake. Cackle as it takes to wing amid a lightning storm. You should be proud in what you've achieved, a potent creature in a color that is known for the opposite.

I would be remiss if I failed to mention Stitcher Geralf is the character who drew me into cosplay. Roleplaying as him was a delight. His excitement in his work was electrifying. And I could rant against the superstitious peasants afraid of the science they don't understand. Sadly, this sort of distrust toward scientists is all too resonate with our society, and I would argue we're suffering for it now. 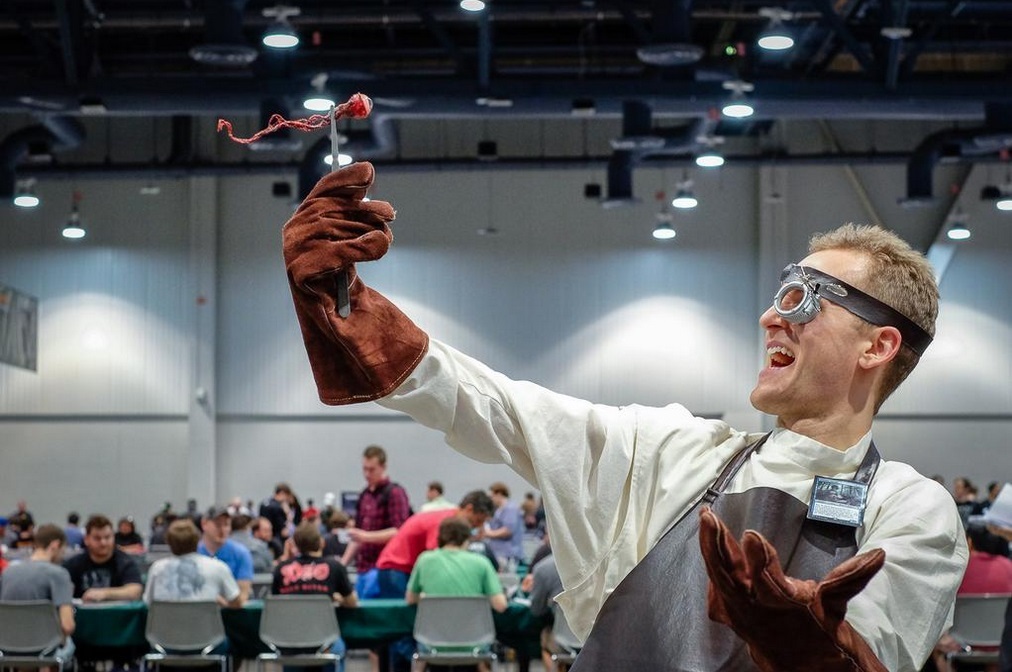 The card Stitcher Geralf is paired in this deck with another rare skaberen, Havengul Runebinder. The Blue Zombie theme has a relative abundance of rares and mythics, and I wanted to include more rather than fewer. Since these packs lack removal, I don't think they'll be too powerful, but if you find that to be the case you can downshift one of these rares to Relentless Skaabs. To increase the power, replace Stitcher Geralf with Geralf's Masterpiece. Also keep in mind the rare Forgotten Creation. I didn't include it in either pack, but feel free to rotate it in, as it's brilliant.

This second pack includes double the Deranged Assistant. If you've ever felt you've been exploited as an intern, you likely can relate to Garl. But you should know that Garl is donating his grey matter for an especially important cause, for science! There's no finer helping hand around the operating table. Stitcher Geralf should know; he sewed it onto Garl himself.

In this pack Deranged Assistant will enable our skaabs and accelerate them. He can also mill away unwanted cards after we Brainstorm. Handy with the shovel, he can unearth cards like Advanced Stitchwing, which we can then deploy onto the battlefield as quickly as turn three.

Flying is an additionally important keyword in this pack because of the rare Undead Alchemist. An evasive threat can get our token horde going. After a few swoops from your flesh kites you can amass a ground army to rival your nefarious sister, Ghoulcaller Gisa, no matter how much she cheats.

Speaking of Black zombies and the necromancers who love them, I also wanted to revisit the color and craft two new packs. In the original Jumpstart, there are four packs of Minions that feature zombies, often being sacrificed. You'll see the same theme here but with more zombies and different payoffs.

This pack is a cemetery full of zombies that love to be sacrificed. Doomed Dissenter plays like Butcher Ghoul, getting stronger the second time around. Imagine a zombie movie where someone says, "Is it dead?" Of course not, and it's hungrier than ever. And on the topic of horror movies, we have one evil Black Cat ready to cross your opponent's path, sooner rather than later if you have a sacrifice outlet. You could even potentially kill your cat at instant speed during their draw step (you monster).

Like in the Minions packs, not all of these cards are zombies. But Deathmark Prelate certainly knows his way around a crypt, and Kjeldoran Dead are also most at home among the gravestones. In this case the most respectful thing you can do to the dead is sacrifice them. And the omnipresent death will fulfill the Quest for the Gravelord and help you draw cards with Midnight Reaper.

For variety, you could substitute in the rare Plague Belcher. I will say that in my zombie play I've always found Noxious Ghoul to be one of their best tribal cards. Because of that, it's also scarce, but if you feel either of these packs needs a power upgrade, search one out.

This next pack takes a different dilapidated pathway between the crumbling headstones. Instead of sacrificing zombies, we're discarding them for benefit. Building this one set my hair on end; I was nervous about the balance between discard enablers and payoffs, but, in the end, I dug up something I could be proud of.

Haakon is our most obvious payoff. After a symmetrical discard effect from Miasmic Mummy, returning our zombie knight to play is pure card advantage. After that, a recursive 3/3 in Limited is nothing to sniff at, especially since you don't want to breathe too deeply around these corpses.

You'll want to pair Haakon, Stromgald Scourge with as many knights as you can. The classic combo with Nameless Inversion is far too strong for this format. Foulmire Knight is much more reasonable. You can keep summoning the knight to the battlefield, though you can't go on an adventure from the grave. You may have expected to find more knights in this pack, but including them would likely mean cutting discard outlets. I was more concerned about leaving Haakon rot in my hand as a dead card. But you can hope for more knights from your other pack. That's the joy of Jumpstart. Nothing will feel better than reanimating a White knight.

Beyond Haakon, we're interested in entombing cards with unearth, like Grixis Slavedriver. Doing so will send a chill down your opponent's spine, as returning this zombie giant to the battlefield will create immense pressure, and it'll even leave behind a zombie token. Adept necromancers will want to make use of the unearth creature after the combat step, before it'll be exiled anyway, by sacrificing it with Bone Splinters.

Corpse Connoisseur is another hasty threat that further enables you. Search up Haakon or his knight friend. You could even tutor up a rare from your other pack then bring it back with Grave Scrabbler.

I am cackling like Ghoulcaller Gisa to include a pair of morph zombies. Boneknitter adds some scary zombie synergy to the deck, and Putrid Raptor enables our main strategy. Its unmorph cost requires you discard specifically a zombie. Because of our undead raptor's particular taste and because most of our other discard outlets require tapping out, I shied away from cards with madness. The only one present is the iconic Grave Scrabbler.

Well, that's more zombies than you can shake a machete at. What themes should I include in next week's packs?