If you've played much of the new Limited format of Jumpstart you've likely realized that Planeswalker packs are the best. Not only are they fun, but they also tend to make the most powerful decks, since they include both a rare and a mythic Planeswalker bomb. Now, as much as I think about pack balance, it's fine for the less common packs to be stronger and more exciting. This is especially true when they revolve around flagship characters like Planeswalkers.

This week I'm making four of my own Planeswalker packs, in part because a commenter suggested the theme. (Leave your own suggestions at the end of the article.) Also, I am a fan of these characters, and the card type brings a unique element to games, usually terror. But I've chosen Planeswalkers that are less oppressive and less expensive. My goal remains for every pack to be budget, not much more in singles than what an unopened pack costs. That precludes most mythic 'Walkers, but the uncommon ones are perfect.

I like creatures with big butts, and I cannot lie. Huatli, the Sun's Heart adds an interesting inflection point to the game. Suddenly, it's all about that toughness. She encourages her best friend, Runic Armasaur, to smack a fool with that spiked tail. We can increase the hilarity further with Spitting Slug. *Patooie!*

Should your opponent remove Huatli from play, you can still win. There's some redundancy with Assault Formation, but even without, you may be able to rely on the creatures from your other pack to attack. Also, imagine some of the fun combos with this pack. Combine it with Mill, and these big butts will distract your opponent for long enough to grind them out. And Huatli could do good work with White's Heavily Armored.

Speaking of White, I like this archetype enough to have designed a second pack. In White I had more options with high toughness and was able to make it more dinotastic. In the Green pack I only had Runic Armasaur and Atzocan Archer as friends from the Warrior Poet's home plane of Ixalan. The following pack is more of a paddock filled with dinosaurs ready to burst out and eat all the tourists, or at least squash them.

If you can pull your eyes away from the bounty of dino derrieres, you'll notice I've included a second Huatli, the Sun's Heart. Jumpstart packs sometimes feature two copies of a card, and I don't see any harm of it being an uncommon, as long as it counts to the four total. It's far more balanced than a mythic Planeswalker pack. If you don't like this sort of double-dipping, you could play Gauntlets of Light instead. Fair warning, I do the same thing in the next pack too, and I regret nothing.

If you want to hew even closer to Ixalan, you can swap the rare for Slaughter the Strong. It's more expensive but portrays a dinosaur trying the weather an extinction event, no doubt with the help of Huatli. The Warrior Poet can inspire with words, and I ask you, what's more inspiring than fit dinosaurs?

"Friends, let us soar as the pterodon,

Being near to the gods, flying above all,

Taking pleasure in the sun,

We dive to feast, or to startle, we shriek-

Laugh and beat a maelstrom of wings."

"Your feet shake the ground.

Your spears are part of you.

And you are strong."

Better believe I'm not missing the opportunity to write dino poetry. But let me see, we should likely explore the next pack. This one takes us far from Ixalan's sunshine, down into the moldering undercity of Ravnica.

Vraska is another of my favorite characters, especially here, where she's resplendent in fungus. Though she's Queen of the Golgari now, remember before she was the master of the guild of Ochran assassins. With every completed contract, her deathtouch creatures get stronger, and they have the incidental upside of being able to one-shot those pesky mythic Planeswalkers.

I tried to include an interesting spread of poison. Thrill-Kill Assassin presents an exciting choice. Void Beckoner is a wild combat trick that's even more fun if you play him out as Spacegodzilla. The pack also is full of Vraska's gorgon friends, which she elevated in the Golgari court to equal rights to elves. Predictably, the elves were angry because to the privileged, equality feels like oppression.

For the last deathtouch creature, I added Moonglove Changeling, in part because its art is exquisite, but also the changeling will synergize with the other tribal packs. In fact, I'll look to include more changelings going forward.

For variety, you could swap out the rare for Ogre Slumlord, Xathrid Gorgon, Hythonia the Cruel, or even Vraska, Scheming Gorgon. These would mostly increase the power level for the pack. Overall, I likely overvalue balance, when the focus should be more on fun. That said, if you want to consider other cards that would downshift pack strength, I suggest Shambling Attendants, Skeleton Key, and Ochran Assassin (replacing Blood Curdle).

I am less concerned about balance after playing the original Jumpstart, where some packs seem much weaker than others. The Spellcasting packs, in my estimation, are particularly underpowered, especially the one with eight creatures. Adding more prowess creatures doesn't help if you don't have enough non-creature spells to activate them. I would prefer a deck with fewer creatures and more spells, though I recognize that can quickly become too strong if those instants and sorceries are all removal.

This last pack is me trying my hand at a spell-heavy pack. Is it balanced? Possibly, but what's more important is how enjoyable it is, and here I'm confident. This one features Jaya Ballard and my top picks for her flavor text.

You'll note that only three creatures is far less than the average pack. But I believe we need extremes like this when your second pack is likely to have more creatures and fewer non-creature spells for prowess. In this pack, though, the focus is less on synergies and more on hilarity. I merely paired bad cars like Sizzle (with great flavor text) with good cards like Incinerate. They should average out to a reasonable play experience, with a memorable theme.

The passive ability of Jaya, Venerated Firemage has the most dramatic effect amplifying Red sources that deal a single damage. That's why I included Power of Fire and Flamekin Spitfire. Even Blindblast looks potent with her in play. Because this Jaya is strong in Limited, and we have two of her, I searched for a rare that was less powerful. I found the perfect one in a Seventh Edition Inferno. 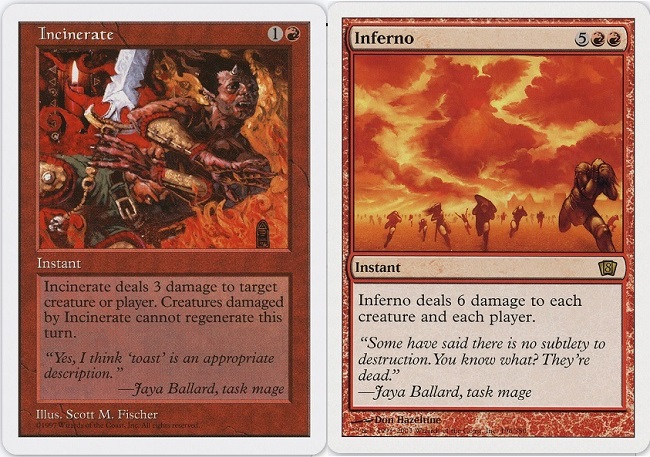 If I missed your favorite Jaya flavor text, do include it in your pack and as a comment below.