You've likely felt it too, that slipping feeling of falling backward into darkness. Nothing is right, and it's getting worse. Something squirms in the corner of your eye. Your headache pounds with a rhythm that seems to have its own sort of malevolent intelligence, and in the distance you hear a sound like the droning chant of, "Emrakul! Emrakul!" 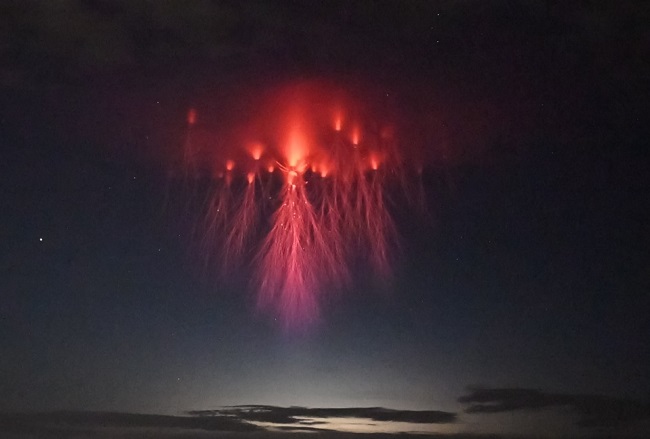 S Hummel captured an image of what he thought was a Jellyfish Sprite electrical discharge, but we Magic players will have very little trouble recognizing it as Emrakul. Of course, the Eldrazi titans would choose 2020 to annihilate our plane.

But before the end of all things, we can at least get a few more games in of Jumpstart. In this new Limited format, you shuffle two packs together and start playing immediately, and that's great. We have no time to waste.

Ramping into enormous colorless creatures? How typically Eldrazi. For many, Rise of the Eldrazi was their favorite Draft format, and this pack is a direct callback. No, you won't see any of the mythic-rare titans in these packs, as I'm designing toward a budget, but the common and uncommons are plenty scary.

Once you summon one such cosmic horror, your foes should know they're doomed. As they try to muster their pitiful resistance, they should hear their worries manifested in the voice of a whiny kid from a B-movie, "Like it's going to matter!"

Protecting your ramp payoff is important. Though many important cards, such as Not of This World, are inexpensive, I also wanted to include the pricier Awakening Zone. Thanks to Double Masters, it's now affordable. Even so, I decided to go with From Beyond as our rare, for its additional utility and very reasonable price.

Between Rise of the Eldrazi and Battle for Zendikar we have enough alien monstrosities to build multiple packs. However, the difference between Eldrazi Spawn and Eldrazi Scion tokens prevents us from using some otherwise synergistic cards, such as Broodwarden and Deathless Behemoth. Make certain you distinguish between the tokens on the battlefield. 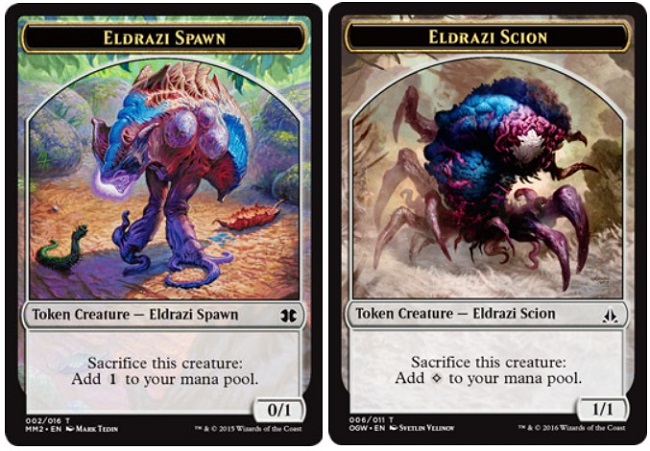 Our next pack continues the same iconic titanic theme, with a greater focus on sacrifice.

When people think of Black cards that enable Eldrazi, the minion that comes first to mind is Pawn of Ulamog. Unfortunately, it's for this reason that the card is scarce and expensive for an uncommon. You can certainly include the card if you own it. Otherwise, we're playing Sifter of Skulls.

On Zendikar, token Eldrazi paved the way for titans, but on Innistrad we saw humans lured toward the comforting oblivion of self-annihilation. An Overeager Apprentice by himself can summon Ulamog's Crusher on turn five. Or you can sacrifice as part of the emerge cost on Abundant Maw.

Though Eldrazi are best known for their enormity, the tribe can pursue other strategies. For the following packs we're focusing less on ramping into one apocalyptic threat. Rather than looming over our foes and shadowing them with despair, we're making them feel vile by processing their well-loved cards.

The synergy of ingest and processing is bizarre enough that simply following the game mechanics will leave you feeling unclean. Moving a card from exile to the graveyard seems like a perversion, and that's perfect for a tribe of alien beings that fracture both sanity and reality.

In this baffling game plan, Release the Wind fits right in. Use it when your opponent doesn't have priority to replay a creature. Then process it, while exuding a deep-throated chuckle. You can also cast Release to the Wind to protect a key Eldrazi, potentially rebuying an ETB effect, such as from Ulamog's Reclaimer.

The only problem with Release to the Wind is that it fails to match on flavor. Voidwalk and No Escape are far more suitable for Eldrazi, while providing food for processing. For a better match, you could play Delay. It's a better card, though pricier. Most importantly, it will still make your opponents feel polluted.

You may have noticed for the eighth land I've selected Crumbling Vestige. Not only is it on flavor, but it also provides colorless mana for Eldrazi. That said, I shied away from the diamond mana symbol in the first two packs. For the third, I wished to design one with multiple Wastes along with Walker of the Wastes.

Dear reader, I failed. The inclusion of Wastes and colorless mana requirements essentially makes the pack two-colored, something ill advised for Jumpstart. I could craft a mono-colorless pack, but all the Eldrazi enablers require colored mana. It would've simply have been artifact ramp, which I found unsatisfying. Instead I went with a pack with a more normal mana base in its lands but with many non-land cards capable of producing colorless mana.

Blue has the most interesting Eldrazi. Many in this pack produce colorless, enabling the inexplicable ability of Dimensional Infiltrator. Kozilek's Pathfinder is more straightforward but nonetheless powerful. Because I worried this pack may be on the weaker side, I added a second rare in Deepfathom Skulker, which is strong even if you lack colorless mana. If you wish, you could replace it with a second Spatial Contortion.

I enjoyed thinking about the adorable Hedron Crawler scuttling around, drawing grins, only to emerge as a beach-straddling Drownyard Behemoth. Unlike in the Black deck with its mana producers like Basal Thrull, here you can tap the Hedron Crawler for mana first then sacrifice it, to make the Eldrazi monstrosity positively affordable.

When calling forth these existence-warping horrors, never feel guilty. Like many human constructs, morality is an illusion easily ingested by your tentacles. Personally, I have but one regret. I didn't find a good spot for Idol of Oblivion.

No, that's not true. I have multiple Eldrazi-based reasons for remorse. To name another, I was dissatisfied with a Red-aligned pack with devoid synergies. If you would like to see it, leave a comment, but otherwise I'll simply wish you a tasty and satisfying end of the world.