Commander 2019 gave us powerful cards. It gave us strategically fascinating cards. And it gave us cards that are downright bizarre. Sudden Substitution is all three, and in the new format of Oathbreaker, we can build decks around it as a signature spell.

Have you ever wanted to take control of your foe's overloaded Cyclonic Rift? Have you ever thought to steal your opponent's most powerful creature and replace it with a lamb-toad-faced-whatever-that-is? And did you wish to do it faster than anyone can respond with counter-magic? If so, read on.

We will concoct zanier master plans with Nicol Bolas, Dragon-God to give our opponents game-ending spells like Final Fortune, One with Nothing, and Slaughter Pact. First, let's weigh anchor on the serious and lean into the card's hilarity. And what Planeswalker is more silly than shirtless Jace?

With Jace, Cunning Castaway, we can substitute our illusions for their most powerful spells, or for their Oathbreakers themselves. By stealing their Planeswalkers, we can also prevent them from accessing their signature spells. But they needn't feel bad. At least they got our illusion in exchange. Fair's fair. Wait, what's that you say? Our illusion sacrifices itself after being targeted? Since Sudden Substitution has two targets it will resolve regardless? And our opponent gets nothing but a spray of sea salt? Oopsie!

The illusions will also serve to pressure your opponent's Planswalkers. With them and the +1 of Jace, Cunning Castaway, you can discard some of the more, ah, interesting cards the deck plays if you don't need them right now to humiliate the opponent. But if you do wish to steal their Consecrated Sphinx, cast Taunt into Sudden Substitution. Then slide Taunt slowly, ever so slowly, to your foe's side of the table and say, "Would you like to choose new targets for your spell?" 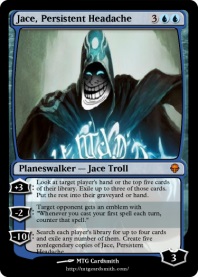 The X spells serve the dual function of being functional if we wish, or not if we cast them for X is zero. Once we do, the value of X is locked in, even when we exchange it for the best creature on the board. Another way to sunburn your opponent is to give them a creature whose upkeep they can't pay, such as Illusionary Wall. You can cipher illusions safely, as it's not targeted, but giving away a targeted spell to an opponent could cause them to pop your creature. Copied spells off cipher triggers and artifacts that cost zero are the cheapest way to enable Sudden Substitution. Artifacts like Darksteel Relic are mostly useless. And speaking of useless, the Lonely Sandbar in this list represents Useless Island, the place Jace plopped down on Ixalan after fleeing Nicol Bolas's mind drubbing on Amonkhet.

That Nicol Bolas, he means business. Just think of what such a nefarious plotter could do to his foes and their fragile egos with a card as brutal as Sudden Substitution.

Nicol Bolas, Dragon-God may be the most feared Oathbreaker, especially when combined with The Elderspell. Armed with a more whimsical signature spell, you can try lulling your foes into a false sense of safety. But if they aren't fools they'll fear you, so this deck plays more defensive measures such Wall of Souls and Toxic Deluge. Grid Monitor and Steel Golem can also protect you while serving as poisoned gifts suitable for the pitiful ants who dare oppose your godhood. Likewise, Slaughter Pact or Pact of the Titan can protect Bolas's loyalty. They can also annihilate an opponent with a timely Sudden Substitution.

With the ability of Humble Defector on the stack, you can swap him away with your diabolical signature spell. You can also give your opponent a nice shiny Breakthrough, X = 0, and cackle as they discard their entire hand.

I included Warrior's Oath to show you that it exists. I likely wouldn't pay its price tag and instead include Spell Pierce, to help resolve your Oathbreaker. Your signature spell doesn't need any help.

What spells do you most desire to steal? And what devious gift do you hope to give? Let me know in a comment.